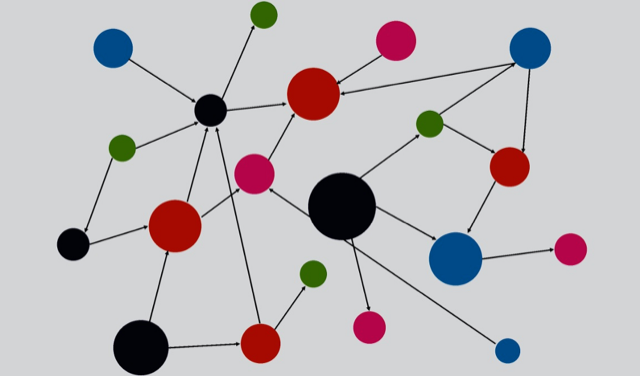 Ikea, Morgan Stanley, and AstraZeneca were among the companies that gathered at The Knowledge Graph Conference 2022 in New York City this week to discuss state-of-the-art data management.

Knowledge graphs are capturing the attention of corporates across sectors because they apply semantics to give context and relationships to data, providing a framework for data integration, unification, analytics and sharing.  Think of them as a flexible means of discovering facts and relationships between people, processes, applications and data, in ways that give companies new insights into their businesses, allowing them to create new services and improve R&D research.

During the conference a new benchmark study on the state of knowledge graph maturity conducted by the Knowledge Graph Conference and the Enterprise Knowledge Graph Foundation in conjunction with Content Strategies was released.   The study found that many firms have been exploring knowledge graph technology and a few have jumped in with both feet.  Those that have made the commitment are reaping the benefits by leveraging their data to manage their supply chains, enhance data discovery, and automate their business processes, conference speaker Michael Atkin, Managing Director of Content Strategies and long-time industry analyst, said in an interview with The Innovator.  But the study also revealed that many companies are still struggling to move their internal initiatives out of the experimental phase and into full operation, hampering their digital transformation.

Data is still isolated into business silos at many companies.  All too often this data has been transformed and renamed to match the requirements of the software that drives their applications.  And, “in addition to this ‘data incongruence,’ firms suffer from the limitations of relational technology that was state of the art two generations ago. Data is organized into columns and stored into tables with conflicting column names and with relationships that must be explicitly structured. “The net result is that companies are spending significant effort and countless hours moving data from one place to another and reconciling the meaning of the data,” says Atkin. His study found that firms recognize that this problem is a serious liability, he says.

The Business Case for Knowledge Graphs

Knowledge graphs can turn data from a ‘problem to be managed’ into data as a ‘resource to be exploited, says Atkin. They are a way of describing a few simple concepts that can change how firms manage their business.  These concepts were developed by DARPA, the research arm of the US Department of Defense, almost 25 years ago to address the challenges of technology fragmentation.  DARPA’s objective was to develop a new way to interpret data and decipher meaning to allow the military to react quickly and coherently to terrorist events and other forms of insurgency.

Cyber-crime, threats to national security or unraveling linked risk in any complex environment requires the ability to analyze large data sets.  That means there is the need to share data across federated and interdependent systems.  And that data can come from unreliable sources or be incomplete.  The DOD realized that there was no way to meet these information sharing needs until they solved their federation problem.

In response they shifted from ‘coupled pair’ technology to ‘triple store’ technology where data is organized into groups of three that contain subjects and objects that are linked together by predicates and verbs.  And these concepts are all precisely defined.  And once you define these concepts, you can link them together.  That is facilitated by an ontology which captures the meaning of information elements as well as their relationship in a form that can be automatically processed by computers.

The ability to do those things gives overwhelming value in terms of efficiency gains, analytical flexibility, and operational controls, says Atkin.  Companies want data “to be available and accessible when it is needed, in a format that is flexible to use, traceable as it flows across processes, testable as fit-for-purpose and self-describing so that they can use it as a building block for innovation,”  he said .The good news is that … “there is no reason why all of this is not achievable – right now – without a huge investment in technology – or massive disruption to the way organizations operate,” he says,

With knowledge graph capability, data integration is simplified because meaning has been standardized, says Atkin. Processes can be automated by reducing the need for reconciliation.  Firms get analytical flexibility and the ability to ask ‘what if’ questions of the data.  And firms get to speed up transformation by delivering a ‘digital twin’ of their company that encompasses all data points as well as the relationships between data elements.

To be sure, challenges must be overcome if companies are to reap the full benefits of knowledge graphs.  Company leaders need to understand the potential and put their full weight of support behind the transition.  Physical infrastructure costs must be budgeted; skill set gaps addressed, ontologies modelled, and data pipelines managed.  Significant organizational inertia and resistance from systems owners must also be overcome.

But all of this is doable, says Atkin.  If data owners get the buy-in of business leaders and semantic data management becomes a priority, the rest of the organization will follow.  Atkin maintains that … “the pathway out of the morass is straightforward – adopt semantic standards and implement best practices for data hygiene,” The bottom-line message from the benchmarking analysis is clear … “it is time to focus on building an information literacy campaign, and present a business case, that is both accurate and delivered in the language of business.  And that time is now.”

Facebook owner Meta on May 4 gave an early glimpse of its first physical store, which features a floor-to-ceiling screen for showing off games on its virtual reality headsets and rooms for testing video calling devices.The store, set to open on May 9, is located at the main campus for Meta’s Reality Labs unit, in the Silicon Valley town of Burlingame, California. The unit is developing the hardware products the company aims to sell there, including Ray-Ban smart glasses, Portal video-calling devices and Oculus VR headsets.

Finland’s IQM Quantum Computers has received €35 million from the European Investment Bank  to drive the development and commercialisation of its quantum processors built at Europe’s quantum-dedicated fabrication facilities in Espoo, Finland. The company is building on-premises quantum computers for supercomputing data centers and research labs and offers full access to its hardware. For industrial customers, IQM delivers a quantum advantage through a unique application-specific, co-design approach.  EIB President Werner Hoyer said ensuring that companies such as IQM are well-funded is key to positioning Europe as a technological leader worldwide.  For more on IQM read this 2020 story in The Innovator.

A paper published by the world’s main central bank umbrella group, the BIS, is calling for individuals and firms to be given more control over the data collected on them by banks, social media and other Big Tech firms.The boom in Internet-enabled mobile phones, apps and other high-tech gadgets in recent decades has led to an explosion of personal data that firms now harvest, process and sell.The Bank for International Settlements (BIS) paper published on May 5 said while most countries already have some laws around data use, most individuals still were not aware of what was at stake, or their rights over their data. Authorities should therefore adopt new data governance systems to “level the playing field between data subjects and data controllers,” the paper said. It called for requiring firms to get clearer consent to collect data, better explain how it was being used and make it easier to be accessed by those from whom it was harvested.

WPP and Epic Games Partner On The Metaverse

WPP and Epic Games, the interactive entertainment company and developer of Fortnite and Unreal Engine,  announced a new partnership to help WPP agencies deliver a new era of digital experiences for brands in the metaverse. The partnership will include a new training program to upskill thousands of WPP creatives and technologists on how to create custom brand experiences in Fortnite, and how to use Unreal Engine for real-time 3D creation and virtual production. This new metaverse curriculum will consist of three separate tracks for executives, creative practitioners, and media experts and strategists.

The supercharged advertising growth that some of the world’s largest technology companies reported during the pandemic is decelerating. A round of tech earnings last week made it starkly clear that the Covid-led surge in digital advertising has begun to ease. The slowdown was caused by a confluence of events, including inflation fears, supply-chain shortages, the war in Ukraine, a gradual return to normalcy two years into the pandemic, the continued rise of TikTok and Apple recent privacy changes.“We have not seen a collective set of headwinds for advertisers like this since the early 1980s,”  Michael Nathanson, an analyst at MoffettNathanson, told The Wall Street Journal.