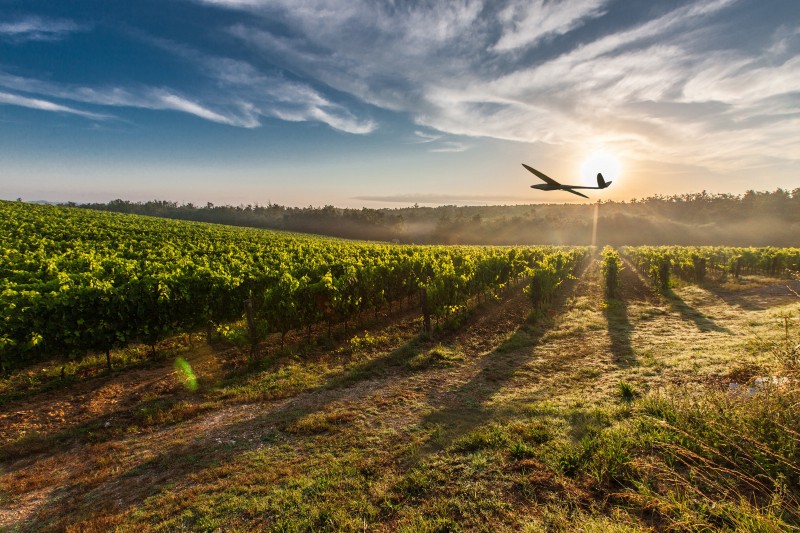 Delair sells fixed-wing commercial drones that can fly long distances, making them attractive to industries such as utilities, mining, construction, and agriculture. Based in Toulouse, France, the company pairs its hardware with a software platform for rapid data processing and visual analysis to create insight that improves decision making.

“As the hardware is spreading and getting adopted, the added value shifts downstream to the data processing,” says Delair CEO and co-founder Michaël de Lagarde. “Because what the customer wants is actionable business intelligence. And the gap between raw data and business is still a big gap.”

Delair has been on a roll this year. In early 2018, Delair was selected to be one of the Technology Pioneers for the World Economic Forum. The recognition boosts Delair’s international profile at a time when global commercial drone competition in is intensifying.

Founded in 2011, Delair got started at a time when buzz around consumer drones was rising. But the company was firmly fixed on commercial uses, which analysts now believe are where the real benefits of drones are being seen around the world.

Today, the company makes three main lines of autonomous, fixed-wing drones. At the low end, its UX11 weights 3.1 pounds, can fly distances as far as 53 km, and can remain in the sky up to 59 minutes. Next up is the DT18, weighing 4.4 pounds, with a range of 100 km and flying time of 120 minutes. Finally, the DT26 weights 40 pounds, and in some configurations can fly as long as 135 minutes at distances of 50 km.

The company serves industries such as construction, mining, security, and agriculture via its drones, its data gathering and analysis platform, and an advisory service designed to help companies better understand drones’ potential. This company does a lot of hand holding with new customers to help them understand how drones could fit into their business.

But one of the big challenges is also the ongoing regulatory environment. Delair’s more advanced drones can fly “beyond visual line of sight” or BVLOS. This industry term simply refers to the idea that the drone can fly to a point where the operator no long sees it directly. But this also tends to be where the regulations still limit use. As such, a big focus for Delair, as with many other commercial drone companies, is working with regulators to develop such regulations.

It’s the ability to fly a drone far out of sight where the real dramatic cost savings and data gathering can happen.

In Africa, where less than 30 percent of the continent is properly mapped, the company is looking to help national governments more accurately map their regions to assist with property ownership issues and tax collections. Closer to home, the company is working with French energy company EDF to use drones for inspecting energy towers, replacing the costly use of helicopters, or the dangerous and laborious task of a human scaling those edifices.

In both cases, while drones offer advantages in the short term, a human still has to get into a truck, move to a new spot, and re-deploy the drone. Eliminating those human interventions greatly increase the efficiency and cost savings, the company says.

Even so, Delair is growing fast, racing to keep up with demand for companies interested in the service drones are able to provide today. In the short term, this poses both a growing challenge and an opportunity. De Lagarde notes that drone users are now trying to manage the growing volume of data collected. As a result, he said the company’s drone data analytics platform has become the fastest-growing part of its business.

This platform can be used to create 2D and 3D models, mapping, and reports. The platform can also pull in data from other sources to further enhance its analytic capabilities.

Last year, this part of Delair’s business attracted the attention of Intel, which let to a new partnership for the Intel Insight Platform. Delair’s drone software program became the intelligence behind the platform, and is sold by Intel as a white label service and co-branded between the two companies. That partnership has gone well enough that two months ago, Intel Capital announced an investment in Delair for an undisclosed amount. Reportedly in double figures, this comes on top of $14.5 million in venture capital the company had already raised.

The latest investment was intended to help grow the software and analytics side of Delair’s business, de Lagarde said. Currently, the company still makes most of its money selling the drones. But de Legrande believes software will eventually surpass drones. Out of its 130 total employees, about 40 are dedicated to the software. But that latter number is expected to double.

To bolster that part of the business, Delair also announced in late October that it acquired the key assets of Airware, a U.S.-based developer of software analytics tools for drone-based data. The acquisition gives Delair a bigger presence in the U.S. But it also includes Airwave’s Paris-based engineering and customer service team in Paris, which had been acquired via a 2016 deal for a drone analytics company called Redbird.

That former Redbird team remains in Paris and will continue working on data services as bringing more artificial intelligence into Delair’s data analysis tools, which de Lagarde says are key to the company’s future.

“Software absolutely will be big,” he ays. “Right now, software is kind of negligible. It was about 10 percent of revenue in 2017. In five years, we anticipate it will be the biggest source of revenue. That’s where the value is shifting.”