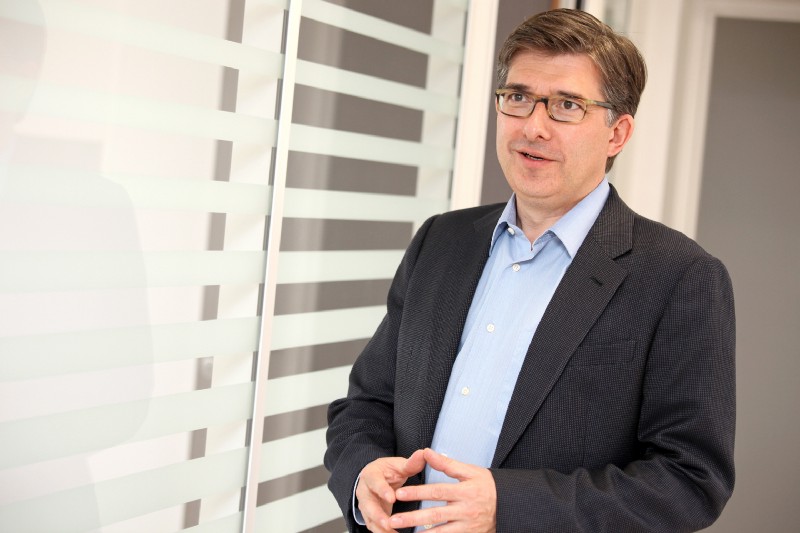 Frédéric Halley, a native of Paris, is a London-based operating partner at NextWorld Capital, a Silicon Valley-based venture capital fund that specializes in investing in enterprise startups and helping them grow into global leaders. The firm has built a global enterprise platform that is designed to bring together B2B startup with corporates. NextWorld advisors include C-Suite and VP-level executives at over 100 of the largest global corporates. As part of its initiative to connect entrepreneurs and corporates NextWorld organizes a series of events. Next up is Innovaton Forum Paris on November 28. (include link https://nextworldcapitalparis2018.splashthat.com/), which will feature speakers from some leading Silicon Valley companies and top European corporates. The Innovator is a media sponsor of the event.

Halley has extensive experience working with venture-backed technology companies as both a senior operational executive and as an advisor. Before joining Next World Capital in 2012, Halley held leadership positions in several venture-backed companies. He was the COO of Netsize (acquired by Gemalto), GM of Pertinence (acquired by Dassault Systemes), and Sales Director for SLP Infoware (acquired by Gemalto). He started his career as a consultant for Accenture and the Boston Consulting Group.

Halley recently spoke to The Innovator about how corporates can leverage technology and manage digital transformation.

Q : How does NextWorld Capital work with corporates ?

FH : The fund was set up in 2011. I joined in 2012 and was charged with helping to build the global entreprise platform. Initially the thinking was that Europe represents 30% to 35% of the global software market so if a startup wants to be a global leader it needs to succeed in this market. As a fund we decided to help U.S. startups get into Europe and started building long-term relationships with corporates across Europe. These kinds of relationships are helpful to our portfolio companies but we also find it extremely valuable. It is all about the conversation with the corporates : we ask them about how they think about working with startups, the technology they are looking for and how we might adapt our startups’ offerings to their needs. This is very valuable for us as investors.

It is interesting to look at how things have changed since 2011. Back then a lot of digital transformation came from the CIO’s office. In the last three or four years there has been a shift and now a lot of that work is being picked up by chief digital officers or heads of innovation. As a fund we are equally happy working with either side. Some innovation teams are still early on the maturity curve. They don’t necessarily have a budget to pay for the solutions and make things happen, which can make it frustrating for startups engaging with them. In the last six months we are starting to see some chief digital officers reporting to the CIO. That has the advantage of connecting innovation to buying the tech in order to make things happen. It is too early to say if this is a general trend.

The way we work with corporates has several components. A lot of it is focused on one-to-one discussions, we also run events across Europe where we bring together corporate innovators and the startups and try to have people hear both sides of the discussion. Many startups think corporate are too slow and on the other side corporates need to have a much more realistic understanding of what startups can do. They can be over optimistic about what can be delivered on a global scale. A third way is through our briefing center in San Francisco where we host European executive teams and introduce them to startup that are relevant to them. There is value in that exercise to get executives away from their desks and email for three or four days, get them to a different place and expose them to new technologies, new ways of working and new ways of thinking.

Q : Visiting Silicon Valley is one thing. Infusing its ethos into the corporation is another. The title for your Paris summit is « Teaching Elephants To Rap. » From your perspective how much progress have European corporates made when it comes to digital transformation ?

FH : For some corporates it is still about box ticking. Just saying ‘I have seen tens of startup pitches’ has no value. It is fun but there is really nothing to it. I spoke with a big CAC 40 company recently and they told me they had run 500 proof of concepts (POCs) last year. However, they recognized that close to zero will ever be deployed. It is great to do pilots but if nothing really tangible happens afterwards what is the point ? Deploying something and impacting the real business takes energy and commitment from the top. One of the difficulties is that startups are exciting and entrepreneurs are smart so it is very easy to get caught up in doing things with young entrepreneurs but what is needed is to do a limited number of POCs per year and have as a target for half of them to be deployed. I think this is a mindset that is not there yet. If you work with very early stage startups a lot of these young companies will struggle to deploy internationally because they do not have the infrastructure and experience. Corporates should work with slightly more mature startups because that is where you can get real impact.

Q : How should big corporates work with startups ?

FH :Corporate Venture is challenging model. Acquisition can be a good solution but it is often difficult to make it work. For European corporates it is very challenging to buy U.S. startups. The valuations are very high right now, you can spend hundreds of millions for companies that only have $20 million or $30 million in revenues. European startups tend to be slightly cheaper. One of the most challenging aspect of the acquisition is the retention of the team. It is the key issue and the most difficult point. If the startup you buy has a superstar CEO, do they want to spend three to five years working for an old traditional firm ? Not necessarily! If you find a great company with a great team and the team leaves after six months what have you bought ? This is why we tell our network of corporate partners that acquisitions are difficult, they can be a worthy exercise, but it takes a lot of work to find the right target and specially to leverage it and transform it into a real business. There are more failures than successes.

If a corporate does buy a startup a good solution is to keep it apart and run it separately for quite a long time. If it merges the startup with the core business it can involuntarily suffocate the acquired company. Keeping the innovative part is important to get to a critical size and validate the business model. Major success should be defined as something that is completely transformational for the company.

Buying from startups and doing partnerships is a good idea but commercial relationships need to be more flexible and adapted to working with small companies. How do you run a pilot ? Startups need predictability. Do the negotiations go on for six months or a couple of weeks ? And what is the roadmap for the deployment process ? If a corporate can clarify these points it is extremely useful. Some of the corporate processes kill any kind of innovation.

There has been tremendous progress at big corporates. Today it is rare to meet a CEO or CIO who hasn’t understood the importance of digital transformation. There has also been a major realization that innovation will come from the startups one way or another. However, there are still things to do. One recommendation I give to corporates is to focus on the impact of the deployment and the adoption of technology in a broad, deep way. This has to be driven by a vision and the objective should be to impact most of the business.

My hope is that the heads of digital innovation or chief digital officers will end up being transient teams because innovation will just be baked into the core of companies. Companies don’t have chief electricity officers because everybody knows how to use electricity. The same should become true for digital.

Q : What should corporates being doing now ?

FH : Structure and collect data now and don’t outsource that function to Google or any other big player because you will be helping them to kill you. Maybe you don’t have an obvious use case immediately but you will eventually need to use all that data. Corporates have a strong card to play because they have potentially more data about their sector than anyone else. Play that card by partnering with startups to leverage your data and become smart and powerful.