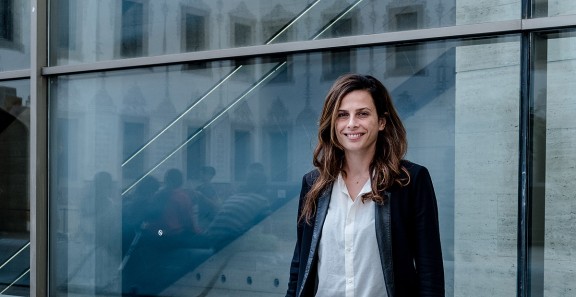 Bria, who has been awarded the honor of Commander of Merit of the Italian Republic, has a PhD in Innovation and Entrepreneurship from Imperial College, London and MSc on Digital Economy from the University of London, Birkbeck. As Senior Program Lead at Nesta, the UK Innovation Agency, she  was the leader of the D-CENT project, the biggest European Project on digital democracy platforms and crypto currencies. She also led the DSI4EU project, advising the EU on digital innovation policies and purpose-driven innovation. Bria, a scheduled speaker at the 4YFN, an innovation conference taking place in Barcelona February 28-March 3, recently spoke to The Innovator about Europe’s innovation strategy and technological sovereignty.

Q. There is a lot of talk about technological sovereignty in Europe these days. You have said that Europe has a unique chance to be a force for change, by proposing a sustainable and more democratic, human-centred, digital economy differentiating itself from  US digital capitalism and the authoritarian model of Chinese capitalism. What, in your opinion, are the key building blocks that need to be put into place to make that a reality?

FB: I have been advocating for Europe to put forward a third model beyond Big Tech’s surveillance capitalism and the Big State, China’s digital authoritarianism, what I call Big Democracy, a new type of digital humanism grounded in democracy, fundamental rights, sustainability, and autonomy. For Europe to defend its digital sovereignty requires a bold and forward-looking policy agenda, since today digital sovereignty also means political and economic sovereignty. Brussels has channeled most of its efforts into tighter, more comprehensive regulation of the tech sector, promising to curb the market dominance of digital platforms with regulations such as the Digital Services Act, the Digital Market Act and the Data Governance Act, earning itself the honor of being the world’s leading regulatory superpower.  Being seen as a regulatory superpower is important but not enough. I think other important moves are needed:

Firstly, Brussels needs to compete on scientific and technological innovation, with a strategic approach to taking back control over the technology stack and digital industrial policy. Some 20% of the NextGenerationEU recovery plan will be invested into critical technologies related to AI, chips, 5G, cloud, quantum, and cybersecurity. This is essential to stay competitive in the strategic value chains of the future, as seen with shortages of foreign-made chips hitting key industries, such as automotive, manufacturing and logistics.

Third, and most essential, I think that for Europe to compete means putting forward our cultural strength, our democratic values and principles. The big goal should be defending innovation for the public interest, the data sovereignty of European citizens, and their digital rights. The EU should fund an innovation ecosystem based on ethical standards, open source, interoperability, and open tech specifications to develop privacy-enhancing technologies and protocols for the next generation social Internet.

Q.Do you see such a shift helping traditional European businesses who are struggling to fend off new forms of competition and looking for new business models?

Q. There is a real race in terms of strategic investments in future technologies, to obtain long-term geo-political and industrial advantages. That race is mainly between the U.S. and China. Europe is a very distant third. How do you see Italy’s Innovation Fund, other local funds, such as France’s Bpi and Europe’s new multi-billion fund for tech sovereignty, helping to close that gap?

FB We have an historic opportunity in Europe today, with 20% of the NextGenerationEU program and the Recovery and Resilient Facility investing in digital transformation. Around €400 billion will be invested in critical digital infrastructures and technological capabilities. We should use this money well, making sure it goes in the right places and that it is used to build Europe’s technological sovereignty. It should be easy for tech innovators to scale up to the pan-European and global level. What is still missing is access to capital, and larger EU-wide markets in risk taking equity; with a fully functioning single market and pan-European regulatory regimes. Regarding the EU venture market, we are making huge progress. In Europe, a record $100 billion in invested capital has been reached and the overall value of Europe’s tech ecosystem is also soaring, now exceeding €3 trillion. For this reason, the European Innovation Council has launched its own €3 billion venture capital fund, and last week in Paris, as part of the Scale-Up Europe initiative, we signed an agreement for the creation of the European Tech Champion Initiative, the largest fund of funds for European Venture Capital with a €10 billion target, shared by 16 EU countries and managed by the European Investment Fund. This initiative aims to reach €10 billion for the creation of 10-20 pan-European VC funds that will allow startups to grow successfully to become future European technological champions. Italy is participating in this EU-wide initiative with our own National Innovation Fund that I chair, that has today €5 billion endowment to boost the Italian innovation ecosystem. We were created two years ago, just before the beginning of the pandemic, and we have already approved total investments of over € 720 million in 19 VC funds and 14 acceleration programs, three technology transfer poles in advanced robotics, sustainability tech and life sciences, and directly in over 190 startups, indirectly impacting more than 1000 startups in the ecosystem. I think these are good numbers, showing that the market is ready to grow and that the startup and scale up ecosystem is an important part of our country’s new and forward-looking industrial strategy focused on the dual green and digital transformations.

Q. When you were the city of Barcelona’s Chief Technology Officer you oversaw a trial of DECODE, a project to give citizens control of their data. Can you tell us more about the Barcelona trial? What are the barriers to scaling this across Europe?

FB: DECODE was one of the first Europe-wide projects funded by the European Commission to preserve the data sovereignty of European citizens, led by the city of Barcelona, with the participation of the city of Amsterdam and 13 other organizations from across Europe. In Barcelona we were determined to put new technologies (connectivity, data, sensors, and platforms) at the service of people, to improve their lives, for example by focusing on electric sustainable mobility and the fight against climate change and pollution and developing new data infrastructures managed as a common good. It was a vision of the smart city that starts with citizens and with the great urban, social and environmental challenges that need be solved rather than from the technology itself. DECODE addressed sustainable mobility, the fight against climate change, ecological transition, education and health. Furthermore, we involved citizens and made them actively participate in political decisions, by carrying out one of the largest participatory democracy experiments in the world, thanks to a digital platform developed by us (decidim.org) that is now used by over 100 cities and governments in 20 countries around the world. DECODE developed rules, policies, standards, and a privacy-enhancing decentralized data infrastructure based on the blockchain and on new crypto protocols to allow citizens to control what data they keep private, what data they share, with whom and on what terms. This means that citizens are able to take back sovereignty and control over their own data and share it to improve public services, make better decisions, and transform their city. This is all very positive I think and served as a pioneering experiment about data democracy and data trust. The limit was that we were too early, and that the technology needs to be robust and scale across Europe in order to be adopted and used by citizens, possibly linked to a privacy-preserving digital ID system and a public digital payment system. Unfortunately, despite the growth of so-called Web 3.0 betting on decentralized technologies, today only Big Tech seem to be positioned to scale such crypto solutions, but I still believe there should be public alternatives at European scale, possibly run at city level and with citizens in control.

Q. Despite these challenges do you think the shift to a more user-centric data economy could define future platform innovation? What would that look like?

FB: Today’s default solution, the data privacy-violating business models of technology platforms, is no longer sustainable. For me digital sovereignty also means to shift the business model from surveillance capitalism and from a digital economy that’s mainly funded via advertising and via the manipulation and monetization of personal information and data to a more sustainable and resilient economic model. Creating open data trusts with transparent access rules will allow startups, innovators, local companies, and the social economy to build on a data commons and develop future AI-driven services and solutions in healthcare, mobility and climate. This might involve the development of democratic data governance models such as data trusts, where the data, once anonymized, might be shared in the name of greater public good. This should be coupled with large public investments and a boost in the demand for native “made in Europe” tech products suited to European conditions and preferences through ethical standards setting, judicious subsidies and public procurement. This can help create public options for apps that effectively create marketplaces for services, such as smart mobility and smart cities, designed to plug in local tax, labour, and licencing rules.