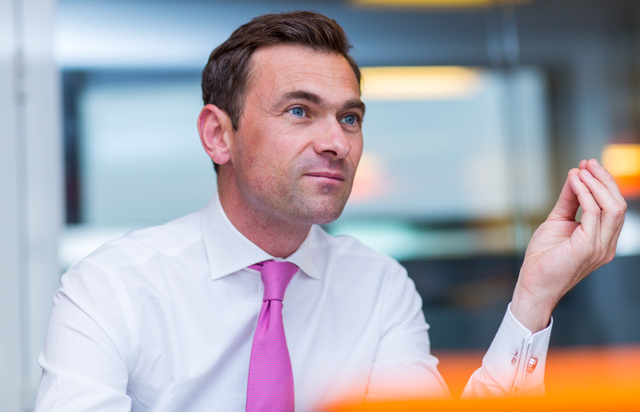 Benoît Legrand, Chief Innovation Officer of ING and CEO of ING Ventures, began his career as an investment banker at Bank Bruxelles Lambert in 1994, before it became ING Belgium. After founding his own start-up company in retail distribution, he rejoined the group a few years later, holding positions in investment banking and in retail and private banking covering diverse areas such as marketing, sales, branch distribution and product management in Belgium, Singapore, Poland, the Netherlands and France.

In 2007 Legrand was appointed to the Executive Board of ING Nederland where he lead the total make-over of private banking and securities and took an active part in the merger of Postbank and ING Bank. In 2010 he became CEO of ING Direct France and Country CEO ING France in 2013, after merging all retail, commercial banking and real estate activities in France into one single integrated entity. In 2015, Legrand was appointed President of ING Bank France and Global Head of FinTech and subsequently CEO of ING Ventures, ING’s €300 million corporate venture capital arm. Legrand, who took on the role of ING’s Chief Innovation Officer in 2018, was a speaker at the Fintech Forum in Paris this week. While there he agreed to speak to The Innovator about the bank’s digital transformation strategy.

Q: In his upcoming book “Doing Digital: Lessons From Leaders” financial services expert Chris Skinner selected ING as one of the seven most innovative banks in the world. What do you see as the bank’s differentiator?

BL: When it comes to digital transformation banks have very similar plans. The difference is in the execution. It all about the people and culture and how you get 53,000 people working together effectively. It starts with strong leadership that genuinely supports the transformation ahead of us as something that we need to do and also sees it as an opportunity more than a pain. It is about mobilizing people and assets and building teams to meet this challenge. I think this is part of the character of ING. The second thing is we genuinely believe we have to do this for the customer, to become even more customer-centric.

The customer has to feel it, the interactions with the bank have to simplify his or her life and the maintenance fees on their activities should be as low as possible. The third leg is connection to an ecosystem: building platforms where people stick not because they are obliged to stick but because you are free to stick and you want to stay within the ecosystem.

Q: Can you give us an example?

BL: We have built an ecosystem in the UK through an app called Yolt which allows users to manage accounts in different banks for different financial services in one place. Yolt is one of the first examples of a company [SM(1] providing a platform for customers to manage money held by competitors and we now have over more than one million registered users for this service in the United Kingdom, France and Italy. The app integrates the users’ bank accounts (including savings and credit card accounts) in one mobile‘dashboard. It also lets them know how many days are left till pay day, predicts their bank balance based on their direct debits and points out any significant changes in their spending patterns. All of the traditional banks and the neo banks are all fighting for customers. We are positioning ourselves differently by adding a top layer to aggregate all of this data and give consumers insights into better ways to manage their money. We are adding subscriptions such as utility accounts to help consumers manage those. Cobase, another ING company, is now offering a similar wholesale banking services to treasurers so there is one place treasurers can go to manage all their bank accounts but also over time gives us a platform to offer these customers new types of products. The bigger the platform, the more suppliers, and the more suppliers, more customers. And via ING Ventures we have taken minority stakes in several companies like for example Fintonic [a Spanish startup that also operates in Mexico and Chile] which has built a platform that allows for the aggregation of customer data and also does credit scoring, helping customers to get access to loans and ING to get access to new customers.

Q: What do you see as your major challenges as
Ing’s Chief Innovation Officer?

BL: The challenge is to develop those things alongside the current businesses because you need the current business to continue. You need to build new businesses adjacent to the bank and sometimes outside to prevent any slowdown in processes. We need to recruit different people alongside of people from the inside but not place the new business too far out, otherwise you lose the power and the funding. The point is to put the new businesses in an environment that enables them to grow fast and deploy. If you throw small seeds in the wind they die, it is normal. You need to put them in a greenhouse to protect them until they are big enough to work within the bank and be a profit generation machine.

Q: There has been talk here at the Fintech Forum about how ING’s new headquarters in Amsterdam represents a different, more open type of bank. Can you elaborate?

BL: Our new headquarters has only five floors and a Silicon Valley spirit. On one of the floors we host non-fintech startups in areas such as urbanization and digital identity because we want to work together and open ourselves to the world. We have also initiated Cumulus Park, a collaborative innovation district in Amsterdam Southeast now supported by the municipality of Amsterdam, the Amsterdam University of Applied Science and the ROC van Amsterdam. It offers a network, inspiration, processes and physical spaces for students, mid-sized corporates, innovators, researchers and local entrepreneurs.

Q: What advice do you have for other chief innovation officers based on your experience at the bank?

BL: Ensure that the CEO of your company is genuinely supporting this otherwise quit immediately because you will become increasingly frustrated. Second is find the right balance. Understand that transforming the culture of the organization will take 10 to 15 years so you have to in parallel build adjacencies to your business and, without arrogance, build up an environment that is new-business friendly. The third one is be patiently impatient. You need a sense of urgency but know that it takes long years for a digital transformation effort to be very strong and deliver fruit. The energy behind this effort should be there. You will need resilience. We as humans do not like change. When you are talking about 53,000 individuals it is a massive undertaking. You won’t win in the short term by fighting. You will need to be creative, positive and daring.