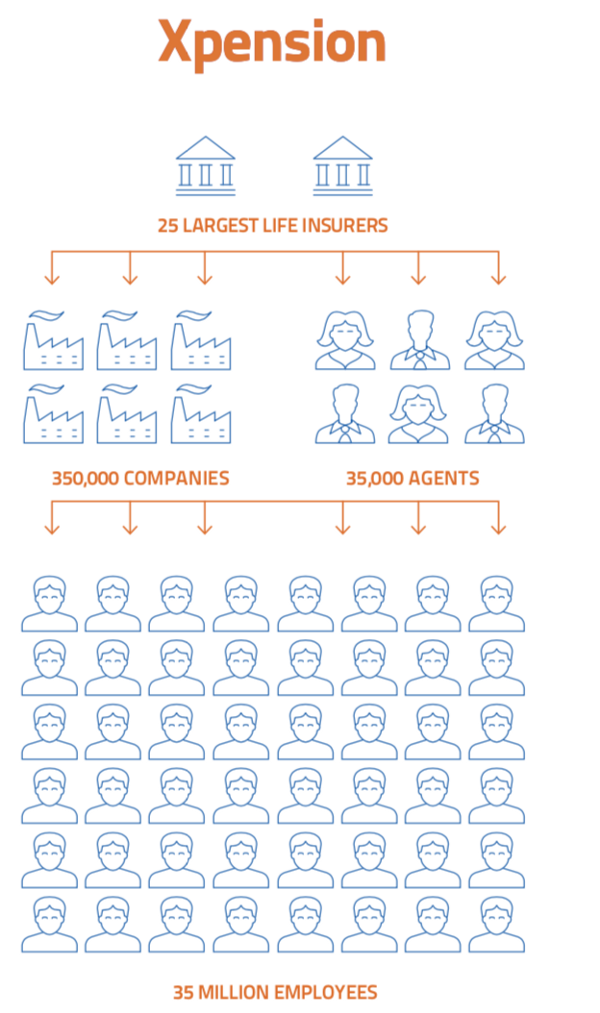 The corporate pension system in Europe, which is bogged down by bureaucracy and mountains of paperwork, is badly in need of a digital update.

Changes — such as moving to a new employer and taking your pension with you, or simply updating a surname after marriage — require loads of paper forms and faxes, causing headaches and months of delays. And the inefficiency carries a huge price tag.

There are about 15 million corporate pension polices in Germany alone and about 100 million in Europe. The estimated overhead per policy per annum is between €100 and €200. The typical savings in a corporate pension is around €1000 per person per year. “If €200 of that or 20% per annum is wasted over 30 years it makes a huge difference: people have significantly less to retire on,” says Malte Dummel, chief financial officer at Xpension, a German startup.

Xpension is using the platform business model to build a new type of ecosystem: an independent software-as-a-service that provides a shared service interface among pension product providers, insurance agents, companies and employees. The platform aims to facilitate and slash the cost of creating new and managing existing pension policies.

The Munich-based startup is currently focusing on Germany, the largest and most complex market in Europe with a €3 billion annual cost for administrating employer-related pension plans. There are over 80 life insurers in Germany, 350,000 companies and around 50 worker unions. “Only a digital solution can solve this,” says Xpension chairman Lars Hinrichs, founder of the European career-oriented social network Xing, which has a current market capitalization of more than $1.5 billion .

Although Xpension’s approach is disruptive it has buy-in from traditional industry players. Global insurer Talanx was the first to join Xpension. Others quickly followed. Twenty of Germany’s biggest life insurers, including Zurich, Signal Iduna and Sparkasse Verischerung, which together represent the majority of life insurers in Germany, more than 5,000 insurance agents, and more than 1,800 companies are already using the platform, the company says. It sees more opportunities for growth of the platform in Germany by targeting the market for private pensions as well as “social partners” i.e. the employer and union groups, who, thanks to a new law, will increasingly help employees choose and enroll in pension funds. The startup also has ambitious plans to expand the Xpension platform to other countries on the Continent.

Xpension’s creation comes at a time when public pensions are shrinking significantly, leading to an increase in demand for work-related and private pensions. The upside for Europe’s aging population is that the digital platform will makes pensions more transparent, understandable and accessible for everybody, says Hinrichs, a World Economic Forum Young Global Leader.

When Xpension CEO Martin Bockelmann, an insurance industry veteran, founded the company in 2007 it, like every other player in the industry, was set up to work in an analogue world. He saw the potential in digitization and built up a team and investors who shared that vision. “We looked at the value chain and realized we could change the entire model of the industry,” he says.

Individual insurance companies could not create such an ecosystem, says Bockelmann. The platform had to be vendor-independent in order to be inclusive. As the provider of the only neutral, fully-digital platform in Germany Xpension reduces the cost of administering pension polices for insurers and companies by up to 80%, facilitates more effective distribution by agents through a consumer-friendly advisory software and rapid processing, and enables consumers to be better informed about one of the most important financial decisions they will make, he says.

The administration and distribution of work-related pension polices in Germany is often manual and requires 30 or more different steps, is slow (six months or longer in some cases) and complex, with some 8,000 variables. It is also costly for insurers, companies and agents who spend an estimated 25 million hours or more per year managing them, says company CFO Dummel, who previously spent eight years at Goldman Sachs in pension advisory, corporate finance and technology M &A.

In October Xpension raised a $24 million funding round led by Armada Investment. Daniel S. Aegerter, Armada’s Executive Chairman and founder of Tradex Technologies, a B2B software company, joined Xpension’s Supervisory Board, which also includes Hinrichs and Herbert Henzler, the former European CEO of McKinsey. Existing investors, led by Hinrichs, plus an international network of 20 venture capital, technology and insurance industry veterans, also participated in the round.

Xpension says it plans to use part of the new funding to roll out technology that will help industry players implement a 2018 German law that mandates sector-wide auto-enrollment in corporate pension plans.

The new German law gives employer and union groups the power to oversee work-related pension adoption and help employees with informed decision-making. So, in parallel to working with insurers, Xpension is partnering with these employer and union groups. These groups can distribute Xpension consumer accounts directly to their members, helping the startup’s platform quickly reach up to 10 million employees looking for information about pensions.

Xpension allows employees and consumers to manage their own pension policies, making it easy for them to estimate their retirement income gap and transfer policies after a job change, says Dummel. The startup is also planning to target the market for private pension savings, a segment with €2 trillion in assets under management in Germany alone.

Xpension does not target consumers or corporations directly. “We target the one stakeholder who is hurting the most — and that is the insurer, because they have the highest cost base,” says Dummel. On top of a subscription model its pricing is success-based, driven by a share of costs saved or leads generated, creating a strong incentive for insurers and agents to test and then typically keep using its platform.

The B2B2C multiplier effect could help Xpension become one of Europe’s next unicorns, the term used for businesses valued at €1 billion or more, says Hinrichs.

“There are similar challenges in other European markets,” says Hinrichs. And Xpension may eventually target them. “But Germany in itself is a huge market and we have only targeted one sliver of that market so far,” he says. “There is enormous potential to expand in this market alone.”