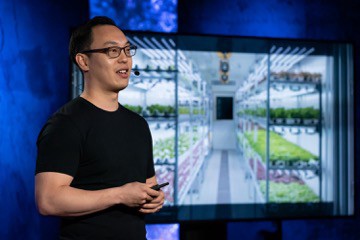 Real estate developers, super market chains, and hotels groups can either buy or lease the company’s indoor farms. Alesca Life has already deployed the hydroponic farms in China, the United Arab Emirates, and Singapore and expects to deploy in South Africa and Saudi Arabia by year’s end, says CEO Stuart Oda, a former investment banker for Bank of America Merrill Lynch. He says the company recently signed an agreement to deliver 1,000 container farms across projects in China, the Middle East, and Southern Africa.

Alesca Life currently does not grow staples commercially such as corn, wheat or rice. It focuses on growing leafy greens, herbs, and microgreens such as lettuce, kale, arugula, basil, and pea sprouts using hydroponics, a method of growing plants in nutrient-fortified water without any soil.

Oda says his startup’s urban farms use 90% to 95% less water, fertilizer and land and no chemical pesticides, herbicides, or fungicides compared to traditional agricultural methods, but there is still significant opportunity to improve the efficiency of these farms. What’s more these controlled environment farms cut down on labor costs by automating all of the critical growing processes using proprietary software. Alesca Life’s “Internet-of-Things” sensor boxes inside the farms monitor the environment and crops, and most aspects of the operation can be controlled remotely through a smartphone app.

Beyond efficiencies, Oda says Alesca Life’s urban farms solve two other major challenges. Each year some 600 million people globally are sickened by contaminated food with a disproportionate number of cases being reported in emerging market countries. Standardizing the way food is produced and growing it indoors using purified water, air, and nutrients would help mitigate some of the risks and go a long way towards ensuring that there is enough safe, healthy food, he says.

In other places, such as the UAE, growing locally would cut down on the costs of importing certain fresh foods and save an enormous amount of water in the process. Finally, urban hydroponic farming also could alleviate an anticipated shortage of farmers due to the global trend of urbanization, Oda says.

Alesca Life’s goal is to democratize access to fresh and nutritious produce by democratizing the means and knowledge of food production and make it more localized and data driven in the process, says Oda. « Our team goes down to the procurement of the plastic resins and electronic components to ensure the highest standards of food safety, » he says. « Our operational management software optimizes the farm’s productivity, efficiency, consistency, traceability and safety, and this allows our team to train an individual with no agricultural background to operate a commercial farm within six weeks. »

Alesca Life is one of a burgeoning crop of ag tech startup attracting funding. This is due in part to the major challenges facing the global agricultural industry and the anticipated increase in the size and density of future urban city centers: by 2050 demand is expected to increase by at least 58%, according to a recent report by research firm CB Insights.

While Alesca Life is focusing on developing markets, Square Roots, an urban indoor farming startup that grows greens and herbs inside shipping containers in Brooklyn, is focusing on satisfying the need for fresh locally grown food in the U.S. It has announced plans to expand across the U.S. through a partnership with Gordon Food Service, a North American food distributor with several distribution centers and 175 retail locations.

A recent research report from Arizton predicts the U.S. vertical farming industry alone will reach $3 billion by 2024, growing at a CAGR of more than 24% between 2018–2024. At the same time, the urban and indoor farming industries in global metropolitan city centers such as Beijing, Dubai and Singapore are starting to deploy the technology at scale in hopes of supplementing their existing food supply chains.