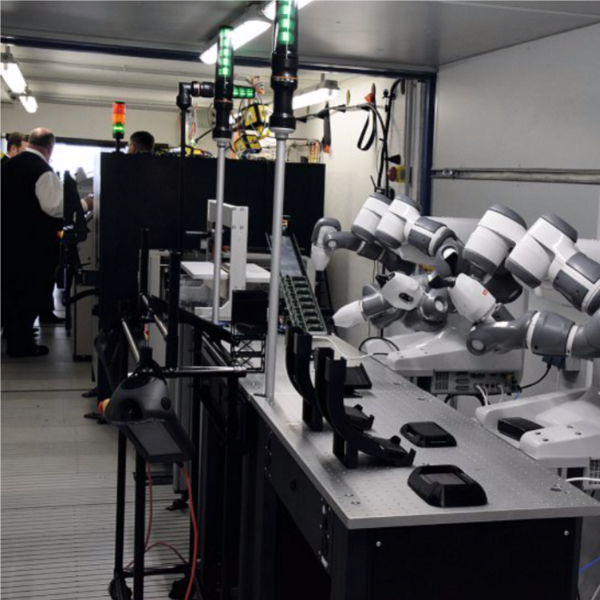 Nokia and its partners are offering an agile — and portable — form of Industry 4.0 production.

Traditional manufacturers are under market pressure to work faster and be more flexible at the same time they are making the slow,and sometimes painful, transition to digital. Enter Nokia’s Factory-in- a-Box, which turns cargo containers into mini-manufacturing sites, replete with high-speed Internet of Things (IoT) connectivity, robotic assembly and other Industry 4.0 technologies. The factory-in-a-box can be packed, transported and brought into service at a new location within a matter of hours.

Research firm Gartner calls it “a creative way to decentralize manufacturing capacity into smaller, portable sites supported by an ecosystem of partners.” Nokia’s idea originated as it looked toward the supply chain of the future, with the introduction of robotics, IoT solutions, and the cloud. It is part of Nokia’s Conscious Factory project, the company’s vision of how factories and networks should work together, says Johannes Giloth, senior vice president of global operations and chief procurement officer at Nokia.The project was accelerated with the launch of Nokia’s Digital Creativity Lab in Munich, Germany, toward the end of 2017. The final step in the proof of concept was the creation of a moveable mini electronics factory that was able to complete the full manufacturing of a printed circuit board as well as robotic assembly and testing. A Nokia-led group — which includes Factory-in-a-Box partners Beta Layout, DHL, Fuji, HARTING, Isel, Isolec, MTEK Consulting, Mycronic, Rehm Thermal Systems, Viscom and 42Q — showcased this application at Hannover Messe, a German industrial technology trade show, in April.

Manufacturing inside the containers is not limited to making electronics, says Giloth. “We started with electronics due to the specific needs of that industry but the Factory-in- a-Box is industry agnostic,” he says. Manufacturers can’t use the portable factories for die casting, a metal casting process that involves forcing molten metal under high pressure into a mold, but they can make anything that requires 3D printers to be connected together.

“There are endless use cases,” Giloth says. Among them:

— Assembly in country of origin: A container can be driven or shipped to a location, build the required volume locally, and then be moved again.

— New product introduction: Time to market is a competitive advantage. The Factory-in-a-Box can be used for fast prototyping of new products and quick fixes, services that could appeal to startups as well as traditional manufacturers. When they are ready for mass production, they can go elsewhere.

— Disaster recovery: When a natural or man-made disaster strikes a business a portable plant can help deliver critical customer orders.

— Ramping up and down: Factory- in-a-box can be a handy standby solution, helping enhance capacity when needed.

— Training: The portable unit can be used to train factory workers.

— Limited trials: Universities could use the mobile units for specific projects or experiments.

The containers are Lego-like so manufacturers can easily configure more than one on-site. Pricing depends on use cases, Golith says. Nokia expects that big manufacturers like FoxConn or Flextronics might be interested in buying 10 or more of the portable factories and keep them on hand to enhance capacity as needed, Giloth says. Smaller manufacturers, startups or universities are likely to rent them. The rental fee will depend on what kind of equipment and connectivity is required for particular applications. Giloth says Nokia expects to sign its first commercial contracts for its Factory-in-a-Box in the coming months.