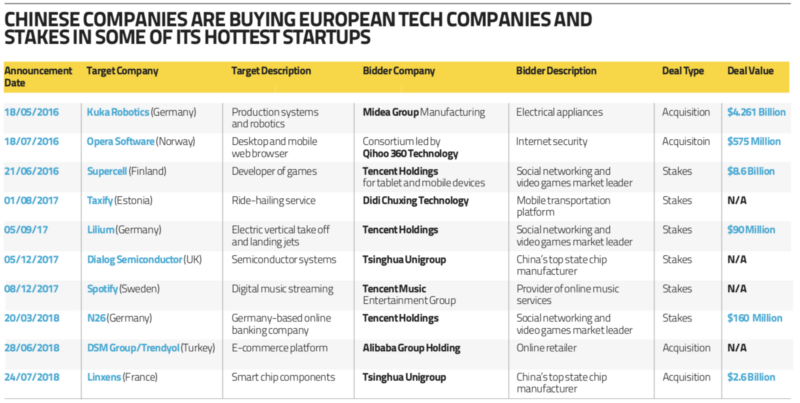 — It is early days, but there is potential for collaboration between European and Chinese tech companies

Babylon, the London-based digital health startup that uses artificial intelligence (AI) to assess illness, started out by trialing its service in the U.K. with Britain’s National Health Service and expanded into a few other countries, attracting some 1.4 million users. In April it struck a deal with the Chinese internet giant Tencent to offer its technology on the group’s WeChat social messaging platform, gaining access overnight to its almost one billion users.

Deals like this are every European startup’s dream. But they remain few and far between.The reverse is also true. Europe’s fragmented market is daunting for the Chinese. European customers have so far not embraced Internet services that are very popular in China, such as the do-it-all messaging app WeChat. So for now, Chinese tech companies are mainly buying up Europe’s technology and taking stakes in some of its best-known startupssuchasthemusicstreamingserviceSpotifyandSupercell,a mobile gaming company. (See the chart.)

Still, the potential for collaboration is promising. That is why Tony A. Verb, a Hungarian serial entrepreneur turned venture capitalist who lives in China, plans to launch a bridge fund between Europe and Asia called Greater Bay Ventures. “If Chinese and Asian expertise and distribution channels join forces with European intellectual property I see an incredible opportunity for European entrepreneurs and even SMEs and spin-offs,” says Verb. “There is an opportunity to build this capability both in Asia and in Europe. European companies can benefit from Asian distribution and I feel within five to 10 years we can help Asian companies move into Europe.” Opportunities to collaborate on health services are early indicators of this. It is as yet unclear how much success Babylon Health is having in China. The company declined to provide an update on its collaboration with Tencent, which has expanded its focus to include applying AI to medical diagnosis. Tencent has also partnered with UK-based Medopad, which brings AI to remote patient monitoring. Medopad has signed over $120 million in China trade deals, notes a report by the research firm CB Insights.

And Dr. Thomas Wilckens, a German medical doctor and entrepreneur who founded the LinkedIn group Precision Medicine Insight, says he believes there is big potential for collaboration on precision medicine, an area that China is targeting with billions in funding. (See the story on page 34.) “China is pouring a lot of money into precision medicine opportunities but has not yet caught up technology-wise,” says Wilckens, who is CEO of InnVentis, a pharmaceutical company that uses Big Data and machine learning. “Now they are very aggressively looking to companies from Europe and Israel to transfer know-how. I think this is an opportunity for Europe and Israel to leap into the future with technology development pushed forward with Chinese money.”

Other European startups — such as Farfetch, a luxury e-commerce platform — are attempting to enter the Chinese market directly, as is Ledger, a French company specializing in hardware wallets that allow people to store their Bitcoin and Ethereum holdings offline without fear of being hacked.

But investors interviewed were hard-pressed to come up with other examples. With good reason. “The Chinese market is a market with high potential of growth, however it is a tough market (very competitive, high regulation and cultural barriers), and it is often more expensive and takes longer than expected to be successful in this market,” says Anne J. Quenedey, a Hong Kong-based lawyer for Baker & McKenzie who has worked with tech companies entering the Chinese market. “Building relationship and signing successful agreements with Chinese companies often takes longer than foreseen,” she says. “Small and medium-size companies must be careful in planning their entrance in the market.”

Eric Huet, a managing partner at Ventech, a Paris-based global venture capital fund investing in tech-driven early-stage companies (with a strong focus on Europe and China), agrees. “Western companies want to enter this huge market that to them represents a mountain of gold,” he says. “But they often fail because they enter the market with wrong assumptions.” There is a lot of misunderstanding from people in the West about what China is able to do, he says. “Lots of people still see China as a copycat and a manufacturer of fake products and they think they are much better than the Chinese.

If you address China like this you are making a big mistake because in some areas Chinese companies are the best in the world.” Huet says he considers Alibaba, China’s leading e-commerce provider, to be better than Amazon and rates the Chinese search engine Baidu higher than Google. “China has some of the best technology platforms in the world. Look at WeChat, which is incredibly sophisticated and everybody in China is using it today. If European or Western companies think they can break into the market by being better they are totally wrong.”

Another obstacle is that China has historically been protected by the government and government regulation, which favor local players, says Huet. A third difficulty is that market competition is brutal and if you are a foreigner it is essential to have a Chinese team if you expect to make any headway, says Huet. Language and cultural differences make that hard.

Still, there is reason for optimism when it comes to dealings between European and Chinese tech companies, he says. While in the past Chinese tech entrepreneurs were almost exclusively focused on their massive home market and did not care about the rest of the world, that is starting to change. “Nowadays Chinese companies are more willing to address foreign markets and they realize as well that they don’t always need to reinvent the wheel and can pick up [technologies] they need in Europe or the U.S,” he says.