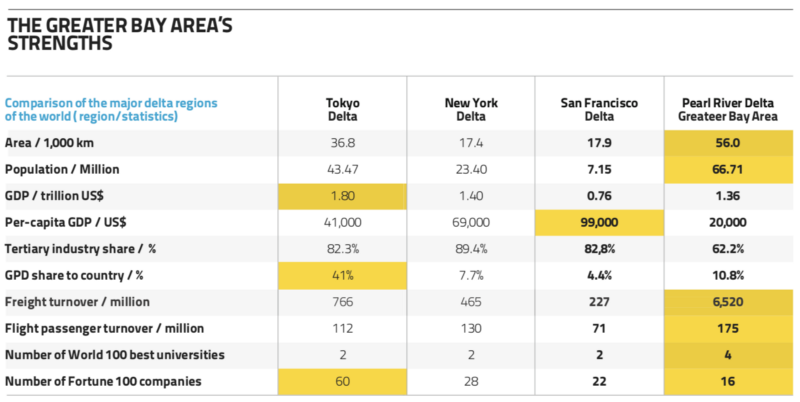 — There are regional plans to position Hong Kong and the Greater Bay Area as the future platform for the innovation and technology needs of the Belt and Road Initiative.

Guangzhou Pearl River Piano Group,which bills itself as the world’s largest manufacturer of pianos, is moving production to a much bigger facility and turning its old factory into a billion-dollar innovation hub and incubator for everything from tech startups to music producers, filmmakers and gaming and fashion designers. When finished, the old factory, which sits at the crossroads between the cities of Guangzhou and Foshan, will include a music recording studio, a film studio, a theater and a copyright trading platform for original creations, among other things — a reflection of the company’s move into digital and other new businesses.

The piano company’s ambitious plans are in tune with its location, an area known as Greater Bay. The Greater Bay Area (GBA) is made up of 11 cities in southern central China, with a total population of about 68 million: Guangzhou, Foshan, Shenzhen, Zhouhai, Huizhou, Dongguan, Zhongshan, Jiangmen and Zhaoqing, plus two administrative regions: Hong Kong and Macao.

Individually the cities have major strengths: Shenzhen is home to four of China’s powerful tech companies: Huawei, which overtook Apple to become the world’s second-biggest smartphone seller in the June quarter; Tencent, a leader in social media and gaming now branching out into new areas such as health-related image technology; Ping An, an insurance company that has become a tech titan; and DJI, the world’s biggest manufacturer of civilian and commercial drones. Guangzhou has a huge manufacturing base. Hong Kong is a leading global free port and financial hub and Macau, a global gambling and entertainment destination, is known as the Las Vegas of Asia. Collectively the Greater Bay is an increasingly important global economic powerhouse. In addition to manufacturing and tourism industries, the Greater Bay area leads the nation in insurance, finance, technology, real estate development, and automotive and home appliance manufacturing, according to a report by the global consultancy PwC. By 2030 the GDP of the region is expected to amount to at least 30.4 trillion renminbi ($4.62 trillion), surpassing the economic size of the Tokyo Bay Area ($3.24 trillion) and the New York Bay Area ($2.18 trillion), according to estimates by the think tank China Centre For International Exchange.

Reinforcing the Belt and Road Initiative

During the GBA’s annual meeting, which took place earlier this month, the Guangdong party chief Li Xi said that as of last year, the total GDP of the pan-Pearl River Delta region was already nearly 30 trillion yuan ($4.4 trillion), or about a third of China’s total gross domestic product, according to press reports.

That’s not all. The integration of Greater Bay’s cities is expected to reinforce Belt and Road, China’s transcontinental trade and infrastructure investment initiative.“Hong Kong is positioned to be the Belt and Road Initiative hub for capital markets activity, transport and logistics expertise and professional services talent,”notes a KPMG report.“As a leading city within the Greater Bay Area there are regional plans to position Hong Kong and the GBA as the future platform for Belt and Road Initiative innovation and technology solutions.” Plans to expand the GBA’s positioning as a regional technology hub include an agreement between Hong Kong and Shenzhen to develop the Lok Ma Chau Loop into one of the world’s largest innovation and technology parks on the border of the two cities.

“For countries and companies participating in the Belt Road Initiative, leveraging innovation and technology in the GBA will support the acceleration of their economic growth and development,” says the KPMG report. Businesses overwhelmingly support China’s Greater Bay Area initiative, according to a 2017 YouGov survey of 614 businesses located in GBA cities commissioned jointly by KPMG and the Hong Kong General Chamber of Commerce. Respondents highlighted improved corporate synergies, a freer flow of talent and enhanced abilities to penetrate markets as the leading benefits to arise from the initiative.

To create greater cohesion GBA’s cities are becoming more connected in multiple ways. A new 55-kilometer, $20 billion Hong Kong-Zhuhai-Macau Bridge, the world’s longest sea-crossing bridge, is expected to slash journey times between the three cities from three hours to 30 minutes, putting them all within an hour’s commute of each other. And the Hong Kong stretch of the Guangzhou-Shenzhen-Hong Kong Express Rail Link will open on September 23. And, in March, the Tencent CEO and founder Pony Ma proposed an electronic identification scheme for residents in the Greater Bay Area to facilitate mobile payments. The service would allow Hong Kong and Macau residents to link their mainland travel permits to a mobile phone to enable mobile payments, according to press reports.

The company is working with the Chinese authorities to develop an “E-card” system, which would allow residents in the region to use WeChat, Tencent’s social media app, as a travel permit at border crossings between the mainland and Hong Kong or Macau. The E-card could also be used as identification to set up bank accounts or check into hotels, Tencent said in June. There are, however, challenges to be overcome in order for the GBA to fulfill its ambitions, according to the YouGov survey. Those surveyed identified protectionism and other measures that hinder cooperation as the biggest hurdles to the area’s development, followed closely by silos between and within GBA governments.

While the Greater Bay Area has four different official languages, many different cultures and different legal systems, “it is not just an idea on a piece of paper — it has been an organic reality for years and is real whether legislation is there or not,” says Tony Á. Verb, a Hungarian serial entrepreneur turned venture capitalist who has lived in the area for seven years. He plans to launch a bridge fund between Europe and Asia called GreaterBay Ventures. “The growth in this region, the economic diversity in this region, is simply unparalleled,” says Verb, explaining why he decided to launch a fund based in the GBA. “It has been growing at 10% annually for like 30 years and is expected to keep on growing at that pace for another 20 to 30 years. In an environment like this where you have all the resources in the world — there is capital, e-commerce, logistics and three of the top 10 global ports plus an incredible entrepreneurial hunger and spirit — there is nothing that cannot be done here.”