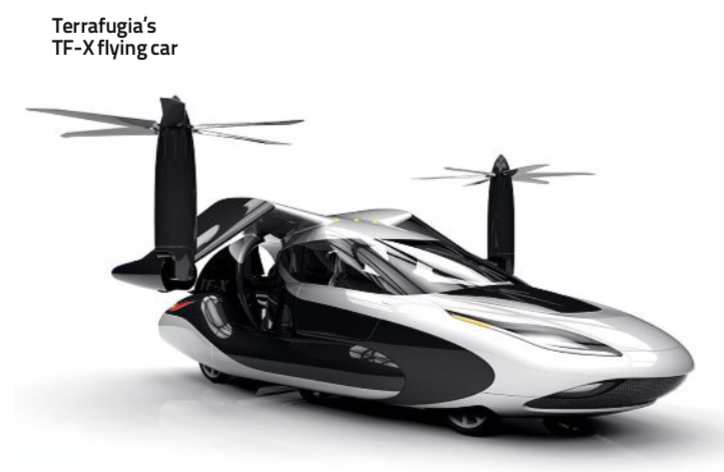 Urban mobility is expected to become more fluid thanks to flying taxis, autonomous cars and new types of car-sharing services.

It looks like flying cars may finally be getting off the ground. No longer the stuff of science fiction, vertical take-off and landing aircraft (VTOLs) — the technical name for flying cars — are being developed by the likes of the aerospace giant Airbus and the global ride-sharing service Uber as well as by VC-backed startups like Germany’s Lilium.

Geely, the Chinese automotive company behind Volvo, has just acquired an American VTOL company called Terrafugia, and earlier this year the German carmaker Daimler invested in Volocopter, a German VTOL startup that is developing a battery-powered aircraft.There are VTOLs that look like futuristic versions of jets or helicopters. Others resemble the type of aircraft featured in 1960s cartoons. Some are electric, others are battery- powered. And some even operate both on land and in the sky. All are being designed to be autonomous and offer ride-sharing services that can be booked by a smartphone, on the fly.

VTOL technology is made for taking off, hovering and landing vertically in places where there are no runways, such as city centers. The objective is to make urban travel more fluid. If the roads are jammed you simply take to the skies. In the past, services like on-demand urban helicopters were only available to the rich. That is no longer the case. Uber, which says it will begin offering flying taxi services as early as 2020, says its in-the-air taxi service will be priced the same as Uber X.

So what will it take to make VTOLs fly? In November, Uber Chief Product Officer Jeff Holden announced that the company has signed a deal with NASA to help develop traffic systems for its autonomous flying cars, which it hopes to start testing within two years in Los Angeles, Dallas-Fort Worth and Dubai. Uber needs NASA’s help to create an air-traffic control system that could allow liftoffs from numerous building rooftops without hindering commercial aviation or endangering the public.

Finding suitable real estate for the launch pads and building a reasonable system for automating the check-in process must still be worked out.

No One Behind the Wheel

Regulatory issues must also be resolved before autonomous cars take over city streets, but tech companies are already pushing the boundaries. Waymo — a company spun out of Google’s self-driving project — is already testing autonomous vehicles in Phoenix, Arizona, without human safety drivers at the wheel. Waymo’s CEO, Jeff Krafcik, said his company’s employees are already hailing driverless minivans in and around Phoenix through a mobile app. Within months Krafcik says Waymo vans with no safety driver will also pick up Phoenix residents registered in its Early Riders program, with an eye towards launching a paid hailing service sometime during 2018. Waymo is moving quickly to develop the technology and lock in its early-mover status, as self-driving car programs of other companies eye the same goal of getting fully autonomous vehicles on the road. However, this doesn’t mean that the technology will be adopted rapidly, notes the research firm CB Insights. Waymo is operating cars in Phoenix at a level 4 of autonomy, meaning they can drive without a human in most — but not all — circumstances. The goal of Waymo and its rivals, including traditional car companies, is to reach level 5, meaning the self-driving system is so advanced that a vehicle would be capable of going anywhere that a human can under all conditions. The business models behind autonomous cars vary. Companies like Waymo and Uber plan to operate fleets of self-driving taxis. So does the UK-based FiveAI. Some car manufacturers, including GM, BMW and Volkswagen, are hedging their bets, pursuing both direct sales and fleet operation. While Waymo hopes to have a commercial autonomous fleet service on the road by 2018 some analysts are skeptical.

“We believe that widespread availability of level 5 cars could be at least 15 years away,” CB Insights said in a research note. “It will take a level of trust in the technology to alter transport behaviors. It’s a matter of legislation, regulation, safety and consumer acceptance all lining up. This will be a big shift. Governments need to spend the next couple of years preparing the proper legislation, says Lucy Yu, who handles public policy for FiveAI, which is also developing autonomous driving software. It is working with Transport of London to test self-driving services in London by the end of 2019. For safety’s sake there need to be global standards for how autonomous cars should behave under certain circumstances, says Yu. And cities need to prepare for a very different future. While the timeframe for the uptake of autonomous vehicles and aircraft remains uncertain, the introduction of autonomous cars and VTOLs are expected to change city centers. If pundits are right, few, if any, people will own their own cars, there will be fewer cars on the road and they will operate more efficiently, meaning cities will be greener, at least in principal. It is important that cities think about this early on and envision what they want to do with unneeded parking lots and extra space, says Yu. “Otherwise the great promise and potential being sold to the public won’t be met.”

Yu says she sees autonomous vehicles as a complement to existing public services. But it is yet unclear how private and public transport services will work together to create the truly seamless types of mobility-as-a- service offerings that are envisioned.

A Question of Control

The promise is that we will soon be able to smoothly move from our desired destination to anywhere we want to go in a city, whether it be by ride- hailing a VTOL or car-sharing service, bicycle, scooter, bus, train, metro, or a combination of any of these services.

But to work well, mobility-as-a-service will demand significantly more cooperation between companies and industries as well as a new digital infrastructure layer. The question is whether that future will be centralized and controlled by one or more big commercial players — such as a car company building a closed ecosystem or a Silicon Valley player like Google — or whether an open system will take root. “Everybody wants to have an exclusive platform,” says Yu. “Cities have a lot of influence, so one of the things cities can do is develop licensing requirements that spell out what operators of private services must do for cities in return for a license.” Until such details are worked out, new forms of autonomous transportation like VTOLs might have trouble taking off.