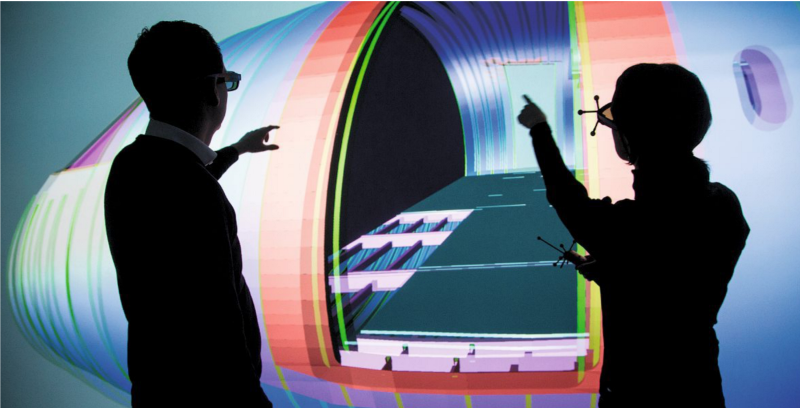 The aerospace company is investing money and resources in innovative technologies.

Earlier this year at the Geneva Motor Show, the global aerospace company Airbus revealed the Pop.Up, a conceptual autonomous two-passenger pod that would clip to a set of wheels when traveling on roadways, to a quadrocopter when it is more convenient to travel by air, to other vehicles to create a train and — as if these options are not enough — could even zip through a hyperloop tunnel.

While it is likely to be some time before such a project is realized, Airbus is already reinventing itself in multiple ways. It has launched several urban air mobility projects, including Vahana, a single-passenger, self-piloted electric vertical take-off and landing aircraft. It is focusing on the development of electric and hybrid-electric propulsion, as the company says it believes it is one of the most promising technologies in the future of flight. It is developing products for digital factories which will make greater use of augmented reality technology and automation. It is looking at ways of harnessing and analyzing the wealth of data generated by its aircraft and imaging satellites, to deliver new types of information and services to customers. And it is exploring new business models that use digital technologies to increase agility and performance.

Some of the moonshot projects — such as Vahana — are handled by A3, the advanced projects and partnerships outpost in Silicon Valley.

“But we also need short-term innovation and by that I mean innovation that is able to be realized within one to three years, which is short term in our industry,” says Bruno Gutierres, head of BizLab, Airbus’s startup accelerator program which was launched in 2015. “Most of the time we are looking for projects that could enrich or seed the long-term strategy but in a short time frame. We will not manage the overall autonomous vehicle project, for example, but we will manage feeders to the global projects.”

Just because their projects are short term doesn’t mean Bizlab startups are not disruptive. “They are definitely disruptive,” he says. “They help us create additional value for our platforms.” For example one of Bizlab’s companies, bizpay, allows consumers to buy airline tickets in installments. The company is offering a different business model for airlines, giving the opportunity for the consumer to buy tickets and split the payment like a loan. Like other big companies, Airbus needs to both encourage internal innovation and bring in innovation from the outside, and figure out how to balance the two.

“Some of the benchmarking I did on companies that decide to create accelerators made me realize how difficult it is,” he says. “After you accelerate (startups) how do you impact your core business? How will this startup be accepted by your internal innovation people? The concern a big company has is that by working with startups the message that is conveyed is ‘we are not good enough’ so the risk is that there will be internal opposition, which immediately creates an obstacle to the integration of the startup within the core business.” To get around that problem Airbus has come up with a hybrid concept. Bizlab includes both startups and “intrapreneurs” who work at the aerospace giant.

“By doing that you have a permanent bridge between internal innovation and external innovation,” says Gutierres. “There is no rejection because Bizlab is part of internal operations as well. There is a natural flow of internal people who are coming to the Bizlab, living with the startups, and becoming part of the community.” The accelerator program operates in Toulouse, France; Hamburg, Germany; and Bengaluru, India. It offers one six-month program per year so now it is just starting season three.

Each batch is limited to between five and seven startups at each location, or between 18 and 21 maximum. “We really want to provide them with a high level of support — it is very important. This is maybe one of the rea- sons we have such a good record,” says Gutierres. “After two seasons involving a total of 33 startups we have 14 deep collaborations.” Internal projects being worked on at Bizlab are also proving successful. Gutierres points to one called Aircam, which uses a drone equipped with an automatic navigation system to provide aircraft inspections. Data acquisition only takes around 10 minutes by drone, instead of two hours with conventional methods, and all the images are compiled in a 3D digital model, improving traceability.

What’s more, several internal projects are close to spin-out — at least three of them will be coming on the market in the weeks and months to come, Gutierres says. He says he believes mixing intrapreneurs and extrapreneurs is a key part of Bizlab’s success to date. “We have been lucky with the star- tups we have selected but I strongly believe this hybrid concept is a big part of the success,” Gutierres says. “While I am happy to share this experience with other companies they should not take this as a recipe or a miracle approach. They have to find the best approach for their own markets.”