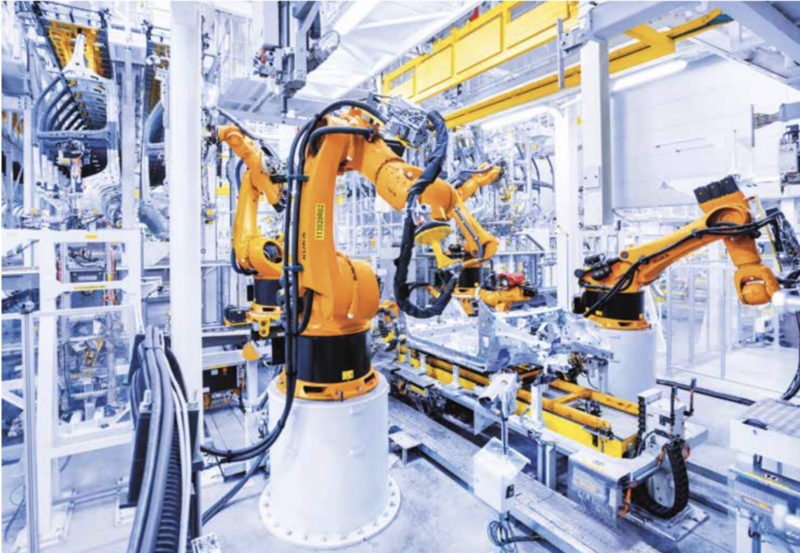 The rollout of 5G networks, coupled with increasingly powerful sensors, and artificial intelligence, is projected to transform factories into powerful, data-driven operations that are far more flexible and efficient. If done right, it is expected to have a huge impact on economic growth.

But Europe is missing some of the key building blocks and it could take a decade or more for it to build the expertise, say industry observers. Taiwanese company TSMC makes 50% of the chips in the world and South Korea has the monopoly on the memory side with companies like 3D NAND and DRAM. Six other Asian equipment manufacturers — Foxconn, Quanta, Compal, Pegatron, Winstron and Invenec — control crucial parts of the supply chain.

“Europe needs to ensure that it has the key technologies underlying manufacturing and supply chain management,” Haisong Tang, a Shanghai-based serial entrepreneur and investor, said in an interview with The Innovator earlier this year. “This requires long-term thinking. Only the governments can do that. This is a big challenge for Europe.”

Other regions are racing ahead: China’s “Made in China 2025” initiative includes a $3 billion Advanced Manufacturing Fund. The U.S., which saw 18 million manufacturing jobs evaporate in the first decade of this century, announced sweeping initiatives to revive the sector, including an Advanced Manufacturing Partnership to bring together industry, academia and entrepreneurs to do fundamental research on advanced materials, advanced sensors for manufacturing, and digital manufacturing. The U.S. has also launched a network of public-private partnerships such as the MIT-led Advanced Functional Fabrics of America Institute and the National Additive Manufacturing Innovation Institute.

Europe has its own strengths and programs but fragmentation of efforts remains the EU’s Achilles heel, says Ricarda Wagner, Advisor on Digital Transformation for BVDW, the German Association for the Digital Economy.

“To say Europe is falling behind belongs to a ‘black-and-white-ideology’ that I don’t agree with, as it’s not as simple as that,” Wagner says. “European countries still are at the heart of manufacturing and excel in many of the R&D-relevant fields. Nevertheless, it would be arrogant to underestimate foreign developments in technologies for factories and supply chains — especially as those are well funded and don’t have to struggle to find common strategies with 27 partners.”

Filip Geerts, Director General of the European Committee for Co-operation of the Machine Tool Industries (CECIMO), says Europe manufacturing can claim leadership in a number of areas. He points to development of industrial B2B platforms that are supporting greater use of automation such as Axoom by Trumpf, Mindsphere by Siemens, Bosch Rexroth IoT Gateaway, Field System by Fanuc, and Adamos by DMG MORI.

More than a decade ago, the European Commission created an association called MANUFUTURE to encourage innovation around manufacturing in Europe. Late last year, that group updated its goals in a document called “ManuFUTURE Vision 2030.” In the document, the group calls on industries and governments to redouble their efforts in terms of researching and deploying innovative technologies.

Among other things, the report calls for more cooperation between academia and industry, more investment in fundamental research around key technologies, the reduction of barriers to transferring intellectual property from labs to businesses, and more funding for entrepreneurs.

“The manufacturing sector is of vital importance for Europe to foster economic growth and job creation and has a pivotal role to play in prompting investment and innovation, in particular as a vehicle for the introduction of radical innovations,” Heinrich Flegel Chairman of the ManuFUTURE High-Level Group, wrote in the report’s introduction.

1,000 Startups And A Billion Euros In Funding

Last summer, the European Institute of Innovation & Technology (EIT), an independent body of the European Union set up in 2008 to boost innovation and entrepreneurship, announced it was creating a new EIT Manufacturing project. By 2030, the new association wants to support 1,000 startups using a €325 million EIT venture fund, train 50,000 people in the skills needed for digitized factories, open six innovation hubs around Europe, and bring together university researchers and industry.

And the EU is backing its own Factory of the Future initiative with more than €1 billion. The money will go toward funding projects based around key emerging technologies.

As part of these initiatives, the EU has funded 14 projects that scale nano-based technologies developed in laboratories and apply them to industrial production applications. Super strong, small and lightweight nanomaterials may help create new medicines and healthcare tools, reduce pollution, and create new modes of transport. Beyond societal benefits, the economic opportunity is potentially enormous.

In one such program, the EU provided €6.3 million to a NanoPilot program coordinated by research agency CIDETEC in San Sebastián, Spain. After four years, the team has refined the process for manufacturing nano-pharmaceuticals which can be absorbed faster and target specific parts of the body more precisely.

Such breakthroughs are a good example of how innovation in the underlying manufacturing technology is needed to enable revolutionary products, says Alexandre Affre, Director for Industrial Affairs for industry association Business Europe.

“We have to create the right conditions for increasing investment in Europe for developing these technologies,” Affre says. . “And then we need these technologies to be deployed in hundreds of industrial processes in Europe if want to be competitive.”