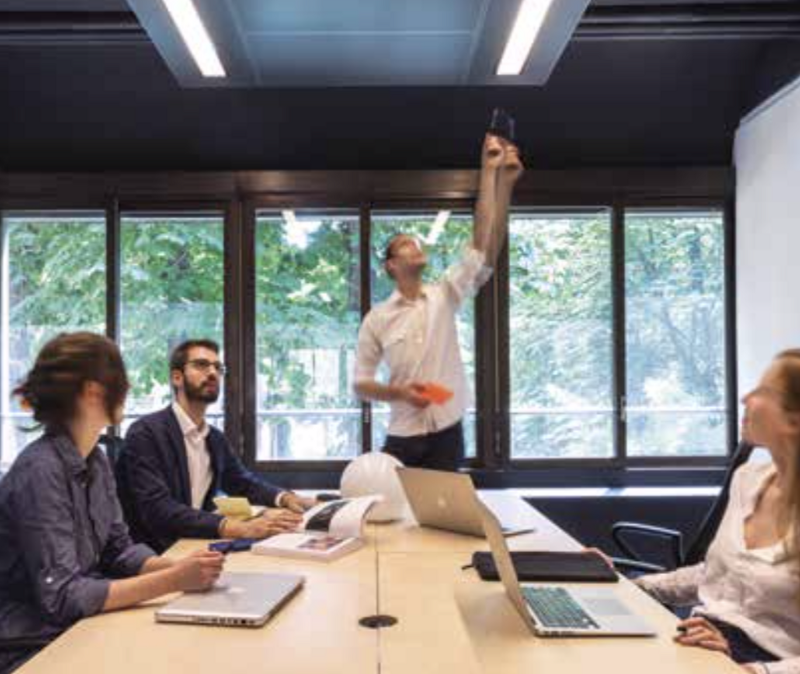 Intelligent connectivity is transforming every corner of the office as property owners and companies embrace benefits ranging from energy savings to more attractive work environments. Thanks to technologies such as the Internet of Things, cloud computing and artificial intelligence, almost everything inside a building can be connected.

“Data is the new currency, and [office buildings] need to be a lot more data driven,” says Akshay Thakur, regional director of the smart buildings program at JLL, a commercial real estate and investment management firm. New technologies don’t just add efficiency. “People are realizing that experience is everything. It’s all very good to run a well-oiled machine, but you have to make sure people want to come and work in the environment.”

JLL, a giant in real estate and property investment manage services, with 300 corporate offices in 80 countries, and 86,000 employees, has rejigged its own business in order to help clients reap the full benefits of connected offices. Rather than being a real estate firm that values technology, the company now considers itself a technology firm that targets the commercial real estate market. It is investing in developing digital products, and has hired tech-savvy executives like Thakur, a former Cisco Systems executive. It also co-founded a venture capital firm, JLL Sparks, which has a $100 million fund to invest in a range of so-called “proptech” startups.

“We want technology to be the core of our business,” Thakur says.

The pivot has made JLL a go-to name for companies looking to reinvent their workspaces. JLL was hired, for example, to help McDonald’s with its concept for a new headquarters in Chicago. Built in Chicago’s West Loop neighborhood, the 500,000 square feet building covers a city block, but consolidates employees who were previously scattered across four buildings spread out over two miles.

In the new headquarters, about 95% of the workspace is not assigned to anyone but is divided into sections for different departments called “neighborhoods.” Employees use an app built by JLL to connect and collaborate. An indoor mobility positioning system uses sensors to measure how spaces are being used. Employees can also use the app to adjust temperature and airflow, view floor plans, book conference rooms, and even navigate their way through the building.

In a survey conducted four months after the building opened McDonald’s reported that 83% of employees surveyed said the environment encouraged more collaboration, 70% felt more connected to their teams, and 86% felt proud to show the building to friends and clients. The company also said the space had become a powerful recruiting tool. “It really shows how buildings can evolve and how design can be far friendlier to people,” Thakur says.

While McDonald’s new HQ is a new space, older buildings are also being reinvented.

In Turin, Italy, international design and innovation firm Carlo Ratti Associati transformed the Agnelli Foundation’s landmark 20th-century building into what it terms “Office 3.0.” The renovated 32,000 square foot space — which was once Fiat founder Giovanni Agnelli’s villa, is packed with sensors that monitor occupants’ movements, temperature, CO2 levels, and space usage. Employees can set their personal preferences for things like temperature so that as they move about the building the sensors follow them and can adjust heating and cooling to create a kind of personal “environmental bubble.” To make the work environment more human-centric the building is surrounded by an orchard and green areas designed by Louis Benech — the French landscape architect who reshaped the Tuileries gardens in Paris and the Water Theatre Grove at the Palace of Versailles — offering occupants the chance to work outdoors, in close contact with nature.

“As work has become increasingly digital, why should we bother to go into the office,” asks Carlo Ratti, director of the Senseable City Lab at the Massachusetts Institute of Technology (MIT) and founder of Carlo Ratti Associati, in a statement about the project. “The key answer to that question lies in human interaction. The central idea behind the Agnelli Foundation project is that by seamlessly integrating digital technologies within the physical space, we can forge better relationships between people and the building they inhabit, ultimately fostering interaction and creativity.”

The Agnelli renovation was done in collaboration with Siemens, one example of how tech giants are entering this space. Cisco Systems, for instance, has developed its own smart building platform that uses IoT to optimize lighting, building automation, and property management. Some of these capabilities can be unlocked simply by connecting infrastructure such as heating and cooling that have not been digitized previously.

French utility Engie has invested in IoT network provider Sigfox, in part because of the technology’s potential to drive smart buildings and better monitor energy use. Engie notes that in France alone buildings use 45% of all energy, and reducing that is critical toward achieving environmental milestones. Engie is developing Novaldi, a broader platform to monitor energy usage in buildings. But the company also believes more buildings can be energy producers. To that end Engie is investing in blockchain projects that it hopes one day will allow buildings to directly sell excess power. (See the story on page x.)

The push toward smart buildings is expected to accelerate in coming years as carriers roll out 5G — fifth generation wireless broadband — mobile networks and companies embrace “edge computing” which is designed to place more cloud-computing power closer to users and applications. This, in turn, is also expected to spur an even wider range of smart building applications, such as augmented and virtual reality tools, robotics, biometrics like facial recognition for security, and virtual assistants. Smartboards, smart conference rooms, virtual meeting walls, all have the potential to make on-site collaboration more fluid and make it easier to connect to remote colleagues.

That said, smart buildings pose plenty of challenges, many of them cultural and organizational. For traditional tech purchases, decisions and plans are typically made by an IT department but designing a smart building requires participation from nearly every department, and the need to think not just about the technologies, but the very nature of the organization, its values and goals. “That’s what we tell clients,” Thakur says. “The building should very much be focused on outcomes and experiences, rather than someone saying, ‘I want this technology.’”

The swell of interest in smart buildings has naturally attracted entrepreneurs and investors. Memoori, a smart building research firm, reports that 2018 was a record year for investment in the global smart buildings sector, with over $2.4 billion invested in startups developing solutions in areas such as building IoT, energy, indoor mapping, and workplace management.

Among them is View, a San-Francisco-based startup, that makes connected windows that use a dynamic glass to adjust natural light, with the aim of saving energy and improving the mental and physical health of people inside the building. Last November, the company raised $1.1 billion from Japan’s SoftBank Vision fund.

New York-based startup Knotel is developing what it calls an agile headquarters platform. Rather than relying on long-term leases, the company designs and builds custom spaces that afford tenants flexibility. The company uses a combination of technology, data, processes and customer service to achieve those goals, says Sanjiv Sanghavi, head of product for Knotel.

The company has raised $160 million in venture capital over three rounds since 2017 and designed over 2 million square feet of office space. It’s also recently acquired Ahoy!Berlin, a workspace operator, and Deskeo, a leading office space rental company in Paris, as part of its expansion into Europe.

“We have tremendous data about how space is utilized and which design patterns work for which types of companies,” says Sanghavi. Knotel uses this data and technology to help make algorithm-driven decisions about the office layout. “Collecting data is simple,” he says, “the challenge is knowing how to interpret and utilize it.”

WHAT IT DOES: Provides an AI-powered sensor-as-a-service platform that helps companies understand how their workplaces are being used.

WHAT IT DOES: A suite of products that focus on using mobile apps, IoT, and data analytics to create an innovative environment in workplaces.

WHAT IT DOES: Enables storage of energy generated by assets such as solar panels so office buildings can use power generated locally at later times.
https://www.stem.com

WHAT IT DOES: Provides a centralized view and single dashboard of all aspects of a building’s functioning equipment.

WHAT IT DOES: Uses AI and machine learning to guide commercial real estate investments.

WHAT IT DOES: A cloud-based service for property owners that centralizes information on project progress and spending.