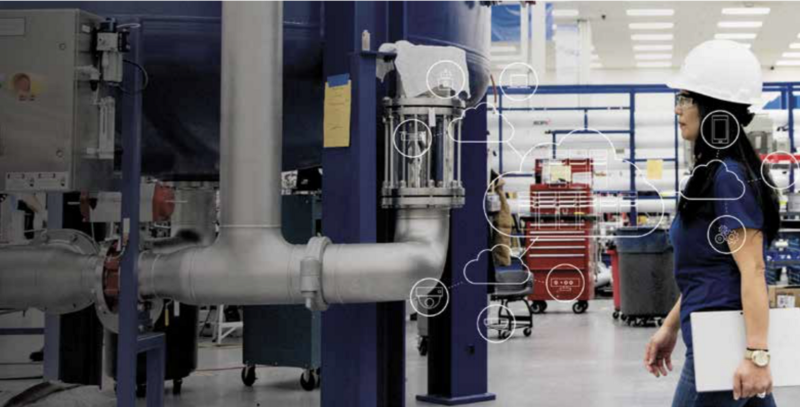 The accelerating rollout of lightning-fast 5G networks by carriers around the world may be getting all the buzz but a concept known as “edge computing” could hold the key to the success of high-speed intelligent connectivity.

Edge computing refers to the notion that gathering and processing data happens at the source of an application or device, or at least close to it. That’s a different architecture than today’s cloud-based world, where information is hoovered up and then sent to a distant data center to be crunched and spit back out.

Even if 5G networks, short for fifth generational wireless broadband technology, are 10 or more times faster than current 4G wireless networks, sending data across great distance creates what is known in industry parlance as latency — delays in data communication over a network.. That’s a problem as 5G is positioned as a way of enabling real-time, mission-critical applications such as autonomous vehicles, smart grids, industrial automation, remote surgeries and the management of drones.

Without more robust edge computing, the fear is that the promise of this potentially transformative age of high-speed wireless networks will go unrealized. And so the industry is investing billions to redesign the Internet’s cloud-based architecture, which relies on centralized data centers to handle the coming tsunami of data.

“We’re generating too much data,” says Asha Keddy, Intel’s Vice President of Next Generation and Standards. The amount of data generated annually is projected to increase from 40 zettabytes this year to 175 zettabytes in 2022, according to a report by analyst firm IDC. To put that in perspective, one zettabyte is a trillion gigabytes, making 175 zettabytes the equivalent of about 5.4 billion years of YouTube videos.

Data production is soaring due to the growing connectivity of Internet of Things ( IoT) devices, which number about 26 billion now and are expected to grow to 75 billion by 2025. Connected devices include such things as drones, automobiles, robots, wearables and smart home gadgets. Each sensor-equipped endpoint churns out more and more data that is rendered more useful thanks to the speed of 4G networks and the development of machine learning and artificial intelligence to more effectively process it. With the arrival of 5G, which can also handle a far greater density of simultaneous connections than 4G, the data production and demands will expand exponentially.

“If you keep putting everything back to the cloud, nothing would ever work,” says Keddy. “ You don’t have enough time ….for it to go all the way to the core. “ Fear of bottlenecks has motivated the tech industry to unleash a massive infrastructure campaign running in parallel to the 5G rollout to ensure that a lot of computing will get closer to where it is being used.

According to market research firm IDC, the edge computing market, which barely existed a couple of years ago, will be worth $34 billion by 2023. This includes the hardware, software and components need to create a vast number of processing systems that compliment the larger data centers located far away. These edge computing systems must be able to filter out data, deciding what to keep locally and what to send up into the cloud, and analyze information in milliseconds to deliver the promise of true, real-time automation.

Fortunately, a number of technologies are converging that will enable this transition from centralized data centers to distributed networks comprised of smaller, more specialized centers at the edge that rely on lower-power servers. Of course, 5G is one of those elements. Artificial intelligence (AI) is another, along with new methods of writing applications, and improved hardware that allows some of the most critical functions to be placed on a single processor.

This shift is expected to have a profound impact on companies that have thrived in the cloud computing era, and so they are now scrambling to prepare for yet another computing disruption. Chipmakers Intel and ARM, for example, have introduced their own line of edge computing chips. And last year Microsoft introduced a version of its cloud platform called Azure Sphere, which was designed specifically to process information closer to customers.

“Enabling intelligent cloud and intelligent edge solutions requires a new class of distributed, connected applications and will ultimately deliver break-through business outcomes. At the edge, the application is contextually aware and can run in both connected and disconnected states, ” Julia White, Corporate Vice President for Microsoft Azure, wrote in a blog post.

ARM, which introduced its own edge computing system called “ARM Neoverse,” believes it can use the lessons it learned from the mobile handset sector to become a leader in intelligent, connected devices, says Mohamed Awad, vice president of ARM’s Infrastructure Business. Already, customers are approaching the company, anxious to begin re-thinking their products and services to take advantage of the new connectivity and intelligence promised by 5G and edge computing, he says.

Arpit Joshipura, general manager of The Linux Foundation, says edge computing has transformative potential in areas such as smart cities, government, energy, logistics and healthcare even before 5G is fully deployed. But to get there, the industry has to broadly assure that this coming wave of smaller, distributed computing gadgets or edge computing centers can work seamlessly together. The Linux Foundation announced in January that it had created a new open-source project called LF Edge, which counted 60 of the biggest names in tech as initial members. LF Edge has five projects aimed at standardizing open-source software around various aspects of edge computing

What makes standing on the threshold of this next wave of networking technology exciting, ARM’s Awad says, is not really knowing just how people and businesses will leverage the convergence of AI, IoT, 5G and edge computing.

“The shift to 5G has the potential to have an oversized impact because of the freedom it allows developers,” he says. “This becomes about more than just innovating around your phone because that computing capability will spread to all these other IoT endpoints so this will certainly exceed where 4G has taken us in terms of overall impact on technology and economies. I think it would be disingenuous for anyone, myself included, to stand up and say, ‘Hey this [edge computing] is going to be the thing that is going to make it revolutionary.’ But I certainly believe we are embarking on a new era where we’ll look back in 10 years or maybe 15 years and just be completely blown away by how far we have come.”

WHAT IT DOES: Edge computing software that uses artificial intelligence to give businesses more insight about their data.

WHAT IT DOES: its AI-powered processor can be embedded in edge computing devices to deliver real-time analysis.

WHAT IT DOES: Building a nationwide network of edge computing centers designed to create geographical proximity for applications such as autonomous driving.