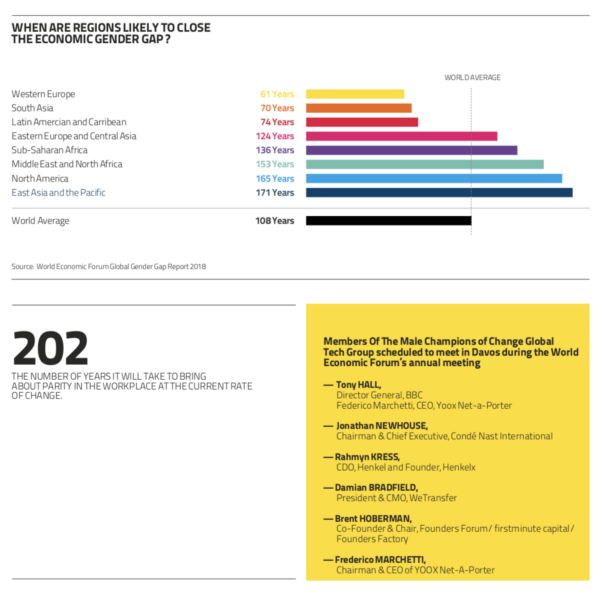 Of all funds raised by European VC-backed companies in 2018, some 93% went to all-male founding teams, according to the 2018 State of European Tech Survey conducted by European venture capital firm Atomico. It is part of a much larger problem. The World Economic Forum’s annual gender gap report shows that women are under-represented in all areas of the tech sector. At the current rate of change the data suggest that it will take 108 years to close the overall gender gap and 202 years to bring about parity in the workplace. Ensuring the full development and appropriate deployment of half of the world’s total talent pool has a vast bearing on the growth, competitiveness and future-readiness of economies and businesses worldwide. The Global Gender Gap Report benchmarks 149 countries on their progress towards gender parity across four thematic dimensions: Economic Participation and Opportunity, Educational Attainment, Health and Survival, and Political Empowerment

It is no surprise then that the gender gap and how to fix it will be a major topic at the Forum’s annual meeting in Davos, Switzerland January 22–25.

AI: A New Frontier In The Global Gender Gap

While the gender gap in science, technology, engineering and mathematics (STEM) is well chronicled, new analysis the Forum conducted in collaboration with LinkedIn points to a glaring gender gap that is developing among artificial intelligence (AI) professionals, where women represent only 22% of the AI workforce. France has a gender gap when it comes to AI professionals of 73%. AI skills are important as they are likely to have a big impact on almost every industry. The global gender gap in the AI workforce is three times larger than other industry talent pools. Unless efforts are made to get more women into AI professions, the workplace gender gap could increase further.

The analysis also suggests that in addition to being outnumbered three to one, women in AI are less likely to be positioned in senior roles or signal expertise in high-profile, emerging AI skills. The LinkedIn data suggest that women with AI skills are more likely to be employed as data analysts, researchers, information managers and teachers, whereas men are more likely to be employed as software engineers, heads of engineering, heads of IT and chief executives — more lucrative and senior positions.

Given the depth of the talent gender gap in AI, there is a clear need for proactive measures to prevent a deepening of the gender gap in other industries where AI skills are in increasing demand. These include traditionally male-dominated industries such as manufacturing, hardware and networking as well as software and IT services, as well as traditionally female sectors such as non-profits, healthcare and education.

“Industries must proactively hardwire gender parity in the future of work through effective training, reskilling and upskilling interventions and tangible job transition pathways, which will be key to narrowing these emerging gender gaps and reversing the trends we are seeing today,” Saadia Zahidi, Head of the Centre for the New Economy and Society and Member of the Managing Board, World Economic Forum, said in a statement. « It’s in their long-term interest because diverse businesses perform better.”

Male Leaders With The Power To Promote Change

A new group, called the Male Champions of Change Global Tech Group, which was established in May 2018, will meet for the first time in Davos. The scheduled participants, which are from media, advertising, fintech and heavy industry, reflecting the diversity of the tech sector (see the list), have pledged to work together on gender equality within their organizations and try and change systems that perpetuate and entrench inequality.

The group will formally endorse its charter — which outlines the guiding principles, mission and purpose of the group — _and agree to three priority action areas to drive global gender equality change in the technology industry. The formation of the group is an initiative of a joint venture between accelerateHER, a group that is addressing the under-representation of women in the technology industry through events, strategy and innovation and The Male Champions of Change Institute , which has an established track record of driving this change model within a number of male-dominated industries in Australia.