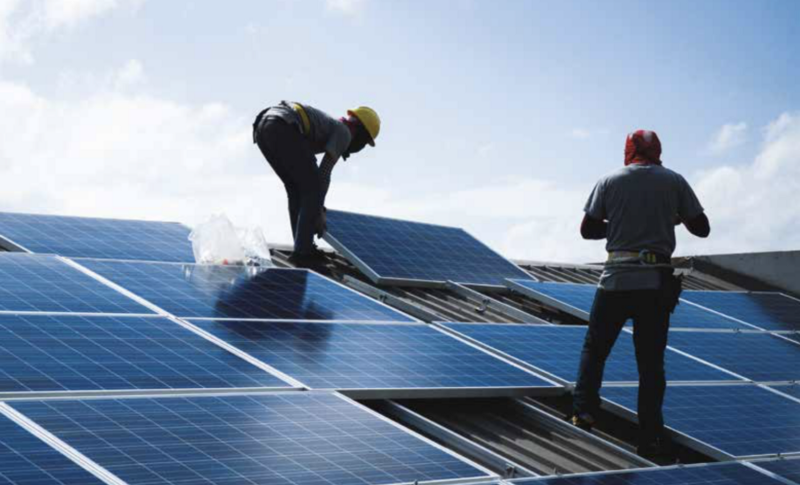 Like other energy companies, Sweden’s Vattenfall, one of Europe’s largest producers of electricity and heat, is grappling with smaller margins, increased competition and adapting an asset-heavy business to an increasingly data-centric, service-driven world.

“We saw how digitalization was changing other industries intensely and didn’t have a clue how it would effect energy markets in the future,” says Juliane Schulze, who heads up business development for renewable energy assets at the utility, which sells electricity, heat, gas and energy services to around 14 million customers in Sweden, Germany, Netherlands, Denmark and the U.K.

Eager to create new revenue streams, the utility set up a new firm from scratch in 2017 and enticed outsiders to run it. Today, that company, Berlin-based Solytic, is running a vendor-independent solar analytics platform with the aim of cutting the cost of operating photovoltaic panels for business customers such as maintenance companies servicing factories, small and medium sized businesses, and farms. The company’s technology — which includes artificial intelligence and Internet of Things hardware — replaces manual monitoring systems. It is able to tell businesses in real-time that one or more of its photovoltaic (PV) power plants is only operating at a fraction of full-capacity, that this is abnormal based on the data collected from similar installations, and make a recommendation.

Bloomberg New Energy Finance forecasts that installed solar capacity will increase 14-fold worldwide by 2040. This is expected to lead to a growing demand for tools that help optimize return on investment. Solytic’s own market research estimates that around 25% of all solar-PV installations are underperforming.

But that is just the start. The plan is to evolve the service to a multi-sector platform business model that will not only leverage the vast amounts of data it collects from solar installations but also add in other sectors, such as insurance and financial services.

“Solytic’s ability to aggregate millions of data points across hundreds of thousands of solar energy assets will ultimately not only make these assets more efficient for their owners but lay the groundwork for a decentralized, large-scale trading platform that our future digital energy economy needs,” says Michael Stephanblome, a co-founder of Factor10, an independent corporate company builder that helped Vattenfall build Solytic.

Moving From A 10X Factor On Margins To 100X Or More

Although Vattenfall’s wind and solar renewal energy businesses are relatively young, the division had already grown to over 500 people by 2016 — about 80% of them engineers — and had established structures and processes that made it difficult to be entrepreneurial and agile, says Schulze.

“We wanted to understand what the energy market looks like from the perspective of entrepreneurs, to know how they see the world through their digital glasses, to look at what we could learn from business models from totally different industries and how we could transform from being asset driven to being data driven,” she says.

To that end, Schulze started speaking to members of the Berlin startup community and eventually connected with Factor10, a member of the World Economic Forum’s Digital Platforms & Ecosystems working group, which focuses on how to best apply the platform business model to traditional industries. Factor10’s team is comprised of over 100 tech entrepreneurs and industry experts with a long track record in the European startup and digital ecosystem. It partners with big corporations and helps them create new digital ventures and adopt the powerful platform business models that the world’s largest Internet companies have used to grow exponentially. (Other clients include Adidas and Allianz.)

Brainstorming with Factor10 led to the idea of creating a solar monitoring and analytics product that has the potential to grow into a platform business. In July of 2017 Factor10 recruited Johannes Burgard, an engineer and project manager with five years experience working at Airbus and other companies. Initially hired as an entrepreneur-in-residence at Factor10, Burgard began creating a minimally viable product (MVP) with the tech team at Factor10 and Alwin Nagel, a Vattenfall employee who left the parent company to work on the project full-time. Solytic was established as a separate legal entity in the summer of 2017. The young company hit all of its milestones, leading Vattenfall to invest €3 million at the end of 2017. Solytic is run by Burgard, Nagel and Konrad Perényi, an entrepreneur with 11 years of experience working for digital ventures such as Rocket Internet. Shareholding is split among Vattenfall, Factor10 and the three founders.

“Changing a big company is like turning around a tanker,” says Burgard. “But we can be agile and move fast.”

In addition to an innovative company structure “Solytic has the ability to really leverage the data that they show to their customers,” says Schulze. “The data science layer is very under-developed in this industry. They have strong partnerships and a strong tech team in place that is able to analyze the root causes for failures. This is a completely new market segment in Europe.”

By automating and improving on today’s manual monitoring of industrial PV installations Solytic can, among other things, lower risks for banks and insurance companies, says Burgard. “The whole idea of providing knowledge and creating more transparency for every single party that is involved in the community is far more interesting,” he says. “By interlinking service providers with the owners of solar assets we can move from a 10X factor on margins to 100X or more. Tapping into this market will lead to exponential growth. That is where the magic happens.”

Vattenfall says it believes in that vision. “Once you have cracked the software-as-a-service analytics nut and you have a substantial customer base and you have enough data, you can start to provide a lot of interesting services to clients that are adjacent to the energy market,” says Schulze. “For example, grid operators need detailed data about fluctuations in renewable energy sources. This is very hard to predict. If you can develop data science for weather — as one example — and the analytics are developed well enough you can grab a substantial share of that market. Car-sharing companies may want to use time-sharing cars when prices are cheap because solar production is cheap. That could be a very nice service for this kind of customer group. And if you are able to provide information about the performance of assets to insurance companies or banks that help them judge their risks that could also be a valuable service. There is the possibility with this platform to create a whole ecosystem of services based on data.”