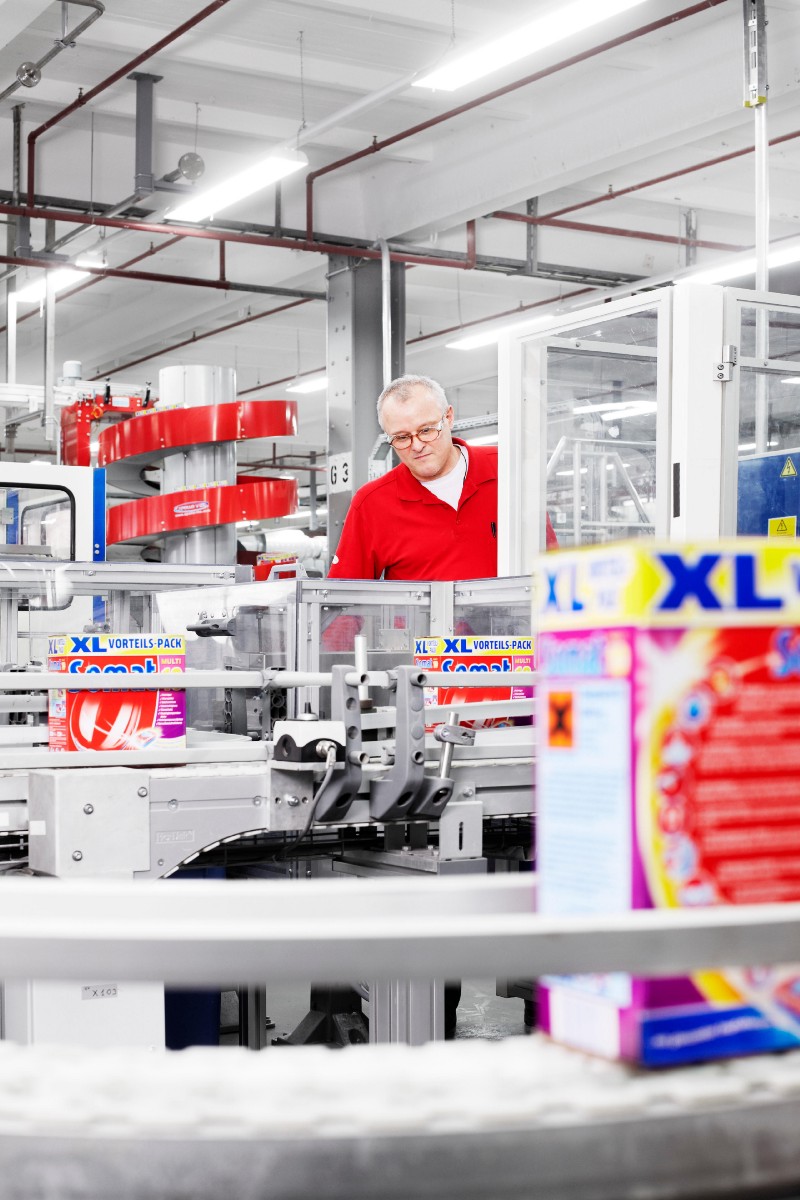 In 1876 Fritz Henkel founded the company Henkel & Cie in Aachen, Germany. The company’s first product was a laundry detergent based on sodium silicate called “Universal-Waschmittel” (universal detergent). Today Henkel’s detergents are used worldwide to do about 25 billion wash loads annually.

These products — a €6.6 billion business — are produced in 31 factories around the world that are filled with legacy equipment.

So what is the cleanest way to digitize all of these plants? “We have deployed already on a global scale but we don’t have one single lighthouse factory,” says Dirk Holbach, Senior Vice President of Laundry & Home Care and managing director of Henkel’s global supply chain. “Our approach is broader. When we find something interesting we pilot it in two, three or four sites and if it works then we scale-up fast globally.”

The approach is structured around a “4+1” strategy that Holbach believes can help the company’s supply chain become “faster, better and cheaper”: Analytics, robotics/automation, sensors and visualization plus end-to-end connectivity. “We are trying a lot of things,” says Holbach. “The speed of change is so fast we can’t always bet on the right horse. We have to fail also and not get lost in all the opportunities, so we are going with a portfolio approach. This portfolio of applications is constantly being reviewed and adjusted over time.”

The digitization process began in 2013 when the company started systematically connecting all of its sites. The digital backbone extracts data about the production process worldwide, giving the company insights that it uses to build applications.

The unit is using machine learning to improve processes continuously. And, legacy controller equipment is being upgraded so that factory printers can produce serialized codes, using an app that tells the company where a product is produced, which line, which warehouse and for what customers. “At the moment eight printers in our European factories are testing this and we plan to roll it out to more than 200 production lines by the end of 2020,” says Holbach.

The company is experimenting with 3D printing in the production of its home care products and with augmented reality (AR). AR is being tested in factories in Spain and North America for changing products on production lines and maintenance. Using AR headsets to digitize paper-based instructions is expected to reduce defect rates, decrease training times and increase yield. But “digitizing all of these different steps in the system takes a lot of effort, money and resources for rather incremental benefits,” says Holbach. “At the moment it is not yet at the very top of our list.”

Some 1,600 people working in Laundry & Home Care are using cloud-based, end-to-end analytics to visualize the supply chain. Machine learning algorithms are being used to improve demand forecasting capabilities. The business unit is also testing digital twinning technology that involves creating a digital replica of physical objects. It has run one pilot in the U.S. where it operates some of its largest factories.

Holbach says Laundry & Home Care is not yet ready to embrace digital twinning on a grand scale. “You have to pay six or seven digits just to license the technology and then pay seven-digit amounts to digitize a large number of factories, so you need to have a real business case,” he says. “If you are building a completely new digital plant for millions of dollars then the investment for a digital twin is worth it but we don’t see the margin of benefit for this technology at the moment. We are not pursuing this actively because we think a smart startup will come along and figure out a faster and cheaper way to digitize.”

But going digital “is not only about buying technology and putting it somewhere, we have to take the entire organization along,” he says. “It is a big change management endeavor. It is one of the reasons we don’t have single lighthouse factories. We want to involve as many as possible. You can’t do this top down. You have to have a bottom-up process that comes with training and skills assessment because the jobs of people will change. We usually recruit mechanical engineers, now it is more and more about systems and data analysts. We also need more systems engineers. We are hiring for these profiles but many others are too, so you have to be creative about how to engage good people.”

Earlier industrial revolutions took several decades to fully materialize, notes Holbach. This one will happen faster but it is likely to take more than a decade. “I personally believe we have way more to learn,” he says. “We are only at the beginning of what technology can bring us.”

WHAT IT DOES: Patented process digitizes liquid substances such as detergents while they are being produced. Data collected provides fast, reliable information on changes and impurities.

WHAT IT DOES: Automated stock-taking and inventory management based on smart multi-sensors and different autonomous carrier vehicles such as drones. Henkel is testing the technology in Serbia and Spain.

WHAT IT DOES: Provides a data science platform and data analysis experts to improve forecasting.