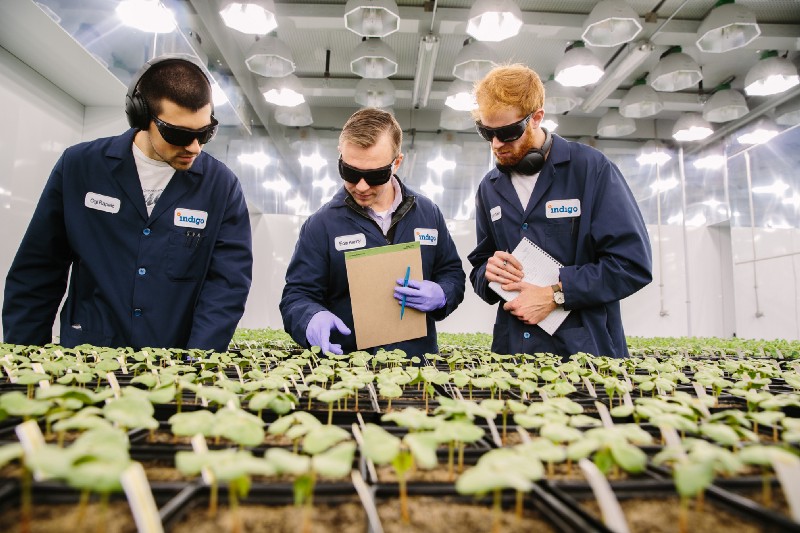 Startups like Indigo Agriculture are developing technologies to give farmers the potential to meet an expected 40% surge in demand for food by 2050.

Take the example of the Tom Family. After immigrating to the United States from Switzerland, the family made its way West, settling on a small patch of fertile Indiana prairie land in 1837.

Today, Tom Farms, which is still owned by the family, spans 20,000 acres. It is one of the largest suppliers of seed corn to the global agrochemical conglomerate Monsanto and a major supplier of corn and soybeans to pork, beef and dairy producers and for bio-fuel production. It is also serving as a test bed for technology created by ag tech startups like Indigo Agriculture.

Indigo, a 2017 World Economic Forum technology pioneer, uses plant microbiomes to strengthen crops against disease and drought to increase crop yield for farmers. On December 6 Indigo announced that it had raised an additional $203 million in financing to open or expand new offices in Australia, Argentina and Brazil and continue to invest in research. The latest round gives the company a valuation of $1.3 billion, according to press reports.

Indigo believes it can obtain 30% to 50% yield improvements over the next 10 years for cotton, rice, wheat and soy crops, helping the world meet an expected 40% increase in demand for food by 2050. The improvements also promise to save water and reduce the need per unit of production for fertilizers, fungicides and pesticides.

Tom Farms has planted Indigo Agriculture’s specially coated seeds on 750 acres and is waiting for the harvest to see what impact it will have on crop yield. The precise results are not available yet but look positive, Tom says.

“This is a brand new space — this is a moon shot — but this is what we need,” says Kip Tom, who has managed Tom Farms for the last 43 years.

Using microbiomes to improve plant health will not only help farmers like him but also those in developing markets who must grow crops in difficult conditions, says Tom.

As farmers around the world face demands to ramp up food production in response to water shortages, population growth and increasingly erratic weather due to climate change, a growing crop of startups are stepping up to help. Solutions range from robotics that replace the manual-labor part of the farming process or survey farm health to a variety of software, services and techniques.

Ag tech startups have raised global equity funding of $1.5 billion across 453 deals since 2013, according to the research firm CB Insights. In 2017, funding has already more than doubled compared to last year, and the number of deals has risen 65%.

Like an increasing number of farms, Tom Farms is turning to modern technology. It practices precision farming, an approach based on observing, measuring and responding to variables in fields. Drones provide aerial imagery and social scientists gather samples on every hectare grid so Tom Farms can know just the right amount of water and fertilizer each acre needs.

The use of microbiomes is attractive because they could help increase yield further while reducing water use and allow for more efficient use of fertilizer, by lowering the amount used to produce every bushel of crop, says Tom. “My goal is to increase productivity per unit of production and help our plants become healthier and I am confident they will.”

Like human microbes, plant microbes evolve over time to improve and protect plants but can be impacted by factors in their environment including heat, drought and modern agricultural practices that have introduced the widespread use of chemicals.

The serial entrepreneur David Perry, Indigo’s CEO, says he started with the premise that “if you could figure out which microbes are beneficial to plants and put these microbes back you would have healthier plants that would yield more.”

By using genomic sequencing and computational bioinformatics, Indigo assembled an enormous database of genetic information from these microbes, then applied algorithms and machine learning to predict which ones are most important to the plants’ health.

These specially selected microbes are used to coat seeds of corn, cotton, rice, wheat and soy crops. The company has commercialized the treatment for its first five crops. About a half a million acres have been planted with the specially coated seeds, mostly in the U.S., but the company is also starting to plant fields in Australia, Argentina and Brazil.

Initial results are promising, prompting CB Insights to recently name Indigo as one of 30 companies that could change the world.

Farmers report a 5% to 15% yield improvement from the initial treatment, says Perry. The rate varies depending on the crop and conditions. In addition the treatment is proving effective in helping plants use water more efficiently. “Preserving our fresh water is one of the biggest issues facing our planet and 70% of water goes into agriculture,” he says.

In September Indigo reported a 6% to 8% improvement in yield increases in water-stressed environments in wheat, cotton, soy and rice, which implies that the crops are using water more efficiently, says Perry.

“An approach that not only improves the nature of the seed itself but allows it to grow in a water-stretched environment with an improved yield can have a big impact,” says Mehmood Khan, Vice Chairman and Chief Scientific Officer of PepsiCo and a member of Indigo Agriculture’s board.

A key reason for the diminishing supply of water globally is that a majority of it is used in the production of agricultural products. “So if we are going to solve the world’s water crisis we are going to have to solve it through agriculture,” he says.

That’s important, says Kahn, because nitrogen run-off from fertilizer use in farms is polluting fresh water lakes, as well as rivers and oceans. The Gulf of Mexico, for example, “has a dead-zone the size of the state of New Jersey due to nitrogen run-off from the Middle West causing life to become impossible to thrive in the ocean,” he says.

Tom says he is confident that tech such as biomes, data science, CRISPR-Cas and others will play an increasingly important role in improving farming. “We have a social obligation to society and humanity to provide food sources for people in a sustainable way and at the same time to protect the environment,” he says. “We’ve deployed a lot of new technologies and I am challenging the next generation and telling them they are going to have to do that too when they take over.”