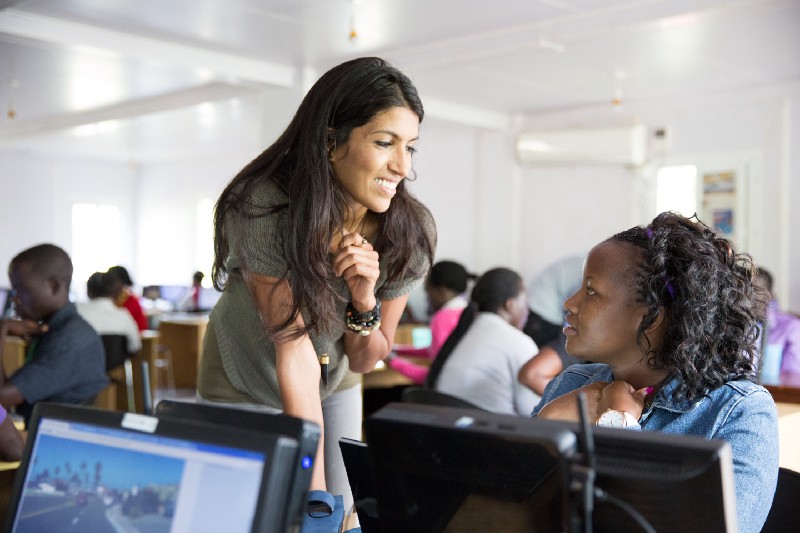 Samasource works with corporate partners to design digital work that can be done by populations in Africa and regions of India that are traditionally overlooked by Western companies.

The basic idea came to founder Leila Janah not long after she arrived in Africa to teach English more than a decade ago. Far from the narratives she’d heard about a population in desperate need of aid, she says, she instead met extraordinary people with strong educations who were hungry for work.

“I was shocked at how talented my students were,” recalls Janah, a Harvard graduate who grew up in California. “What I saw when I was living there was how much people wanted to work and how they were deprived of doing something meaningful.”

She wondered: Would it be possible to give these people work rather than just aid? The answer to that question was Samasource, a non-profit, social enterprise founded in 2008 to bridge the divide between charity and for-profit business.

After years of fundraising, cajoling skeptical partners, and refining its business plan, Samasource reached a huge milestone in 2016. For the first time in its history, the organization was profitable based just on its earned revenue from work contracts. No longer primarily dependent on donations, Samasource has shown that its corporate partners — which include Walmart Labs, Microsoft, eBay, Marriott, TripAdvisor and Volkswagen — don’t have to choose between the bottom line and social good.

“These companies are getting their work done and helping to solve poverty,” says Janah, a scheduled speaker at Slush, a technology conference in Helsinki.

Janah continues to use that momentum to expand on the Samasource concept in a variety of ways. In 2011, she founded Samahope, a crowdfunding site for medical procedures, that merged with Johnson & Johnson’s platform in 2015 and is today known as CaringCrowd. Meanwhile, Samaschool was launched in 2013 to train people in poor regions of the United States to get jobs in the expanding gig economy. And two years ago, she launched another social mission business, LXMI, a luxury skin care brand that employs women in Uganda to harvest natural ingredients and transform them into beauty products.

In late September Janah published a book about her personal journey and philosophy called “Give Work: Reversing Poverty One Job at a Time.” Her message has caught the attention of people like Reid Hoffman, co-founder of LinkedIn and a venture capitalist at Greylock Partners. Hoffman was one of the investors in the $3 million round of venture capital LXMI raised to launch the business.

That kind of backing is evidence of Samasource’s proof of concept. Samasource hit its stride when it decided to focus on computer vision technologies. The rise of artificial intelligence and autonomous technologies has created a surge in demand for the analysis of digital images. To train algorithms and drive machine learning, companies spanning every conceivable industry need humans to analyze and tag images.

Computer vision training turned out to be perfect for its savvy, English-speaking workforce that had expanded to countries including Haiti, India and Uganda. These teams are working with companies in industries such as e-commerce and automotive. “We’re now one of the top providers for image tagging for self-driving cars and other forms of computing,” says Janah. “And it’s not out of charity, because we’re one of the top-rated providers in terms of quality.”

“When people hire us, they hire us to do a job,” says Janah. “So we have to be able to do that job better than anyone else can do that job. If on top of that, we provide a social benefit, it’s icing on the cake for our partners.”

That formula, and the focus on computer vision, has put Samasource on solid financial footing. More critically, this has been a winning formula for employees. According to the most recent Impact Scorecard for the quarter ending September 2017, Samasource has hired and trained 14,636 people since its founding. On average, those employees make 1.7 times the salary they made before Samasource. And those who leave go on to make on average 3.7 times as much.

Janah is hoping the impact and example set by Samasource will continue to shift the way large companies think about work.

“If we really want to have an impact on poverty, the ideal model is to stop the problem from starting,” says Janah, adding that corporations need to “realize they can get their work done and make a social impact.”