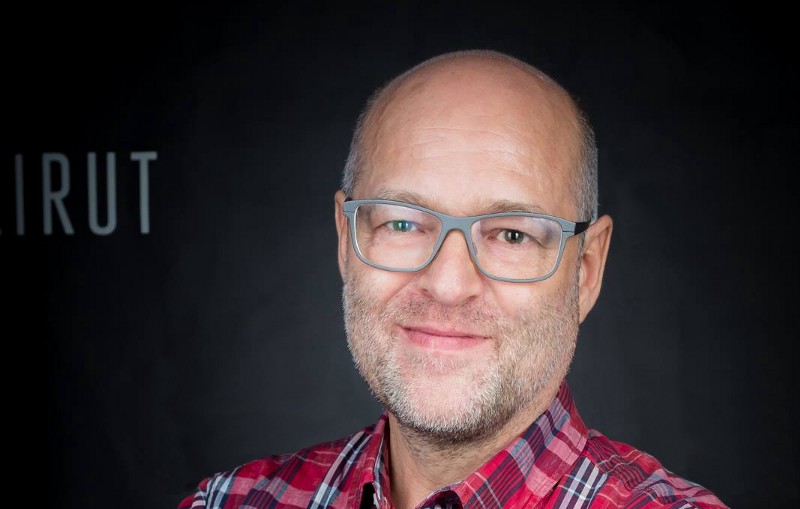 German technology entrepreneur Harald Neidhardt is the curator and CEO of futur/io, a new European think tank and educational facility focused on exponential technologies. The idea behind futur/io is to educate Europe’s business and government leaders about technology shifts and ensure Europe — and not just Silicon Valley — has a voice in crafting “desirable futures.”

Neidhardt built the first online booking system for Lufthansa with his team while working at his first digital agency in the nineties. Later, he was VP International at Pixelpark, a European interactive agency that specialized in developing e-commerce solutions. In 2005, he co-founded mobile advertising pioneer Smaato in San Francisco. He is a co-creator of Refugee First Response Center, a project together with Cisco and partners that converts shipping containers into mobile medical response centers for refugees and offers them a high-tech, on-demand translator pool capable of providing live translations by medical specialists in 50 languages.

The idea for futur/io came through the founding of MLOVE, a series of international events Neidhardt organizes that focus on innovation. He recently spoke to The Innovator about futur/io, which will launch in Berlin on December 14.

Q: What exactly is futur/io?

H.N: Futur/io is a new European think tank and educational institute that will train c-suite executives, executives involved with innovation and the heads of accelerators as well as investors and political leaders about where we are going with technology — both the threats and the opportunities. We will focus on how do we put these changes into a meaningful framework and keep some of our European values.

Q: Why is there a need to have a European spin?

HN: There is a lot of inspiration coming from Silicon Valley or executive programs run in Silicon Valley. But the problem that most people face when they return to Europe is how do I transform these ideas into a European environment? When people come back from Silicon Valley and talk about innovation their team mates often look at them as if they are from Mars. So then after two or three weeks of resistance the excitement wears off. We feel there is a gap and a new discussion is needed. What is the best way for European companies and European societies to integrate these technologies?

Silicon Valley is known for its innovation and China has moved from cheap production to a powerhouse that is coming up with its own innovative ideas. So what is Europe’s place in the world? How do we translate all these technology innovations to Europe? I feel we have to define our own way and decide — with all of this exponential change — how do we want to live, how do we want to work? How do we as a society deal with the fact that there will be less work? To do this we must educate corporate and political leaders. We have to start this discussion, otherwise instead of asking ‘how fast can we build sailboats’ we are going to be swept away by this exponential tsunami.

Q: Why is there a need for it now?

HN: Technology is presenting executives with completely new challenges. They no longer have to just worry about their traditional competitors; they have to keep asking themselves: where is the next blow coming from? Just a few years ago, nobody at Daimler would have thought that Google, Apple or Baidu would suddenly develop vehicles with artificial intelligence.

Think about the disruptive impact of the iPhone 10 years ago. Now we have 10 iPhone effects going on at the same time. But we should not think of these changes only as threats. We need positive scenarios, not only for the technology sector, but also for politics and society. The exponential leaps in development in the coming years open up great opportunities that we should take advantage of. At futur/io, we want to find positive answers to the developments in Silicon Valley and, in particular, bring European values ​​into the discussion, which are shaped by the open culture and diversity of our continent.

Together with the faculty experts, we will build a community that promotes innovation through new exponential technologies such as AI, nano- or biotech in Europe and networks the actors.

Q: Who are some of your faculty members?

Our big strengths will be the alumni network and the partners that are networked across Europe. That’s why futur/io does not have a fixed campus. In Salzburg, Austria our courses will take place at Urstein Institute and in Venice at H-Farm, a huge startup accelerator in Italy. For Berlin, we are cooperating with the Urstein University of Applied Sciences and are open to further partnerships.

Q: What will business and political leaders learn in your courses?

HN: For the first two days, our course in Berlin will teach you the basics: current technology leaps that are imminent. While most people are talking about blockchain, AI or robotics, we’re already looking ahead. Why? Because these developments will turn everything upside down in the next two years, but there is much more to come. The courses will also talk about practice. What is being developed in large companies, startups or universities? How do industries like energy, mobility or media see their future? We will not rely on second-hand accounts, but invite futurologists and practitioners from companies who will report directly from their development labs. An important focus will be on ethics, work culture and the social impact of exponential technologies. We want to work together to find the best practices for the future. The executives taking the courses should learn what challenges their companies are facing so that they can help shape the right direction in good time. We aim to give them the right tools to achieve this. At the end of the course there will be a certificate and European Credit Transform System credits which can be applied, for example, to a Master’s program.

Q: When will the courses start and how much will they cost?

Q: You refer to futur/io as the European Institute for Exponential Technologies and Desirable Futures. What exactly does “desirable futures” mean?

HN: Desirable futures is about making these upheavals positive: that we live healthier, more sustainably and with enough funding for art, culture and life-long learning. We need to think about a common vision for Europe. The open Internet has become extremely centralized and monopolies have been created, which is mainly about earning money. Look at GAFA: Google, Amazon, Facebook and Apple — they control almost every area. We want to address this with our own values, because Europe stands for openness and diversity.

We are proud of what has been developed here. The steam engine and the car were invented in Europe. The World Wide Web was developed at CERN, the MP3 standard was developed by the German Fraunhofer Institute and the new miracle material graphene was invented at the University of Manchester.

A key technology behind Amazon’s Alexa was invented in the UK and Google’s artificial intelligence AlphaGo was developed by the company Deepmind from London.

But the problem is that companies like these are bought up and leave. Europe needs its own Airbus for robotics or an Airbus for AI. We can do a lot of good things if we pull together but nationalist thinking gets in the way. If a French company wants to buy a German company it is prohibited and the reverse is also true. Two years later Google buys both of them and that is considered ok. So desirable futures means changing the framework conditions in Europe so that they can remain and grow. And it is important that we combine technical developments with higher values. We need a new kind of renaissance: just as the Medicis promoted the young Leonardo da Vinci, today we have to give thought leaders more room and let them look at our disruptive development from different angles, creating new values ​​for the future.