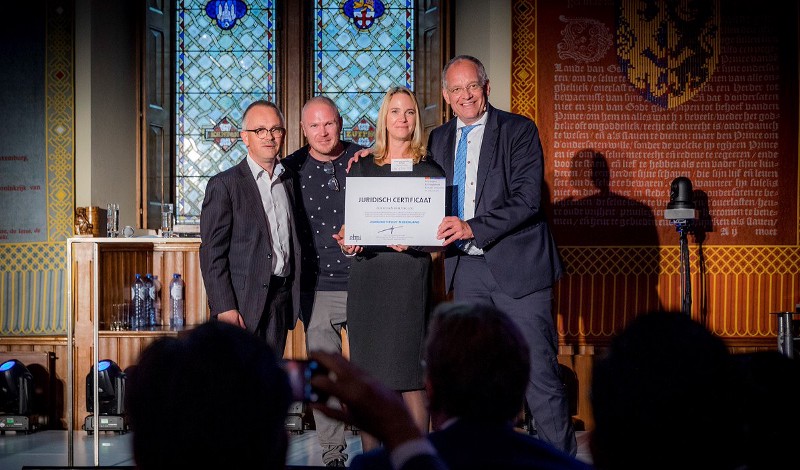 The Dutch government has been given légal certification for a digital ledger solution in the healthcare sector that would allow blockchain to be used for communications between the country’s health institutions, including hospitals and government agencies.

On September 28th Pels Rijcken, an independent law firm which often works with the Dutch government and other public entities, delivered the first legal certificate for a blockchain solution in the healthcare sector to Erik Gerritsen, Secretary General of the Dutch Ministry of Health, Welfare and Sport, during Blockchain Summit, a StartupFest event in the Hague.

“The first operational and legally certified blockchain application has arrived,” says Summit attendee Jeroen van Megchelen, CEO and co-founder of Ledger Leopard, a recently launched startup that offers an API library for developers and is building blockchain applications for big corporates and government agencies that don’t want to develop the technology themselves. It adds blockchain as a software application that integrates with existing technology, including mobile networks.

“Blockchain is said to be the biggest technological innovation since the advent of the Internet. We were eager to know is this really true? What could new technologies such as blockchain mean for healthcare? And what consequences would it have for previous agreements and principles for data exchange in healthcare?” explained Peter Snaterse, Sorginstuut Nederland’s coordinator, in a statement. “By building a practical test case for a fictitious citizen requiring healthcare we discovered that blockchain has the potential to turn the world upside down. It makes designing administrative processes more efficient and puts users in full control over their own healthcare information.”

Zorginstuut worked with the Pels Rijcken law firm to map designs of legal requirements and translate them directly into the build of the blockchain application. “Mijn Zorg Log complies with all relevant laws and regulations and, as far as we know, it is the first blockchain to have been fully legally tested,” Snaterse said in his statement.

The first real implementation, involving a Dutch health care institution, a private insurance company and Ledger Leopard, will be launched within the next month, van Megchelen said in an interview with The Innovator.

Applying blockchain to the healthcare sector brings four key advantage, he says. The permission-based structure of blockchain technology puts individuals in charge of their own data, allowing them to control which information will be released to a doctor or insurance company. Secondly, the blockchain connects healthcare data, which today is very scattered, onto one digital highway, making it far more efficient. Thirdly, the cost of administrating healthcare payments will be lowered by 10 times or more, predicts van Megchelen, because once a patient signals that he has used his digital wallet to pay for healthcare the insurance company is notified and a payment can be issued immediately. And finally, since transactions on the blockchain are immutable so if someone wants to try and change the data they would have to break into six different data bases, making it is nearly impossible to hack, he says.

The Netherlands is on its way to becoming a blockchain nation. The Dutch government has launched more than 25 blockchain trials, Dutch banks, energy companies, pension funds and the Port of Rotterdam are all testing the digital ledger technology and the country is home to what is billed as the world’s largest blockchain hackathon, attracting entrepreneurs from 13 countries.