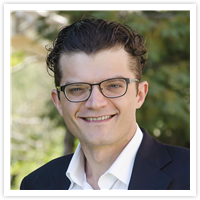 Chronocam, a 2017 Technology Pioneer, has developed “bio-inspired” systems that allow machines to “see” in much the same way that the human brain processes images from the retina. Applications include making interactions between humans and industrial robots safer, improving augmented or virtual reality headsets and superior guidance for autonomous cars.

The three-year-old French company has raised a total of $20 million in venture capital from investors that include Intel Capital, Renault Group and Robert Bosch Venture Capital.

Chronocam’s technology aims to emulate the way vision works in nature, in contrast to traditional machine vision architectures used for the past 50 years.

The key difference is that traditional systems — such that used by Mobileye, an Israeli company sold to Intel earlier this year for $15.3 billion- record everything and send the information up into the cloud. This requires the development of very expensive processors that are able to handle massive amounts of data, Chronocam CEO Luca Verre said in an interview with The Innovator.

The Paris-based startup has developed a different way of processing the information, a new kind of vision sensor optimized for computer vision which is event-based rather than frame-based. Chronocam’s system only captures what is changing, drastically reducing the amount of data that needs to be processed, he says.

“The second advantage is that our sensor can react very fast to the changes,” says Verre. “In frame-based systems when in a fixed point in time you have a frame or an image, the problem is that between images you lose information.” If the information lost happens to be a pedestrian stepping out from behind a bus the results could be disastrous in a scenario involving an autonomous car, which would be relying on the frames to make driving decisions, he says.

To improve on current machine vision technology Chronocam designed a new vision-centered fabless semiconductor based on a model of the human eye. “It is a silicon model of the retina, a silicon eye,” says Verre.

The company has also developed an algorithm to process the signal in much the way the cortex processes images from the retina.

Chronocam plans to launch an end-to-end system by year’s end. The first iteration of the technology will be focused on industrial applications to make collaboration between humans and robots inside factories safer. The technology could also be used to monitor where people are inside a factory and understand how efficiently they are working. Although Chronocam has already attracted the interest of the auto industry, its technology will not be ready to be installed in autonomous cars for at least five years, Verre says.