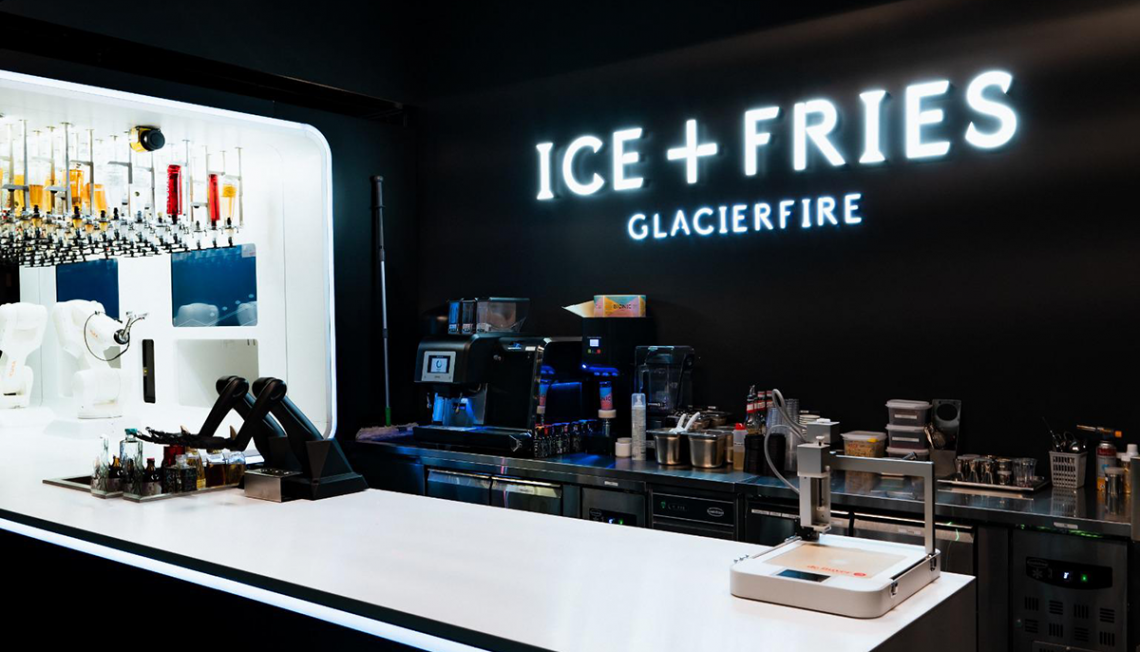 This week the world’s first bar built for post-pandemic life opened in Reykjavik, Iceland. The ICE+FRIES bar features a series of advanced technological elements, including the latest model of Makr Shakr’s robot bartender  Toni, who can perform a range of motions such as shaking, stirring, and muddling. The bar aims to explore the future of dining out, as many hospitality businesses around the world are striving to reimagine their operations post COVID-19. It is just one example of how robots are taking over human tasks during the pandemic in both consumer-facing and industrial settings and there may be no going back.

On Wednesday The University of Southern Denmark announced that its researchers have developed the world’s first fully automatic robot capable of carrying out throat swabs for COVID-19.The equipment uses a 3D-printed disposable arm that is automatically swapped after each patient. The robot takes a swab with a specially designed disposable tool that hits the exact part of the throat from which the sample should be taken.It then drops the swab into a jar and seals the sample by screwing the lid. And inside hospitals across Europe, robots are being deployed for disinfection, medicine and food delivery and vital signs monitoring, helping to reduce infection risk of all personnel.

“This pandemic showed us just how useful robots can be during a crisis and the fact that they can actually save lives”, s Ana Maria Stancu, euRobotics Board member and CEO of Bucharest Robots, told EU-Robotics. Bucharest Robots integrated robots into a modular hospital set up for COVID-19 patients. One of its UVD robots disinfected a space of 7500 sqm in just a few hours, two robots offered information to patients and one waitress robot deliverd food, all without any human contact.

Before the pandemic, automation had been gradually replacing human work in a range of jobs, from call centers to warehouses and grocery stores, as companies looked to cut labor costs and improve profit. But labor and robotics experts say social-distancing directives, which are likely to continue in some form after the crisis subsides, could prompt more industries to accelerate their use of automation. (https://www.nytimes.com/2020/04/10/business/coronavirus-workplace-automation.html )  And long-simmering worries about job losses or a broad unease about having machines control vital aspects of daily life could dissipate as society sees the benefits of restructuring workplaces in ways that minimize close human contact.

“Pre-pandemic, people might have thought we were automating too much,”  Richard Pak, a professor at Clemson University who researches the psychological factors around automation said in an interview with the New York Times. “This event is going to push people to think what more should be automated.”

The grocery industry is leaning more on automation to free up employees to deal with the crush of demand during the pandemic. Brain Corp, a San Diego company that makes software used in automated floor cleaners, said retailers were using the cleaners 13 percent more than they were just two months ago. The “autonomous floor care robots” are doing about 8,000 hours of daily work “that otherwise would have been done by an essential worker,” the company said. At supermarkets like Giant Eagle in the U.S., robots are freeing up employees who previously spent time taking inventory to focus on disinfecting and sanitizing surfaces and processing deliveries to keep shelves stocked.

In public spaces robots are being deployed to help prevent the spread of coronavirus. For example, a robot dog, rather than police, is roaming a Singapore park to enforce social distancing.

In Milton Keynes, England, which has one of the most extensive deployment of autonomous delivery robots in the world, demand is stronger than ever, due to the pandemic, reports the New York Times. Once seem as a gimmick by residents, the delivery robots have become a valuable tool during the lockdown, even though they can carry no more than two bags of groceries. The robots are integrating themselves into community life in very human-like ways. They deliver groceries to doctors, nurses and other employees of Britian’s National Health Service (N.H.S). for free and even join the Thursday night tribute to the N.H.S., blinking their headlights as residents clap and cheer from their doorsteps.

Overall, the market for autonomous mobile robots and autonomous ground vehicles is forecasted to generate over $10bn by 2023 according to Interact Analysis. That prediction relies on data from before the COVID-19 pandemic.

The seeds of a robotic revolution have been sprouting for over a decade. Collaborative robots, still a small fraction of the overall automation industry, have become insanely good at performing repeatable tasks around humans, reports ZDNet. Mobile robots are whizzing down logistic warehouse aisles and taking inventory of products at Walmart.

“The party line in the industry has been that the robots aren’t meant to replace workers but to make work easier for talented professionals,” writes ZDNet. “Marketing professionals get oodles of money to sell that premise, and it’s a palatable sales pitch, certainly easy enough to swallow in a labor crunch during a strong economy when the creep of automation is tough to quantify in terms of human toll. The pandemic may change that. Workers are furloughed in all sorts of industries, companies are closing shop or tightening belts, and that deferential tone toward the worker, whom automation was touted as helping, has been replaced by another pitch: Automation can stand in where human workers have to stay home.”

Amazon is rumored to be in talks to buy driverless car startup Zoox.

Coronavirus is serving as a catalyst for deploying drones in new ways.

Vivendi’s Dailymotion video platform and China’s Huawei Video on Tuesday announced a partnership to offer international and local video content, as Huawei continues its plans to increase its presence in France and Europe.