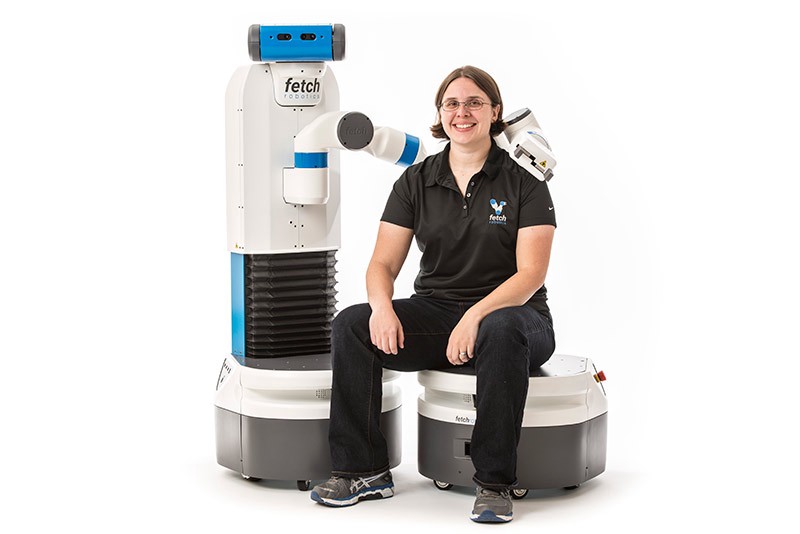 AMRs autonomously track, find, pick and transport materials from one place to another in a warehouse or any other logistics facility, often changing the way warehouses function.

“The ongoing growth in e-commerce and consumer demand for same-day delivery have implications for the kind of labor you want and on how fast that labor needs to provide units per hour in order to ship out,” says Melonee Wise, CEO of Fetch Robotics (in photo above). Add a growing need for error-free order fulfillment and space optimization and you get the factors that have made manufacturing and warehousing an ideal market for robotics.

Fetch Robotics’ hardware is combined with an on-board cloud-based software which allows AMR systems to be deployed in less than a day, says Wise.

To date, Fetch Robotics has developed two kinds of robots : Fetch, a mobile manipulator, has a telescopic spine and an adjustable mobile arm. Freight, a mobile platform which comes with a series of accessories like carts. It comes in two sizes which can either support 500 kg or 1,500 kg loads.

The FetchCore cloud software provides customers with a platform that allows them to quickly set parameters for their AMRs : “You map out your warehouse using a joystick and edit the map according to different criteria, like zones you don’t want your AMR to go, speed limited zones and drop-off locations,” says Wise. “It takes 15 minutes to set up the map and three days to train your robot and your employees.” . Fetch AMRs are equipped with radars and 3D cameras to avoid collision with humans or equipment in real time.

Fetch Robotics was created in 2014 by Steve Hogan, founder of Tech-Rx, a venture capital fund investing in early stage tech companies, before he stepped away to let Wise run the company. Wise, a mechanical engineer, is an AMR technology veteran: she previously programed robotic hardware as co-founder and CEO of Unbounded Robotics, a robotics startup and she spent seven years as an engineer at Willow Garage, a robotics research lab and incubator. Both are now defunct.

Last December, Fetch Robotics raised a $25 million Series B round of venture capital, giving it a valuation of $48 million from investors such as Sway Ventures and SoftBank.