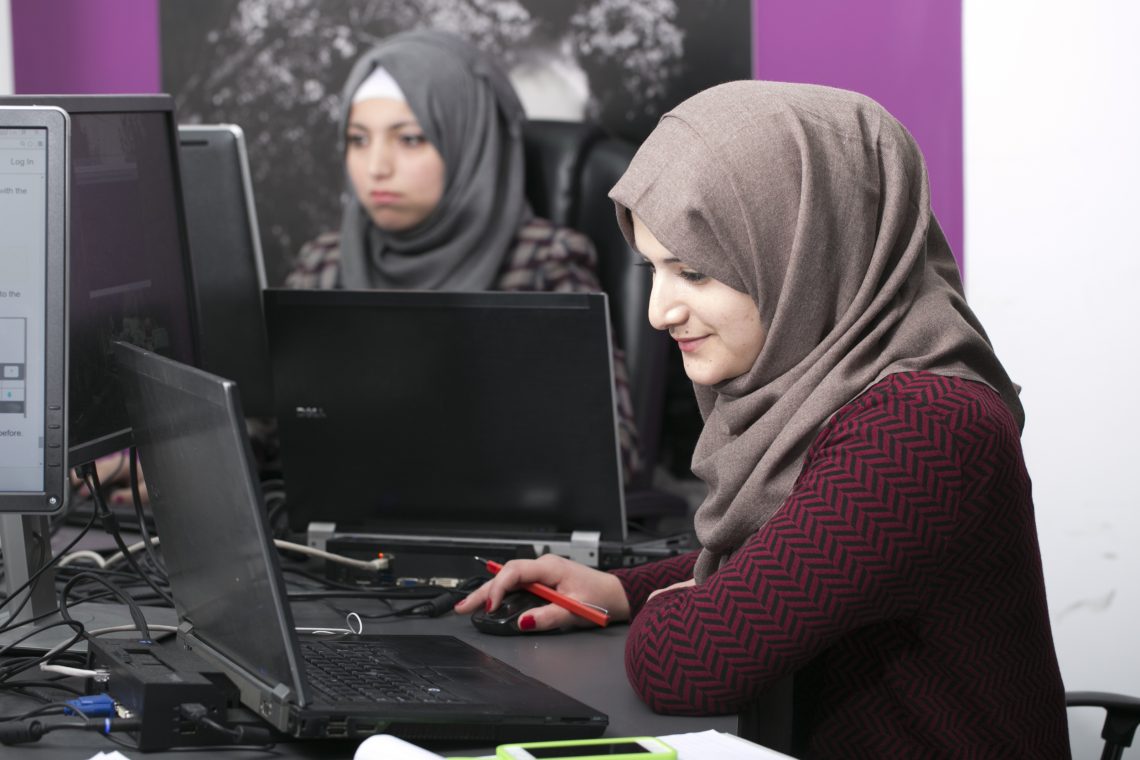 Unemployment continues to hover at 30% or more. About half of the population is under the age of 24, with little hope of finding decent jobs, creating a breeding ground for terrorism.

Against this bleak backdrop, companies in the U.S. and Europe are helping to create a different future for Palestinians by kick starting a local high-tech sector. Palestinians working in the West Bank are already delivering everything from digital commerce software to artificial intelligence projects focused on computer vision, natural language processing and big data analytics for large enterprises. And plans are in the works to add semiconductor hardware design and include Palestinians in Gaza in the mix.

Outsourcing IT development to the Palestinian territories is a chance to do well by doing good, says Frank Mueller, CEO of AXSOS, a Stuttgart, Germany-based computer support and services company that has built a subsidiary in the West Bank town of Ramallah. The majority of Palestinians are excluded from the global economy. Helping build a tech sector there addresses one of the U.N.’s Sustainable Development Goals: creating decent work and economic growth, factors that could also help defuse political tensions, he says. “A company looking for the cheapest price for software will not come to Palestine but if you’re looking for a good price, good quality and to make an impact then Palestine is the place to go,” he says.

Placing A Bet On Palestinians

AXSOS, placed a bet on Palestinians ten years ago and has never regretted it, says Mueller.  It built a subsidiary in the West Bank to offset the IT skills shortage in Europe. The company which focuses on three areas of IT – infrastructure, IT Security and digitalization-   considered India as an outsourcing destination but rejected it because he says it would have “required hiring two or three managers to oversee every single communication to get the results you want.”   AXSOS was looking for “people who are willing to adapt to our customer culture and mindset who are capable of anticipating and solving problems,” says Mueller.“Our objective was to take Germany’s focus on process and Middle Eastern human-centered culture and hospitality and marry what is good from both cultures to create a new customer experience and that is exactly what we have succeeded in doing.”

The company currently employs around 100 people, including 40 highly qualified Palestinian software developers and support engineers at its Ramallah subsidiary, he says. It has also started an academy to upskill university graduates and hopes to train anywhere from 5000 to 7000 developers over the next five years. “Palestinian youth are fed up with the current situation, they want to have different, positive lives,” he says. “They are so hungry for change. That is what makes them so teachable.”

Palestinian software developers are able to compete with their counterparts in India and Eastern Europe when it comes to assuring the work meets quality standards, says Mueller. “What makes the difference is how do you reach the result: how many iterations does it take to get the software you want to have? If you compare with India they will deliver to your specifications, even if there is something wrong and it does not serve your purposes,” he says. “But Palestinian developers have very high anticipation skills. They have learned over the years to read the environment in order to make proper decisions. Thanks to the political situation it is a skill they have developed, and this skill is a real benefit when it comes to software development.”

Husam Barkawi, CEO at ITG Software, a Cincinnati, Ohio-based software engineering company, has set up development centers around the world, including China. When he mentioned that he was looking to set up an additional center in India during a visit to his native Palestine his father asked “why don’t you do it here?” Barkawi’s first reaction was “it will never work,” he says. But he decided to give it a try and got started by hiring the top three computer science graduates from Arab American University. Today ITG’s development center in Nablus employs hundreds of software developers. “If we weren’t able to develop best-in-class software our operation would not be sustainable,” says Barkawi. “We have proved that the Palestinian high-tech sector is now ready for prime time. We are doing very critical work for multi-billion-dollar companies and we are getting it done and getting it done right.”

Barkawi says the Nablus facility has been able to “establish a digital commerce practice that is one of the best in the world.” The customer roster speaks for itself. It includes many of the biggest retail brands and department stores in the U.S. and Europe. “We plan to grow this business substantially,” he says. “Five years from now I plan to employ thousands of developers in Palestine to help move the needle for the IT economy.”

Barkawi is also CEO of Reconess, an Ohio-based company that develops AI and deep-learning technologies including facial recognition and image processing solutions. Reconess is also outsourcing development of AI software used in facial recognition, computer vision, natural language processing and Big Data analytics to Palestine. ITG has developed a six-month program to upskill IT professionals to handle this work and is in talks with the World Bank to use one of their programs to scale AI training in the Palestinian territories.

The message to corporates is “Palestine is a serious destination for IT outsourcing that is worthy of your consideration,” says Barkawi. “Give it a chance. You will be happy with the quality and will help tremendously in building the economy and moving the Palestinian youth in a different direction.”

As tough as things are in the West Bank they are worse in Gaza, says Bassma Ali, a Palestinian computer scientist with an additional degree in management and leadership. Ali, who was born in Austria, moved to Gaza as a teenager and was educated in America. When she returned to Gaza in 2008 the outlook was grim: some 90% of women with degrees in IT were unemployed and about 70% of men. Ali launched a social impact company called GGateway that is trying to change that by adding semiconductor hardware design to Palestine’s fledging outsourcing industry. She is negotiating a number of partnerships to help the sector take off and has recruited the help of Anwar Awad, a former general manager and vice-president of Intel’s Design Engineer Group who previously spent 21 years as vice-president of R &D, Mixed Signal IP and Digital IP at Synopsys, an American company that makes advanced tools for silicon chip design. Awad is currently the CEO of Akrostar, a well-funded Chinese semiconductor design startup, in addition to being a partner in GGateway, which is a non-profit. GGateway recently opened a center for semiconductor hardware design in the West Bank. The intention is to involve Gaza at a later date.

Some upskilling and improvements in the education system will be needed to get Palestinian developers up to speed on semiconductor hardware design, says Awad, who grew up in Ramallah but has long been based in the U.S. “This is doable,” he says. “The World Bank can make that happen.” What would be helpful, he says, is for companies to give Palestinians some hardware design work to test their skills and help kickstart the market while they are being trained. “Then if they are happy with what they see they can supply more work,” says Awad. “We did this when I was at Intel,” he says. “We started training Palestinians and after six months they were as good or better than people in the field anywhere in the world.”

Awad emphasized that there is a need for more IT companies and big corporates to outsource development work to Palestine. “All it takes is some good will from a company that has a need,” he says. “But it takes a little push to make it happen. Upper management needs to be sold on the idea.”

Rowan Alawi, a 29-year-old Palestinian woman with a degree in IT who grew up in a small West Bank village isn’t waiting for corporates to employ her skills. She launched her own startup, which started life as a digital marketplace to connect construction workers in Palestine looking for day work to construction sites. When the pandemic hit and business dried up, the company pivoted. She and a colleague spent a year studying the construction market in Saudi Arabia. In February the company soft launched a software solution they developed that helps large construction companies digitalize every aspect of the workflow. Her company is currently following up on 800 qualified leads and was able to set up 30 meetings after only two weeks of prospecting. “Construction tech is a new field and the MENA region is booming,” says Alawi. The name of her startup, Amal, neatly sums up the dreams of the Palestinian high-tech sector. When spoken in Arabic the name means work. When spelled out in the Latin alphabet, it means hope.