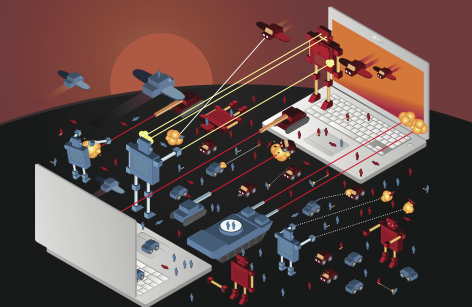 Quantum computing, artificial intelligence and digital identity products pose a critical risk to the hyper-connected global economy. Unless action is taken now, by 2025 next generation technology has the potential to overwhelm the defenses of the global security community, says a just released 14-month study conducted by the World Economic Forum and the University of Oxford. The study, based on the expertise of more than 100 leaders in the cybersecurity community spanning businesses, governments, academia and civil society, concludes that the current approach to cybersecurity needs to be overhauled and recommends specific actions that need to be taken by business and governments to ensure readiness for the next phase of cyber warfare.  If these recommendations are not adopted the report warns that  “we will be left with a digital ecosystem that is not resilient to the emerging systemic threat and risk landscape and the potential benefits of the global digital ecosystem may not be realized.”  .

Cybersecurity should no longer be seen as being simply an issue of protecting systems and networks. Instead, government and business leaders need to think in terms of assuring the integrity and resilience of an increasingly inter-connected world. Interdependencies between organizations are growing, as corporates increase their reliance on shared technology-service providers and supply chains, notes the study. This means that the impacts of a cybersecurity failure in one corporate or government entity has the potential to cascade across dependent organizations. What’s more cybersecurity failures could be systemically catastrophic to economies and societies, as cyber harms have the potential to cascade through a widening scope of critical functions across industrial and critical infrastructures. Multiple heterogeneous sectors could fail, leaving no alternative providers while systems are recovered.

The study identifies five emerging challenges to securing the digital ecosystem. There is a widening cybersecurity skills gap; a fragmentation of technical and policy approaches; existing operational capabilities are not sufficient technically to address new technologies and data formats and will not deliver the pace and scale of collaborative operations (including information sharing, collective response, and detection, disruption and deterrence of cybercrime) that will be needed to address the emerging risks; security is not being considered an integral component of technology innovations; there is ambiguity around accountability.

Managing the risks will require businesses and governments to address a number of things: filling capability gaps with new cybersecurity tools, creating policy interventions that incentivize collaboration and accountability and galvanizing leadership action from businesses to plan more strategically around emerging risks so the most critical infrastructures do not fail society.

Preparing for the next phase of cyber warfare was a key topic at the Forum’s Pioneers of Change Summit this week, which included a session entitled: “Preparing For A Cyber Pandemic.” For more on the Summit subscribers can access The Innovator’s key takeaways from the event.

Ralph Lauren is introducing several new ways for consumers to shop its products this holiday season, including making its polo player and pony logo a scannable experience using Snap technology. Consumers can scan the logo using Snapchat’s camera to generate an augmented-reality experience in the app, including a lens depicting Ralph Lauren gift boxes with red ribbons. Users can tap the virtual gift boxes to see an animated version of the logo and then take a photo with the ribbon to send to friends. After the holidays, the lens will change throughout the year. (For more on how AR is being used by retail and other sectors see The Innovator’s startup of the week story about Banuba.)

Chinese social e-commerce giant Pinduoduo plans to raise $6.1 billion in new financing through shares and convertible bonds to invest in opportunities in online agriculture and responsive manufacturing. Pinduoduo and its biggest rivals, Alibaba Group Holiding and  JD.com have all launched initiatives focusing on farmers and rural areas to help alleviate poverty in these communities while providing more consumers nationwide with direct access to fresh produce and other goods, cutting out the middlemen in the supply chain.After the Covid-19 pandemic dealt a severe blow to China’s poorest farmers, the country’s three largest e-commerce platforms also introduced initiatives to support agriculture producers, helping them sell their products through their online platforms, offering logistics support and sales promotions to attract more consumers.

The European Union wants a massive increase in offshore wind to help clean up the electricity industry and aid the recovery after the pandemic.To meet its mid-century goal of becoming the world’s first climate-neutral continent, the region needs to boost offshore wind capacity to 300 gigawatts by 2050 from just 12 gigawatts now, according to an EU roadmap published on Thursday. That will require as much as 789 billion euros ($940 billion) in investment, mostly from utilities and energy majors.

BP is programming Boston Dynamics’ Dog Robot Spot to read gauges, look for corrosion, map out the facility and even sniff out methane on an oil rig operated by BP Plc nearly 305 km offshore in the Gulf of Mexico   Adam Ballard, BP’s facilities technology manager, told Reuters tasks performed by Spot will make the work on the rig safer by reducing the number of people. It also will free up personnel to do other work.

Nasdaq will buy Verafin, a software company that uses artificial intelligence to help banks detect money laundering and fraud, for $2.75 billion, the companies said November 19.If completed, the Verafin acquisition would be New York-based Nasdaq’s largest deal in more than a decade and its latest effort to diversify away from its core exchange business into technology

More than 30 major Japanese firms will begin experiments next year towards issuing a common, private digital currency to promote digitalization in one of the world’s most cash-loving countries.

Italian mobile payments outfit Satispay has raised €93 million in funding from a share sale to a clutch of international investors, including Square and Tencent The company – Italy’s leading provider of mobile payment services at the point-of-sale plans to use the new financial resources to fuel its European expansion. During the Covid-19 pandemic Satispay experienced significant growth in consumer and merchant signups and in the usage of in-app services, reaching more than 450,000 new users and 35,000 new affiliated merchants this year, including tier-one retailers like Carrefour, Auchan, Autogrill and KFC.

A little over two years after its $753 million acquisition of the prescription medicine delivery service PillPack, Amazon has finally launched Amazon Pharmacy  its online and mobile prescription medication ordering and fulfillment service.Using a secure pharmacy profile, customers can add their insurance information, manage prescriptions and choose payment options all through Amazon’s service. And in another small push toward wider healthcare services, and not just selling items, users are provided with “self-service help” tools on Amazon’s portal, and they also have the option to speak to pharmacists over the phone for advice: After launching its own line of over-the-counter drugs in 2019, this is arguably Amazon’s broadest push into the healthcare business to-date, one that could open very large, new revenue opportunities for the company, especially as the ongoing COVID-19 pandemic pushes consumers both toward more remote care and using online channels for all their shopping needs.

Dutch chipmaker NXO Semiconductors said it had entered a strategic relationship with Amazon’s cloud computing unit to help cars communicate with data centers. NXP is one of the biggest suppliers of computing chips to automakers and Amazon Web Services is the largest cloud computing service by revenue. The companies said the partnership would involve making a new NXP chip designed to aggregate data from a car’s systems and send it over the Internet to work better with Amazon’s data centers.

Volkswagen unit Electrify America said on November 16 it has rolled out a new payment feature that would allow some customers to pay for charging their cars by plugging the vehicles into its charging stands.The new feature, “Plug&Charge”, will let owners of specific models of 2021 vehicles bypass the need to manually pay by card or app at Electrify America’s more than 500 U.S. charging stations, it said. After an online registration, the charger will identify, authenticate, authorize and bill the customer’s registered account for the charging session.

Researchers have uncovered a worldwide campaign targeting businesses using a recently-disclosed vulnerability called ZeroLogon. Symantec researchers have documented companies and their subsidiaries in 17 regions, involved in automotive, pharmaceutical, engineering, and the managed service provider industry, who have been targeted.