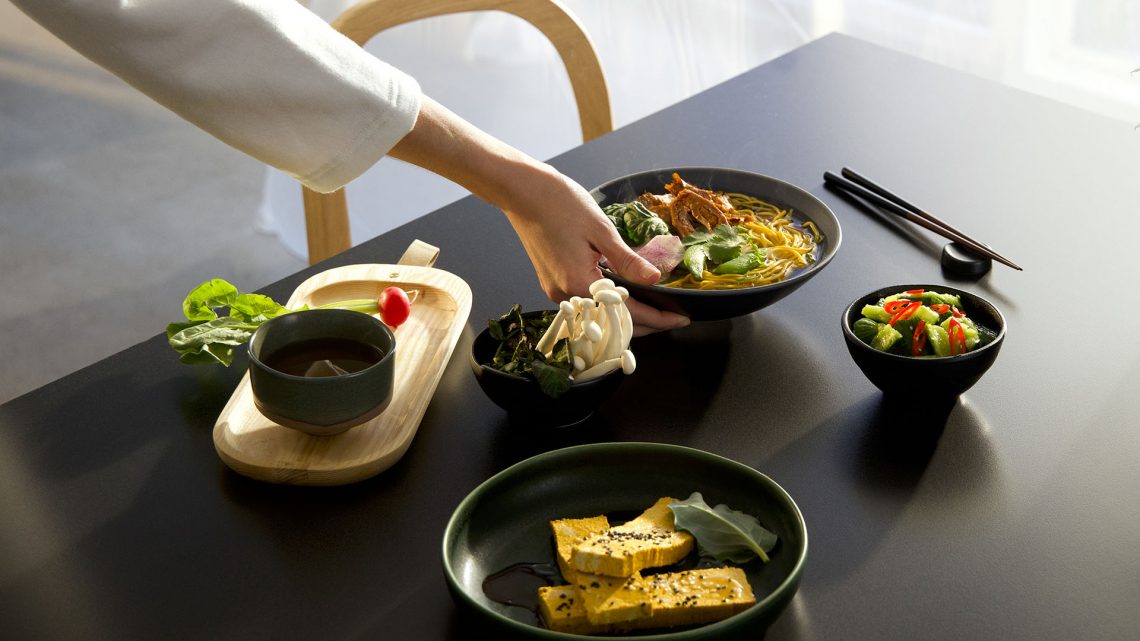 Solar Foods, a Finnish startup is cooking up a way to make nutritious food ingredients from thin air.

The Finnish startup uses air and electricity to develop protein ingredients for packaged foods such as breads, pasta and dairy, plant-based meat alternatives and as a culture medium for real meat production from cells.

“We can be present in a ready-made lasagna— in the pasta, the sauce or the meat — without the consumer ever knowing how the physics behind it were provided,” says Solar Foods CEO Pasi Vainikka.

The single-cell protein it produces – called Solein – can be developed independently of weather and climate conditions, freeing global protein production from the limits of traditional agriculture. It can be produced in harsh environments, such as desert and Arctic areas, or even outer space, where traditional food production is not possible.

Solein is produced using a natural fermentation process similar to that used in the production of yeast or lactic acid bacteria. During the bioprocess microbes are fed with gases (carbon dioxide, hydrogen, and oxygen) and small amounts of nutrients. Solein’s amino acid composition compares well with known protein sources such as soybean and beef, the company says. And, it has the added advantage of binding Co2 instead of causing it.

The approach promises to significantly reduce the environmental impact of food production by separating it from both agriculture and cattle raising.  Solar Foods has already partnered with an established food company to help scale its solution. It is yet another example of how collaborations between startups and corporates can help solve the U.N.’s Sustainable Development Goals.

The company has raised €51 million – including €10 million from Finland’s oldest pension fund and €10 million from the Finnish government’s climate fund – to build a production facility, in Vantaa, about 20 minutes from Helsinki’s city center. The facility will not only house the first commercial Solein production line, but also Solar Foods’ new headquarters and a future food experience hub, offering the food industry and the public a view into a future where food production is sustainable and independent of agriculture.

Solar Foods expects to gain approval from the European Food Safety Authority and begin commercial Solein production in 2023.  The factory will be able to produce 100 tons of Solein per year – enough to produce protein for four million meals, says Vainikka.

The Finnish startup forecasts the cost of large-scale production to be around €6 per kilo, which is significantly less expensive than beef or salmon, he says.

Last year the four-year-old startup was one of only three winners from outside the U.S. in the Deep Space Food Challenge organized by NASA and the Canadian Space Agency, and one of just two international entries from outside of the U.S. to receive a special $25,000 prize for exceptional innovation.

It is working on ways that Solein could eventually be produced in space, but for now Solar Food’s primary focus is on improving the way food is sourced on earth, says Vainikka. “We see foods as platforms for our protein,” he says.  “In order to scale the technology, we will need to be included in a lot of consumer products, therefore we are planning on taking a B2B approach and are very interested in partnering with food companies.”

Collaborating On R&D With The Food Industry

Fazer Group, a 130-year-old Finnish company with net sales of €1.1 billion euros in 2021, is the first traditional food company to work with Solar Foods.  Fazer operates in the bakery, confectionery, non-dairy and plant-based food markets and is also a major player in the Nordic grain milling market and, increasingly, in FoodTech. The company has a strong presence in the Nordics and the Baltics but also exports food products to over 40 countries.

Fazer led a €15 million series A financing round into Solar Foods and has established a strategic partnership with the startup that focuses on R&D, innovation, and commercial development. Its aim is to be the first food company to launch food products containing Solein in Europe.

“Solein is an extremely nutritious and sustainable ingredient,” says Jussi Loponen, head of Fazer Group R &D. “We could use it to enrich our future products with high quality protein and micronutrients such as certain minerals or vitamins.”  Loponen describes the taste of Solein as “mild and pleasant” and, he says, compared to plant proteins, “it has a very smooth mouth feel.”

While Fazer Group works with other food tech companies, Solar Foods is the only startup it has invested in, to date, because it fits well with the company’s sustainability ambitions, says Loponen.

Sustainability in food and nutrition is high on Fazer’s research agenda. The company sees innovations and FoodTech as key enablers in executing its strategy, says Loponen. “Our strong heritage gives us the roots necessary to take on bold innovations,” he says. “Through strategic partnerships and investments into FoodTech, we can and will be part of creating a more sustainable future.”

The investment into Solar Foods and the strategic partnership with them will take Fazer forward on this journey, says Loponen. “We are very focused on future food production so making protein or food out of thin air is definitely something we want to be a part of.”

A Recipe For Change

The adoption of Solar Food’s technology by traditional food companies like Fazer could have an important impact on climate change as an estimated 20% of global greenhouse gas food production and land use are caused by global greenhouse gas emissions and 40% of habitable land is consumed by livestock. Solar Foods claims that its process uses 100 times less water than plant production and up to 500 times less then the production of beef.

Countries are falling short of their pledges to reduce greenhouse gas emissions and action must be taken now to hit targets, says the latest report from the UN Intergovernmental Panel on Climate Change (IPCC).The agriculture, forestry, and other land uses (AFOLU) sector accounted for as much as 22% of total GHG emissions between 2010-2019, the report states.

To keep global warming at 1.5°C  above pre-industrial levels by 2050, methane emissions need to fall 34% by 2030 and 44% by 2040, the IPCC says. Meat, dairy, and rice production are significant contributors. Agriculture offers the second biggest potential share of reduced emissions, through efforts such as  agroforestry, improved rice cultivation, and better management of livestock and chemical use. Natural ecosystem restoration and decreased methane emissions will depend on dietary changes, as well as shift in the way the world produces food upstream, the report says; it highlights emerging technologies like cultivated meat, plant-based proteins, and precision fermentation as playing an important role alongside sustainably produced animal-sourced food/

A whole range of food tech startups are working on alternative to animal products, including U.S.-based Air Protein, which is focusing on creating meat from air.

Experts say radical change is needed is the planet is going to nourish 10 billion people by 2050 while protecting natural resources and biodiversity.

Adding More Partners To The Mix

Vainikka is the former head of VTT Technical Research Center of Finland’s Neo Carbon Energy program. It was through this research on clean energy that the idea for a proof-of-concept of developing not just fuels and chemicals but food from thin air was established. Solar Foods “is an example of a type of solution that is emerging more and more in the field of tech from the intersection of different disciplines,” he says.

The partnership with Fazer Group is just the start, he says. Solar Foods is eager to work with a variety of traditional food companies to test its use in dairy-free ice cream, yogurts and cheeses, dips, hotpot noodles, baked goods and more. Depending on the supply chain and geography it can either deliver Solein or offer a turnkey on-site solution, in which it operates the technology and biology involved. “We want to help traditional food companies provide good, tasty food that is also environmentally friendly,” says Vainikka.  “We aim to prove that new technologies can start to provide the bulk of calories and nourishment from alternatives to pasta, dairy and meat.”