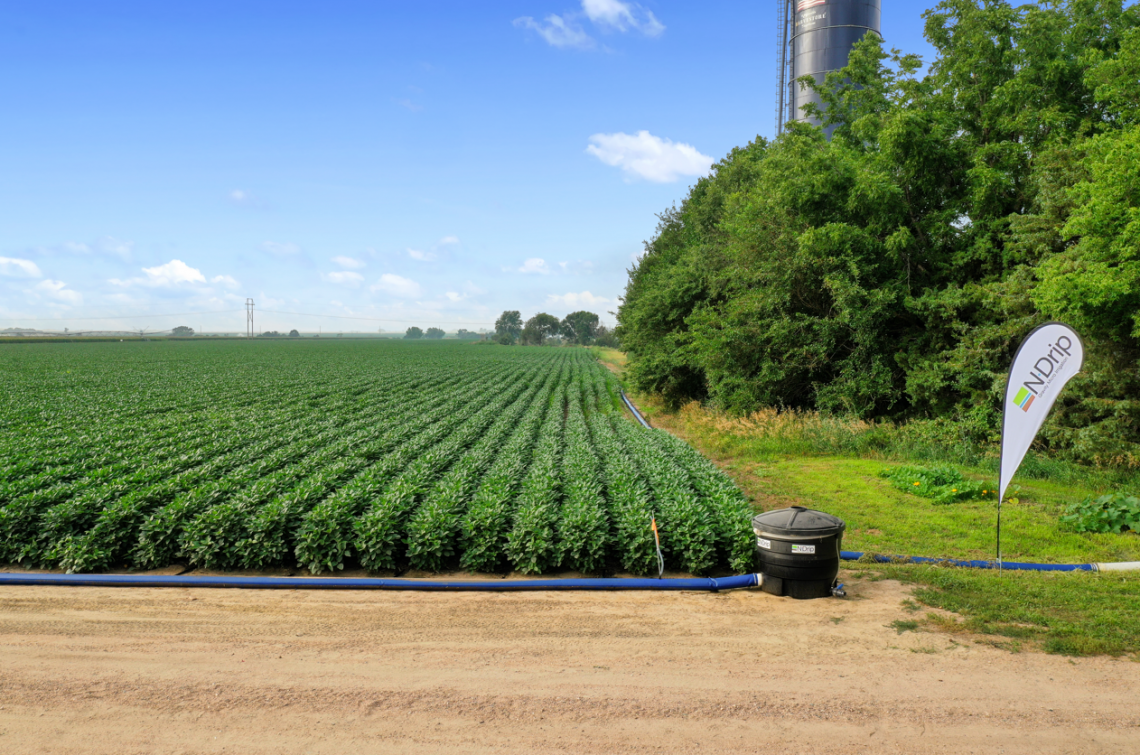 There is a reason why some refer to water as the new oil. As it becomes scarcer wars may be fought over it. Some 2.3 billion people already live in water-stressed countries, according to the UN-Water 2021 report, and 700 million people worldwide could be displaced by water scarcity by 2030.

Since 72% of all water withdrawals are used by agriculture, aiding farmers to find ways to irrigate their crops more efficiently is a crucial part of solving the growing global water crisis. That’s where a partnership between global beverage and convenient foods company PepsiCo and Israeli startup N-Drip comes in. Many farmers make use of flood, or trench, irrigation to bring water to their crops, a method which floods the field at regular intervals, losing up to 70% of the water used and diluting fertilizer. This technique is still deployed by the majority (some 85%) of all irrigated fields worldwide- roughly 600 million acres – even in water-scarce locations.

PepsiCo, which sources over 25 crops across 60 countries, and N-Drip are teaming to offer farmers an innovative new irrigation method, yet another example of how corporates can collaborate with startups to help solve the U.N.’s Sustainable Development Goals.

Until now alternatives to flood irrigation have been too expensive for many farmers to use if they want to sell their low-margin crops at a profit. A replacement for flood or trench irrigation,  N-Drip’ irrigation system is powered by gravity and harnesses the water-saving benefits of high-pressure drip irrigation, but with low energy, operating and maintenance demands—making it more accessible to all types of farmers and nearly all types of crops.

“Startups like N-Drip can really help farmers improve their operations and become more sustainable,” says Rob Meyers, VP, Sustainable Agriculture, PepsiCo. “This is really important because the risk to farmers is outpacing the ability to innovate.”

PepsiCo says it is promoting use of the technology not only for crops it will use in its own products but across the global farming ecosystem. “There is a huge lever for scale if farmers can use this across crop rotations,” he says, “We are very open to working collaboratively to help scale this technology. We don’t see this as something competitive.”

Farmers in India and Vietnam who have adopted N-Drip’s technology through PepsiCo’s sustainable agricultural program, are using 50% less water, achieving larger crop yields, and reducing their use of fertilizers, says Meyers. “When the units of production increase for less input there is a double benefit – a better livelihood for the farmers and lower greenhouse emissions,” he says.  “Commercial growers in the U.S. are also seeing benefits: eye popping double-digit improvements.”

Water, Water Everywhere and Not A Drop To Drink

The world has lost 50% of its water per capita due to population growth and climate change and it wastes a lot of what is left through inefficient agricultural practices, depriving a significant portion of the global population of drinking water.

“Many startups first come up with a technology in a garage somewhere and then look for a business model and a market,” says N-Drip CEO Eran Pollak. “We started with a global problem – the global water shortage – and asked what technology could help us cope with this shortage?”

N-Drip, which has raised $40 million in funding, was founded in 2015 by Professor Uri Shani, Israel’s former Water Commissioner. An inventor and entrepreneur in the water and agriculture sector, Shani holds a BSc in Soil & Water Science, MSc in Soil Chemistry, and a PhD. in Soil Physics, afrom the Hebrew University in Jerusalem. Pollak, who joined soon after the launch, is a former Senior Deputy Director of Budgets in the Israeli Ministry of Finance and holds BSC and MSc degrees in Agricultural Economics from the Hebrew University in Jerusalem.

The N-Drip team set out to improve on drip irrigation technology, which is used in the U.S., as well as other parts of the world, but represents less than 5% of irrigation systems used globally. These high-pressure systems force water through tubes and drips it through the soil to the roots of plants. The advantage is the system uses exactly how much water is needed. The disadvantage is that these systems are expensive, require a high level of water pressure and energy use and the water used needs to be purified, Pollak says.

N-Drip’s technology offers similar advantages but reduces the need for pressure because it works with gravity alone. Any type of water can be used, without the need for filtration. And, says Pollak “we offer the holy grail of irrigation – a solution that is applicable to a wide range of crops grown around the world including corn, rice and sorghum.”  The fact that farmers do not need a generator or filters reduces the cost of irrigation by 70% says Pollak, saving thousands of dollars per acre. After one or two seasons N-Drip’s system pays for itself, and farmers can start making money, he says.

What’s more N-Drip’s system is equipped with intelligent software that feeds data from the fields back to the startup’s control room for analysis, allowing the company to determine precisely how much water a farmer should use and the optimal harvest day for the crops.

Pollak says the company is convinced that if only 50% of the world’s farmers transformed their flood irrigation to N-Drip’s Gravity Micro irrigation system that the global water shortage would be solved.

A Different Kind Of Partnership

PepsiCo, an active leader in the scaling and adoption of regenerative farming practices under its pep+ (PepsiCo Positive) program, is currently running pilots with around 30 sustainable agricultural startups. The startups are sourced by PepsiCo Labs, PepsiCo’s technology venturing arm, which is tasked with identifying and embedding breakthrough technology startups into PepsiCo’s operations to help solve complex global problems and meet business goals.

The type of partnership the global conglomerate has formed with N-Drip is a first, says Meyers. There are several reasons for that. One is that N-Drip “has really innovative technology” and that it was “already ready-for-primetime” when it was connected to PepsiCo, says Meyers. Highly efficient irrigation is not new, but it tends to be expensive, uses a lot of energy and the pumps and filters require a lot of maintenance. N-Drip’s system is easy to use and maintain, he says.  “If you know how to change a float valve in a toilet you can operate and maintain this system,” says Meyers.  “When we tested the technology, we recognized that it worked really well, and the farmers liked working with it.”

Many startups don’t realize that the best of technologies will not succeed if the ecosystem is not in place for scaling it, says Meyers. When changes are made to the way farmers irrigate their fields it effects the way they produce and rotate crops, he says. “When we talked to N-Drip about this they really got it and were keen to build up on-the-ground support to help the farmers,” he says.”

The objective, over the next four years, is to use N-Drip’s technology to irrigate 10,000 hectares of land in North and South America, India, Greece, South Africa, and other locations where crops used in PepsiCo products are grown.  Based on individual economic situations PepsiCo will offer some financial incentives to farmers but “at the end of the day it is the farmers that will make the decision about investing in the technology,” Meyers says.

N-Drip is also putting skin in the game. It is hiring people on the ground to go into fields everywhere from the American Midwest to India, before earning revenue from the local farmers. “They need to understand the local farmers’ needs,” says Meyers. “It is going to take some time.”

The seven-year-old company is now active in 17 countries and is currently planning to open a factory in the U.S. in the state of Arizona. (It already operates a factory in Israel). “We think like a startup, but we are also an industrial global company,” says Pollak.

PepsiCo is not N-Drip’s largest customer, but it is the startup’s biggest and most global partner, says Pollak. “We are already working with them in India, South Africa, the U.S., and Thailand. Each of these markets is completely different. We are committed to solving any issues that come from the field. It is an exciting project that has opened doors for us in places we did not operate before and has given us more visibility globally.”

Ensuring that the technology will scale requires a different type of investment than many startups can make, says Meyers. That is what makes the collaboration so powerful, he says. PepsiCo’s partnership with N-Drip promises to enable the duo to “overcome not just technology barriers but also cultural barriers and drive real change in farming,” he says.