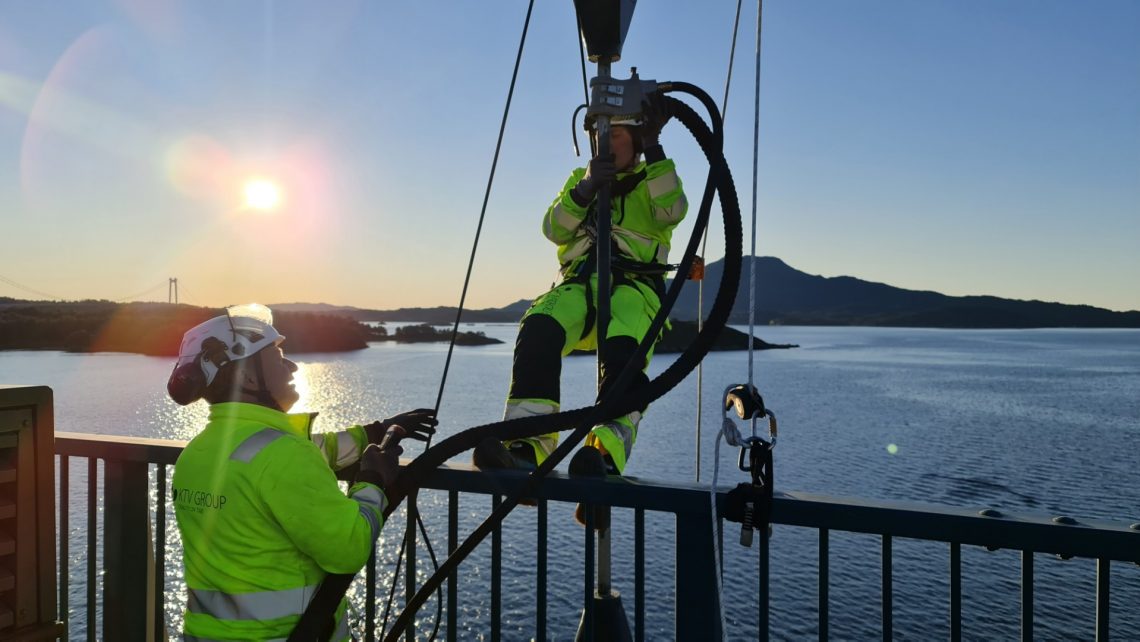 Abrasive blasting to get rid of rust and corrosion on oil rigs, cargo ships, power plants and municipal bridges causes anywhere from 1.5 million and 2.25 million tons of paint microplastic leakage into oceans each year. That’s the equivalent to anywhere from 150 to 225 billion empty plastic bottles.

Pinovo, a Norwegian scaleup  that has developed technology which stops paint microplastic emissions from surface maintenance entering into the oceans, is helping customers like Shell, Chevron, Equinor, and EDF to stem the tide. It is yet another example of how corporates are working with young companies to solve the United Nation’s 17 global Sustainable Development Goals. (SDGs).

Pinovo was the first company to be accepted on the World Economic Forum’s UpLink platfom, which was created to foster broader participation in meeting the SDGs. “The UpLink connection is as much about raising awareness of the issue of ocean paint microplastic leakage and positioning Pinovo as an OceanTech company, as it is about customer acquisition,” says Declan Mc Adams, Pinovo’s Chairman.

That’s been a big help to the 11-year-old scale-up. “We have developed and patented the technology and proved it commercially,” says Mc Adams. “Now it is about adoption and growth.”

The microplastics polluting the ocean come from the impact of corrosion, wear and tear and, most significantly, from the traditional open-blasting methods used to maintain steel surfaces. Traditionally maintenance is only done once every three to five years because it involves stopping operations. In the interim the steel surfaces of ships, oil rigs and bridges starts to rust and the paint, 50% of which is plastic, starts to fall off and pollute the oceans.

Open grit blasting and high-pressure water jetting are the predominant methods of surface maintenance. These are used at an industrial scale worldwide with various, but very limited, degrees of waste collection and recycling.

Pinovo says its patented circular sandblasting can reduce the emissions of microplastics from surface maintenance to zero. In addition, the scale-up’s zero-emission, circular solution also recycles the blasting material, reducing grit consumption by 80% to 90% and generating significant reductions in Co2 emissions.

Its tools combine blasting with an industrial strength vacuum cleaner. There are two separate hoses – one hose blasts off the rust and old paint, and it is sucked up into the system by the other hose. The grit and waste are then separated in the system, and the grit is recycled for further use.

The system offers anywhere from 33% -63% cost savings over traditional open blasting, depending on the level of surface corrosion, because with rope access (see the photo) no sheeting/scaffolding is needed, unlike traditional methods it is not necessary to stop operations to do the cleaning, and there is no cleaning up afterwards. The recycling of grit used to prepare steel surfaces for cleaning can contribute to an annual reduction of more than 11,000 tons of Co2, according to the company.

Other advantages listed by Pinovo include no ricocheting grit, so no damage to surrounding equipment and structures; the fact that there are no dust clouds and paint residuals means it can be used in sensitive areas; and since the system uses no water or steam means it will not damage electrical systems or cause new corrosion.

One of its customers is Klaveness Combination Carriers (KCC), a global shipping company that carries both wet and dry bulk cargos. Through their high utilization and efficiency, KCC says its vessels emit up to 40% less Co2 per transported ton compared to standard tanker and dry bulk vessels in current and targeted combination trading patterns. The company’s goal is to develop a zero-emission combination carrier and reach carbon-neutral operations by 2030. “Our solutions are unique in the world and challenge the way things have always been done,” says KCC CEO Engebret Dahm. “It is in our company culture to accept to trial things.” So, when Pinovo approached the company with a way to do maintenance cleaning that it says is faster, cheaper and greener KCC was eager to try it out, says Dahm. “We are working hard to be more energy efficient and sustainable so we are saying to startups and suppliers ‘test your solutions on one of our ships and if it works, we will buy it for the whole fleet’.” Pinovo’s approach “proved promising,” he says. “We tested it on one ship, and we are likely to use it on more.”

French energy company EDF’s Heysham 1 nuclear power station in Lancashire, England has been successfully using Pinovo equipment for on-site grit blasting work for four years, says Fiona Murray, a design engineer at the power station.  “One big appeal is the significant reduction in waste generated, typically around one fifth of what would be generated otherwise,” she says.  “This has obvious environmental benefits as well as lower handling cost for us, so it is a win-win.”

When lead paint is involved and the resulting waste is contaminated with lead, a significant reduction in volume of waste generated  “is really worth pursuing,” says Murray.

“The response we get from using a small company like Pinovo is also a big part of the appeal,” she says. “We always get a bespoke response that suits us, from a technical support team that understand our requirements as they have taken the time to visit our site and see how they can tailor their support to us. That really matters.”

Getting The Supply Chain On Board

Despite such positive reviews from multinationals securing contracts was initially an uphill battle. Large companies generally outsource maintenance to outside contractors. “Companies like Shell and Chevron loved us but the guys in the middle were not always as keen,” says Mc Adams. Open-blasting methods used to maintain steel surfaces require scaffolding and sheeting, and considerable amounts of manual labor for preparation and cleaning afterwards. Pinovo’s method does away with the need for sheeting and a lot of scaffolding and reduces the number of hours of manual labor needed to do the job. Pinovo didn’t succeed in aligning everyone’s interests at the outset, says McAdams. Eventually it found a way to structure their offer so that outside contractors could share in the value created and got their buy-in. “The key takeaway is that to achieve new technology and innovation adoption you have to really understand the supply chain, and everyone has to be a winner,” says Mc Adams.