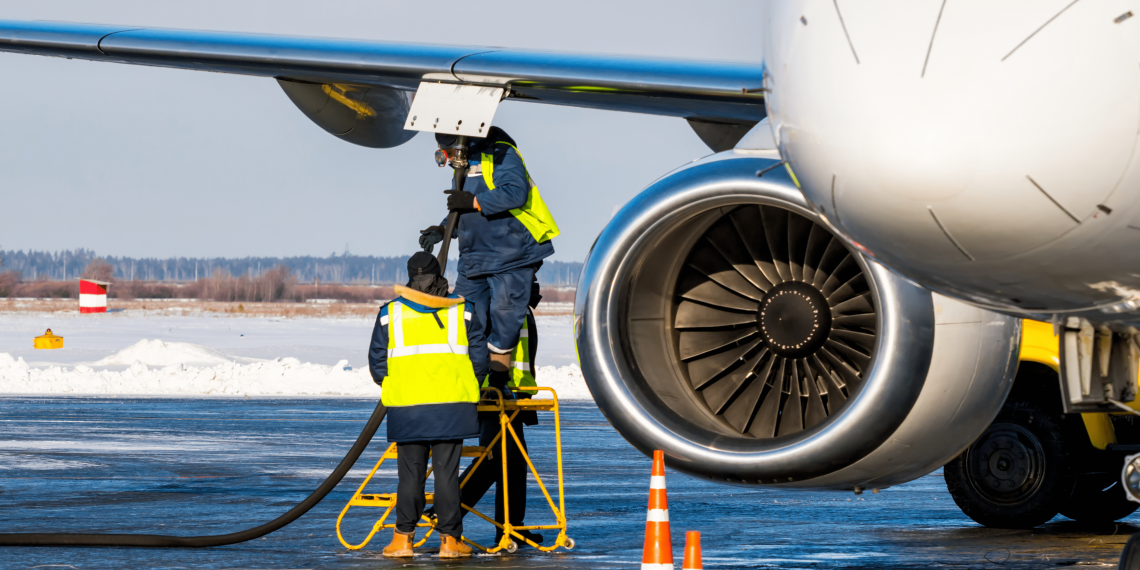 SkyNRG, a Dutch scale-up focused on building up Sustainable Aviation Fuel (SAF) capacity for the aviation sector to meet its 2050 Net Zero commitment, has partnered with promising tech companies in the industry such as World Economic Forum Technology Pioneer LanzaTech to access the best new SAF technologies; it has sourced and blended SAF and distributed it to 40 airlines and 50 corporates worldwide as part of proof-of-concept trials; it is developing three €500 million SAF producing facilities on two continents; and it has corporate customers like KLM and Boeing lined up to buy what it produces.

Despite SkyNRG’s efforts  and supportive legislation like Europe’s Fit For 55, the EU’s plan to turn climate goals into law by reducing net greenhouse gas emissions by at least 55% by 2030 the Dutch company will only be able to fill 2% of one airline – investor KLM’s – fuel consumption when its first SAF production facility is up and running.

Globally only about 0.1% of airline fuel contains SAF today, due to both quantity and price issues. To meet IATA’s goals some 2,500 SAF producing facilities will need to be built over the next 28 years These projects need to be financed and ways must be found to incentivize the purchase of more sustainable fuels, which today cost more than double what airlines are paying for fossil fuels.

SAF is just one of a crop of advanced energy solutions that promise to help put the world on track to meet climate change targets. Others include peer-to-peer energy generation, green hydrogen, innovations in nuclear power and fusion, electric car charging, energy storage and carbon management technologies.  Deploying these new solutions at scale will require investment to grow from under $150 billion to over $1 trillion a year by 2030. New types of collaborations and actions by governments, financial institutions and traditional large corporates will also be needed. Although progress is accelerating it is not happening anywhere near fast enough, say experts.

To help speed up the energy transition the World Economic Forum this week convened an inaugural meeting of a new Advanced Energy Solutions community comprised of technology companies, project developers, financial institutions, investors, and the large corporates who will buy the green solutions. (The Innovator moderated one of the sessions.)

The new Forum community aims to speed up deployment of advanced solutions from decades to years and months while eradicating the green premium and maximizing societal benefits, says Maciej Kolazkowski, the Forum’s Manager, Advanced Energy Solutions Industry. “We look forward to supporting creation of strategic partnerships and collaborations to support this mission,” he says.

The Role Of Government  In Addressing The Energy Crisis

Group discussions at this week’s meeting highlighted frustrations with governments around the world – everything from millions of dollars being invested in the wrong places to regulations and red tape that hinder rather than help the sector.

That said, there is reason for optimism.  It took India’s Greenko, one of the world’s leading energy transition and decarbonization solutions company, with an installed Renewable Energy capacity of ~7.5 GW across wind, solar and hydro capacities with presence in 15 states in India, two years to get the government to believe in its vision to decarbonize and reindustralize through grid scale, long duration 24/7, on-demand integrated renewable energy storage and its ability to deliver giga tonnes of green hydrogen, green ammonia and other green molecules by working with global technology leaders to adapt traditional technologies in a 10X scale  “Once they got it then it was like magic,” not only leading the way for Greenko but also for other young energy solution companies to flourish, says Nagendra Dandamudi, Greenko’s Executive Vice-President. “We have a once-in-a-lifetime opportunity to design a new infrastructure for a new world.”

The group discussed how identifying the right people inside the right government ministries is key and how the Forum’s Centers for The Fourth Industrial Revolution might act as an interface between advanced energy solution companies and governments to help make the right connections.

At the same time that trillions of dollars of investment are needed to fund advanced energy solutions high interest rates are reducing the value of future earnings, decreasing valuations, increase the cost of borrowing and effectively undermining the potential to rapidly deploy and scale advanced energy solutions. One of the sessions focused on how required levels of investment can be achieved in this difficult macroeconomic climate.

Despite having assets and cash flows and other fundamentals in place some of the advanced energy solutions companies at the meeting complained that there were turned down for loans by banks.

“Our risk appetite is tied to the past,” admitted an executive from one major European bank. “We haven’t a really innovative way to look at risk assessment for future solutions. Climate risk is the biggest risk there is so not making these technologies a priority is definitely not the right thing to do.”

Creating a new carbon economy will require educating financial institutions about new technologies and business models and coming up with innovative ways of financing technology scale-up and deployment.

In October LanzaTech announced a funding partnership with Brookfield Renewable, and its institutional partners, to co-develop and build new commercial-scale production plants that will employ LanzaTech’s technology. The funding partnership commits an initial $500 million to be invested by Brookfield Renewable in constructing and operating new  projects that have achieved certain pre-agreed milestones. The funding will be provided through the Brookfield Global Transition Fund, which is the largest fund in the world focused on the energy transition. Brookfield will be LanzaTech’s preferred capital partner for LanzaTech Carbon Capture and Transformation opportunities in Europe and North America and following initial investments totaling $500 million, Brookfield said it could commit to making an additional $500 million available for investments in the strategic partnership if sufficient projects are available at the agreed milestones. Brookfield will also invest $50 million in LanzaTech to support further corporate development.

The deal with Brookfield is significant because up to now funds from financial backers have gone to wind and solar infrastructure projects but have never been applied to the process industry.

The Role Of Traditional Corporates

Traditional industry has a key role to play in ensuring this type of  financing  happens, says Natalie Adomait, Brookfield Managing Partner and CIO for the Transition Fund, and a  member of the new Forum community. In the case of LanzaTech, for example, Brookfield’s conviction about LanzaTech’s technology was reinforced by the fact that Arcelor Mittal has evaluated, tested and invested in the technology and Lanzatech also has partnerships with Indian Oil, Suncor, Woodside and Sekisui.

Another example of how corporates can help is that earlier this year LanzaJet, a sustainable fuels technology company and renewable fuels producer that spun-off from LanzaTech, announced it has secured financing for its Freedom Pines Fuels plant in Soperton, Georgia, through the Microsoft Climate Innovation Fund. The Microsoft Climate Innovation Fund has made a $50 million  investment to support the construction of LanzaJet’s (and the world’s) first alcohol-to-jet SAF production plant. The innovative structure of Microsoft’s financing is expected to enable LanzaJet to bring lower-cost sustainable aviation fuel and renewable diesel to the global market.

Bank of America announced earlier this year that it will support the production and use of one billion gallons of SAF by 2030 through financing, investment, capital markets and procurement activities. This includes a 10-year partnership with SkyNRG to support the production of 1.2 million gallons of SAF per year beginning in 2025.  “These types of commitments help to de-risk these novel projects,” says SkyNRG co-founder Theye Veen, a member of the Forums’ new community. “All the stakeholders need to take a bit of risk.”

SAF produced from waste oils – known as hydro processed esters and fatty acids (HEFA) will always be limited in quantity. Other approaches, which are more complex to make and likely to be more expensive in the short-term, include Alcohol-To-Jet, which uses a range of different feedstocks, including municipal waste, to produce biofuel; and Power-to-Liquid SAF, a synthetically produced liquid hydrocarbon, which uses renewable electricity and water and carbon dioxide (CO₂) as main resources.

No single approach will fulfill demand from all the world’s airlines “so we need to scale all the technologies available and some that don’t even exist today,” says Veen.

Some 50 novel SAF producing facilities would need to be built to allow just one airline to fuel up 100% with sustainable fuel.

“We don’t know which technology will prevail in the years to come but we need to look at what is needed to gain momentum in volumes and lower prices per liter,” says Claus Bauer, VP Technical Fleet Managment & PO Engineering, Swiss International Airlines, another participant.  “This is why we support research and pilot projects, such as one with Switzerland-based startup and solar fuel pioneer Synhelion, driving the creation of SAF alliances, and promoting know-how and market development. The need for SAF is there and we are happy to discuss how we can be of support, especially regarding the sales risks for young companies.”

“Collaboration  – which is what the new community’s meeting this week was all about – is the key to success in speeding things up,” says SkyNRG’s Veen.  “If a group of stakeholders push all in the same direction, then we will move the needle.”