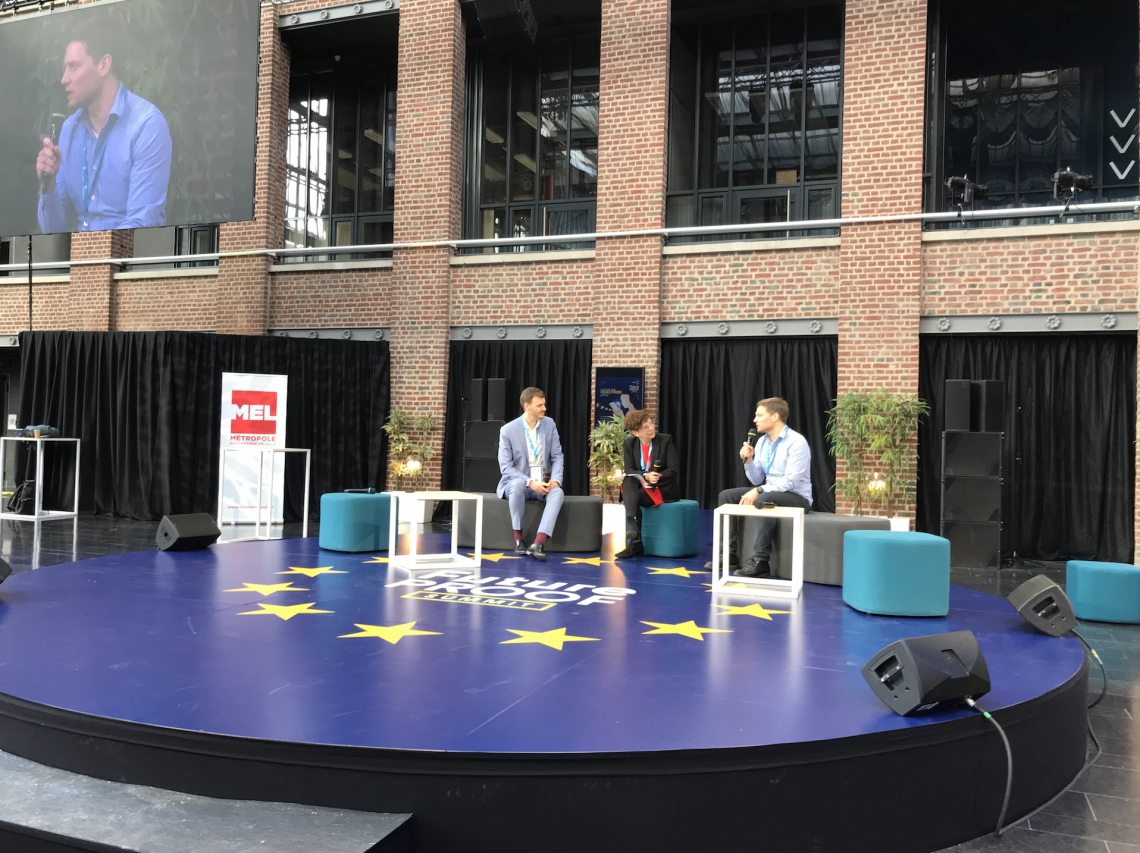 As an antitrust complaint against Microsoft filed with the European Union’s top competition regulator was making front page news in the March 17 edition of the Wall Street Journal, OVH, the company that filed the complaint, and startups and scale-ups from across Europe were gathering in the French cloud-computing company’s home town of Lille to discuss a different way to combat Big Tech: the creation of an annual open-air supermarket of made-in-Europe digital solutions.

The FutureProof Summit, which attracted 2000 attendees, including startups, corporates, and the head of the European Innovation Council,  highlighted scale-ups such as OVH, Linagora, Exotec, Vade, Ineratec, a maker of clean fuels, and Thermondo, which is promoting the energy transition with innovative heat solutions. The green tech companies participated in a panel moderated by the Innovator’s Editor-in-Chief. (see the photo).

OVH, which was valued at €3.5 billion in France’s largest ever IPO last October, provides clients with an alternative to cloud services offered by Microsoft, Amazon, and Google. But it, and other would-be European rivals, have nowhere near the market share of Big Tech, even in their home markets.

The OVH complaint focuses on the way Microsoft licenses its products, such as its Office productivity suite, that may make it more expensive to use cloud services that compete with Microsoft’s Azure cloud, according to The Wall Street Journal article. The complaint, which OVHcloud filed last summer but which hadn’t previously been reported, also alleges that Microsoft’s software doesn’t work as well on other cloud services, making it harder for them to compete, the article said.

Anti-competitive practices by Big Tech are not the only obstacles to the success of Europe’s startups: Europe’s consumers and many businesses aren’t conscious of their dependency on foreign tech and are unaware of alternatives, says FutureProof Summit founder Nicholas Brien, chairman of the executive board of Lille-based Euratechnologies, Europe’s largest and oldest incubator, and President of the European Startup Network, an industry group which represents startups in Brussels. (see The Innovator’s Interview Of The Week with Brien). The FutureProof Summit intends to change that.

Sovereignty is important “because it is a mirror of our values,” says Brien. It is also crucial for the growth of Europe’s own tech sector and economic growth.

“We now have, as part of the pan-European [COVID] recovery plan, tremendous budgets for digital transformation.  Some €760 billion have been allocated for pan-European recovery and some 20% of €150 billion is for digital transition,” says Brien, the former president of France Digitale. “The question is whether this €150 billion of our taxpayer money will end up being invested in European startups to build a sound EU startup system or in the bank accounts of the U.S. Big Tech players.”

Alexandre Zapolsky, CEO of Linagora, a French software company that develops open-source ethical software alternatives to U.S. tech offerings such as Twake, an opensource alternative to Microsoft Teams, told the conference that Europe must reject U.S. and Chinese approaches and develop its own digital path. “We don’t want to see all users just as consumers and not as citizens under the U.S. model which is driven only by business or the Chinese mode which is driven by the state,” he says.  He called for support of made-in-Europe digital solutions such as SenX, Clever Cloud, Rapid.Space, CryptPad and Eelo.

Europe can achieve tech sovereignty but it needs to stop trying to catch-up and focus on where it can lead in future, argued speaker Andre Loesekrug-Pietri, chairman of the Joint European Disruptive Initiative (JEDI), a foundation which describes itself as a European moonshot factory.

The best place to start is to face reality, he says.  Europe convinces itself that it may not have created global artificial intelligence (AI) companies but is leading in AI research but “even that is not true anymore,” says Loesekrug-Pietri. He pointed to a recent top global AI conference as evidence: 1200 research papers were submitted by the U.S., 290 from the U.K., 200 from Switzerland and 210 from Europe as a whole.  “Of those 1200 papers many were written by French expatriates,” he says. “How can we make sure we don’t just try to catch up and instead invest in the Next Big Thing?”

JEDI is focusing on trying to identify what’s next in areas such as semiconductors and AI. It creates challenges and gives grants to startups, corporates or research organizations that submit the best proposals. “We don’t pay for efforts, we pay for results,” says Loeskrug-Pietri.  Unlike giant European research projects “we think time is important as money,” he says.  “As [French President Emanuel Macron] says ‘the right tech six months too late is worthless’.”

Loeskrug-Pietri expressed frustration with “spray and pray” approaches at both the national and European level and the time-consuming and complicated process of calls for proposals from governments. “ During the 18 months it takes to do a call for proposals the tech will change twice,” he says. “We need to accelerate our efforts and determine priorities.”

The good news, says Loeskrug-Pietri, is that in the tech sector “the cards are shuffled all the time.” The winners today won’t necessarily be winners tomorrow. Europe has a chance to become a global leader in what’s next in tech, he says, but it will take “the political will to shake things up instead of allowing others to shake us.”

Some of the biggest banks on Wall Street are backing a new syndicated loan platform, called Versana, that is aiming to bring transparency, efficiency and velocity to the $5 trillion market. Founding members JP Morgan, Bank of America, Citi and Credit Suisse say the platform should launch later this year. The syndicated loan market is expected to see significant growth, thanks to rising inflation. But, says Versana, the fragmented and inefficient nature of the current market ecosystem – settlement times average more than 20 days – often results in frustration among participants, significant additional costs and operational challenges. The new venture aims to address this by digitally capturing agent banks’ reference data directly from its source on a real-time basis. In addition to providing greater transparency into loan level details and lender portfolio positions, Versana will streamline workflows and lower costs, says a statement.

Enel X, advanced energy services arm of the Enel Group, has partnered withautomated EV charging solution Ok2Charge to provide co-branded smart electric vehicle charging stations in vacation rental properties around the world. Enel X will provide EV charging stations to Ok2Charge as the first solution designed specifically for the vacation rental market,  allowing guests to charge at the property rather than searching for a charger. The integration of the Ok2Charge smart EV charging platform with major property management systems provides what is being described as an “industry-first” fully automated EV charging solution as a property amenity that can be employed across several properties.

Ford Doubles Down On Electric Push In Europe

U.S. carmaker Ford unveiled plans for seven new electric models in Europe, a battery-assembly site in Germany and a nickel cell manufacturing joint venture in Turkey as part of an aggressive electric vehicle push on the Continent.

After Disney Bob Iger Heads To The Metaverse

Robert Iger, who spent decades helming the Walt Disney company, is backing a startup that celebrities and others are using to create avatars for the much-hyped metaverse.In his first career move since leaving Disney in November, Iger has taken a board seat with Los Angeles-based Genies. He is also an investor in the business, one of five fledgling tech companies he’s recently backed. Genies was founded in 2017 by Akash Nigam, a 29-year-old entrepreneur. The company, which has raised $100 million in funding and employs more than 100 people, offers tools for making virtual characters, clothing and accessories backed by nonfungible tokens. NFTs are considered an integral part of what many see as the next big wave of tech innovation dubbed Web 3.0.

SoftBank Group Corp-backed food service robot startup Bear Robotics raised $81 million. Bear Robotics has shipped more than 5,000 of its Servi food service robots, which carry food and drink between kitchen and tables on layers of trays, and partnered with industry players such as Denny’s, Chili’s and Pepsi. The California-based startup aims to expand beyond its home market and Japan and South Korea, where it has partnered with SoftBank and KT respectively, into Europe and Southeast Asia amid industry labor shortages.

Airbus Rumored To Be Interested In Taking Over Atos’ Cybersecurity Business

European aero and defence conglomerate Airbus  is interested in taking over the cybersecurity business of French software company Atos, France’s BFM TV said on Thursday, citing sources with knowledge of the matter.

Vence, a U.S. startup that offers ‘virtual fencing’ for ranchers using regenerative ag practices, has secured funding from the venture arms of two major corporates: Merck and Shell. Launched in 2016, Vence fits wearable collars to cattle to help ranchers rotationally graze their herds without investing in physical fences – a major cost component for livestock farmers looking to transition to regenerative agriculture.Rotational grazing – or holistic planned grazing – attempts to mimic the natural movement of herds across land whereby they frequently occupy and vacate new pasture, fertilizing and promoting grass growth on the ground they’ve just left and not over-grazing it. Research and real-life examples have shown these methods are able to regenerate grasslands, encourage the development of high-quality pasture, and sequester carbon from the atmosphere.