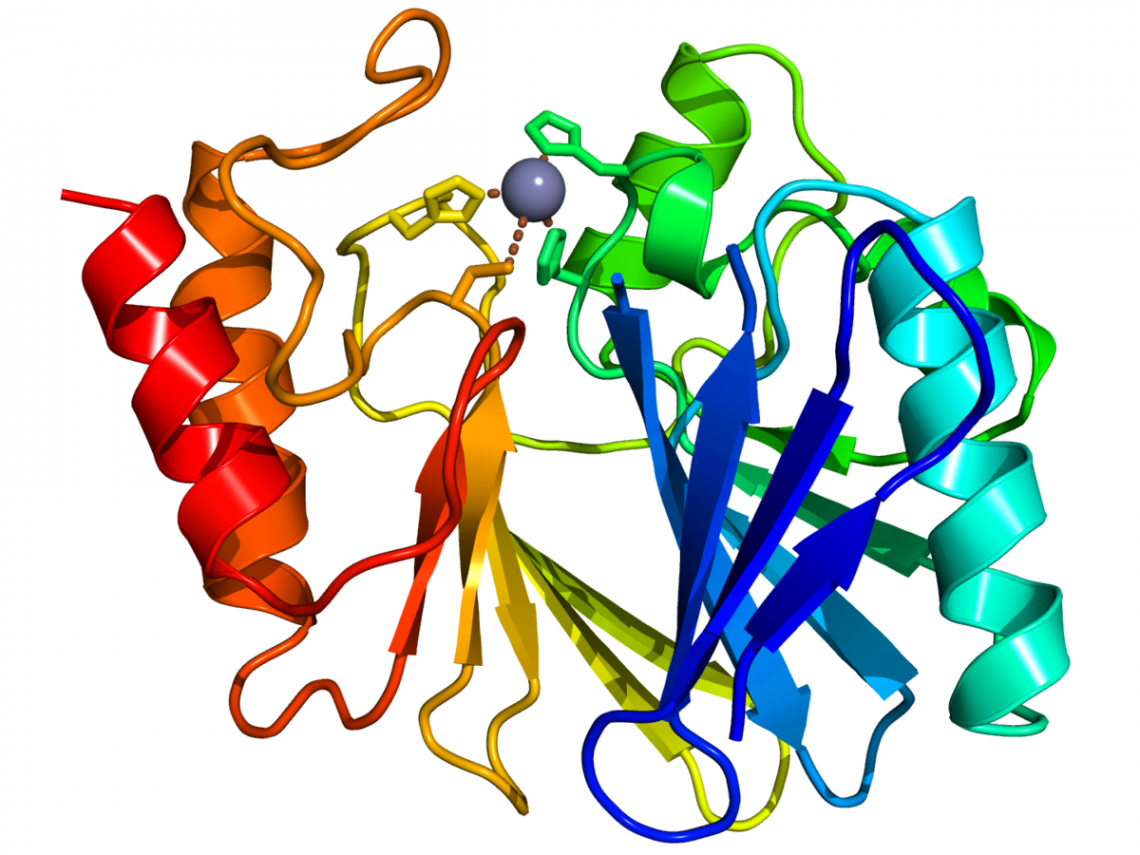 DeepMind, the UK-based AI company owned by Alphabet, has said it can predict the structure of proteins, a breakthrough that could dramatically speed up the discovery of new drugs.

Figuring out what shapes proteins fold into has been  a grand challenge in biology for the past 50 years. DeepMind’s program, called AlphaFold, appears to have cracked it, outperforming around 100 other teams in a biennial protein-structure prediction challenge called CASP, short for Critical Assessment of Structure Prediction. The results were announced on November 30.

“It’s a game changer,” Andrei Lupas, an evolutionary biologist at the Max Planck Institute for Developmental Biology in Tübingen, Germany, who assessed the performance of different teams in CASP, told Nature Magazine. Nature reported that AlphaFold has already helped Lupas find the structure of a protein that has vexed his lab for a decade, and he expects it will alter how he works and the questions he tackles. “This will change medicine,” Lupas was quoted as saying. “ It will change research. It will change bioengineering. It will change everything.”.

Big pharma will have to scramble to keep up. A Financial Times article notes how pharma companies are increasing their own investments in AI. UK-based GSK recently set up an AI lab in London’s King’s Cross. It, along with AstraZeneca and others, is partnering with Nvidia, which is in the process of building the UK’s most powerful supercomputer to do drugs research. Partnerships with AI start-ups have multiplied. This month Hong Kong-based Insilico Medicine inked a drug discovery deal with Janssen. Bayer recently backed US-based Recursion Pharmaceuticals. Bristol-Myers Squibb collaborates with UK-based Exscientia, as does AstraZeneca with UK-based BenevolentAI. Last year, Eli Lilly agreed to collaborate with California-based Atomwise, paying $1 million for each AI-discovered drug.

Sceptics point out that AI has a history of over-promising. It did not, for instance, make as much difference as initially hoped in tackling the pandemic, notes the FT article.

Still, the scientific community as well as DeepMind say they are encouraged by this latest breakthrough. “As well as accelerating understanding of known diseases, we’re excited about the potential for these techniques to explore the hundreds of millions of proteins we don’t currently have models for – a vast terrain of unknown biology,” says a DeepMind blog post.  “Among the undetermined proteins may be some with new and exciting functions and – just as a telescope helps us see deeper into the unknown universe – techniques like AlphaFold may help us find them.”

Some of the models incorporated in solving protein folding were graph-based neural networks, according to the DeepMind blogpost. It explains that a folded protein can be thought of as a “spatial graph”, where residues are the nodes and edges connect the residues in close proximity. This graph is important for understanding the physical interactions within proteins, as well as their evolutionary history. For the latest version of AlphaFold DeepMind said it created an attention-based neural network system, trained end-to-end, that attempts to interpret the structure of this graph, while reasoning over the implicit graph that it’s building. It uses evolutionarily related sequences, multiple sequence alignment, and a representation of amino acid residue pairs to refine this graph.

There’s still much to learn, acknowledges DeepMind, including how best to use  scientific discoveries enabled by AlphaFold in the development of new medicines, ways to manage the environment, and more. “For all of us working on computational and machine learning methods in science, systems like AlphaFold demonstrate the stunning potential for AI as a tool to aid fundamental discovery,” says the DeepMind blog. The progress on protein  folding “gives us further confidence that AI will become one of humanity’s most useful tools in expanding the frontiers of scientific knowledge, and we’re looking forward to the many years of hard work and discovery ahead,” says the blog post.

Eat Just, a California-based maker of meat and egg substitutes, has been approved to sell its laboratory-created chicken in Singapore, which becomes the first government to allow the sale of cultured meat. The product, created from animal cells without the slaughter of any chickens, will debut in Singapore under the GOOD Meat brand as a chicken bite with breading and seasoning in a single restaurant. Eat Just is initially working with local manufacturer the Food Innovation and Resource Centre to make the cultured chicken. Additionally, the company is buying more equipment to expand sales to other restaurants – and eventually grocery stores.

Stripe has brought in several big name banks to back its new banking-as-a-service API that lets online businesses embed financial services in their platforms. Stripe Treasury promises to make it easy for firms to send, receive and store funds, slashing the red tape associated with opening business bank accounts.

Facebook’s Libra Rebrands As Diem In Preparation For 2021 Launch

The current iteration of the project involves the issue of a single stablecoin pegged to the US dollar, a significant scaling back from recently revised plans to issue a series of stablecoins backed by individual traditional currencies, as well as a token based on the currency-pegged stablecoins. The Libra Association has also been recruiting heavily from within the banking sector, hiring senior staff from the likes of HSBC and Credit Suisse to guide operational preparedness and corporate governance.

Banks Will Adopt Google Pay in 2021
Next year, users will be able to open and manage a mobile bank account directly from the Google Pay app, starting with Citibank and 10 other banks and credit unions in the US. The banks will maintain the accounts, while Google Pay will act as the “front end” for accessing and managing them. That means the user experience will essentially be owned — and branded — by Google. Customer accounts will keep the branding of the bank, but the opportunities for differentiation seem minimal.

PhonePe, a digital wallet and online payment platform, which  has more than 100 million monthly active users, just raised $700 million and is asserting its independence from the Flipkart Group. India’s digital payments market, expected to more than double in size to $135 billion in 2023 from 2019 levels, has also attracted the likes of Amazon and Facebook , which have come up with their own systems to woo users. Analysts say the firm could look to expand outside India

Germany’s Solaris Bank Shifts Its Entire Operation Into The Cloud

Digital banking platform Solarisbank will enter a string of new European markets next year, as it became the first German bank to shift its entire operation into the cloud. The Berlin-based startup operates a so-called ‘banking as a service’ model, enabling partners like South Korea’s Samsung Electronics to offer branded accounts and financial products to their customers.

Amazon has added 427,300 new employees in the past 10 months, bringing the number of people employed globally to 1.2 million. The story outlines how Amazon has embarked on an extraordinary hiring binge this year, adding an average of 1,400 new workers a day and solidifying its power as online shopping soars during the corona virus pandemic.

Louis Vuitton LVMH is set to rejig the team that oversees its online strategy after Ian Rogers, recruited from Apple as the group’s digital chief in 2015, left to join Ledger, a French start-up focused on cryptocurrencies.

Hydrogen Is A Trillion Dollar Bet On The Future

If proposals to build a new industry producing so-called green hydrogen succeed, we may have the final piece of the puzzle to prevent devastating climate change. If they fail, we may be about to spend hundreds of billions of dollars on a white elephant.That’s why there’s both excitement and trepidation around the run of dramatic recent hydrogen announcements from Europe, Australia and Chile.

Personal information gathered by live-streaming and short video-sharing services will be strictly limited, according to new rules introduced by Beijing, signalling the Chinese government’s determination to clean up unauthorized data collection by Internet platforms.

The Latest On COVID Vaccines

The United Kingdom became the first Western nation to approve the Pfizer/BioNTech Covid-19 vaccine, a landmark moment in the coronavirus pandemic that paves the way for the first doses to be rolled out across the country next week. Meanwhile, In the coming months, China is preparing to send hundreds of millions of doses of coronavirus vaccines to countries that have conducted last-stage trials for its leading candidates. Chinese leaders have also promised a growing list of developing countries priority access to its successful vaccines. In related news, Alibaba’s logistics arm Cainiao announced that it has struck a partnership with Ethiopian Airlines to introduce a cold chain capable of transporting temperature-sensitive medicines from China to the rest of the world. The air freight will depart from Shenzhen Airport, which Alibaba says houses China’s first cross-border medical cold chain facility, twice a week to countries via Dubai and Addis Ababa.

AutoX, a four-year-old startup backed by Alibaba, MediaTek and Shanghai Motors, is deploying a fleet of 25 unmanned vehicles in downtown Shenzhen, marking the first time any autonomous driving car in China tests on public roads without safety drivers or remote operators.

Goldman Sachs, the world’s top mergers advisor, is among investment banks using drone technology to give its clients a bird’s-eye view of the companies they are bidding on in M & A deals.