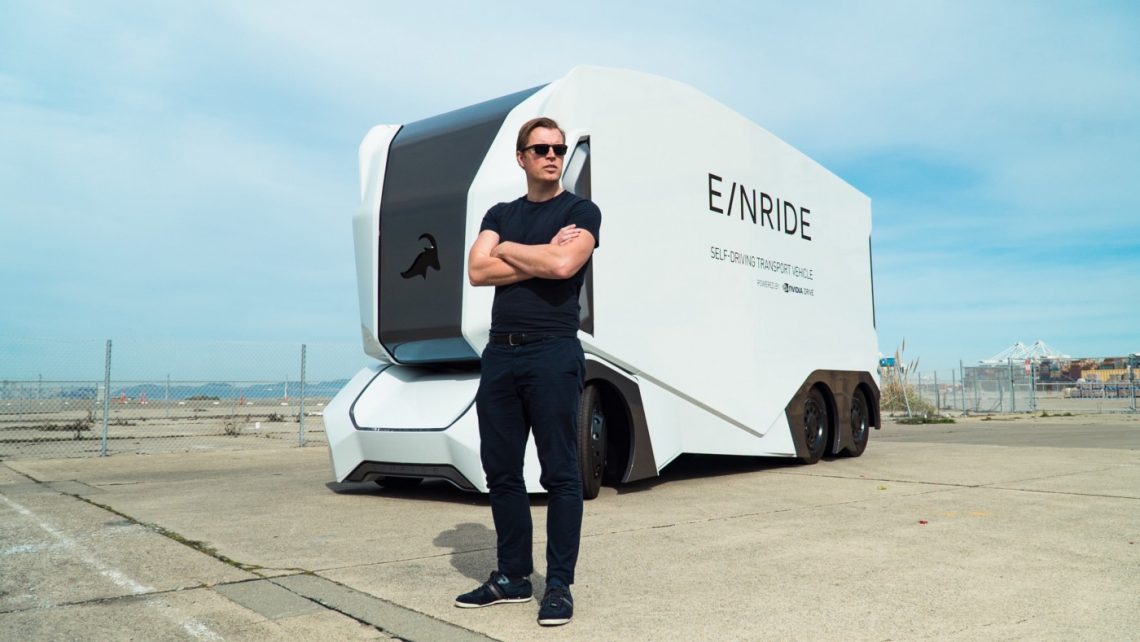 Scale-Up Europe, an initiative of French President Emmanuel Macron to help turn European startups into future global tech leaders, kicked off on March 4.  The initiative focuses on four key drivers: startup-corporate collaboration, deep tech, talent and investment. The movement gathers a select group of 150+ of Europe’s leading tech founders, investors, researchers, corporates, executives and government officials into an ecosystem working on the same goal: accelerate the rise of global tech leaders born in Europe to help the Continent be competitive and ensure its technological sovereignty. (The Innovator’s Jennifer L. Schenker is a Scale Up Europe ecosystem partner.)  Together, the group will define an actionable strategy and roadmap to be presented to European heads of state later this year on scaling the tech ecosystem to the next level.

For Robert Falck, CEO and co-founder of Sweden’s Einride, a tech start-up that developing a sustainable, intelligent road freight system based on all-electric, autonomous trucks, the drive for change can’t come fast enough. In automotive it “may already be too late,” he says. He predicts that the U.S. may “again lead this technology revolution.”

A serial entrepreneur who previously built three other startups, Falck, who holds a B.Sc. and M.Sc. in Mechanical Engineering, a B.Sc. in Economics and finance, and a B.Sc. in business, quit his position as global director of manufacturing engineering assembly at Volvo GTO Powertrain, to launch a European electric and autonomous freight transport company. “The European [auto] industry wasn’t changing fast enough,” he says. “If you want things to change you have to do it from the outside. The role of an entrepreneur is to offer an alternative vision of what a possible future could look like.”

Falck teamed up with co-founders Linnea Kornehed and Filip Lilja and investors quickly bought into the company’s vision. Einride has raised €40 million – none of it from the Continent’s auto makers and little of it from European investors. Like many scale-ups in Europe, Einride is primarily funded by U.S. investors. “You can’t bootstrap if you want to scale-up technology deployment,” says Falck. Trouble is U.S. companies raise 10 to 20 times as much money by the time they reach Einride’s stage of development. “So, to make it you need to be 20 to 30 times as good,” he says.

Although the company, a member of the World Economic Forum’s Global Innovators community, says its autonomous and electric fleet transport solution has some key differentiators, Einride is facing fierce international competition. Falck points to a map of the world that highlights autonomous freight startups in North America and China. Einride is the sole pin on the map in Continental Europe.

“Overall, when it comes to partnerships, ecosystems and customers everyone [outside of Europe] is much more eager to drive the change,” says Falck.

“Software-wise the U.S. started 15 years ago. Battery-wise Asia, China and the U.S. completely dominate and China has the majority of all the minerals required for batteries.”

Europe “can still be competitive but we need to be blunt about the way things are,” Falck says. “We are failing to recognize the challenges we are facing.”

That is set to change if the people behind Scale-Up Europe prevail. At the March 4 kick-off event for Scale-Up Europe, Nicolas Brien, President of the European Startup Network and CEO of France Digitale, along with some of the region’s brightest tech stars – including Atomico Ventures Niklas Zennstrom, a co-founder of Skype, and Team Europe’s Lucasz Gadowski, a serial entrepreneur and investor, openly discussed the challenges, including closing the funding gap for scale-ups and boosting the development of deep tech.

Europe’s deep tech companies – which include those focused on artificial intelligence, robotics, blockchain, advanced material science, photonics and electronics, biotech and quantum computing, rather than new business models or services – are worth a combined €700 billion today, according to a report compiled by Dealroom.eu.  European success stories include DarkTrace, UiPath, Babylon, Lilium, Graphcore, Improbable, Celonis and CMR. Some deep tech companies have their roots in academia and drew early support from government grants. For example, BioNTech, the inventor of the first widely authorized COVID vaccine, which is now valued at $22 billion, was founded as a spin-out from Germany’s Mainz University and benefited from EU grants.

Yet there’s a lot more potential to be unlocked. Johanna Michielin, CEO of CNRS Innovation at the French National Center for Scientific Research, a speaker at the Scale Up Europe event, stressed the importance of deep tech in helping Europe compete globally and to developing efficient ways to tackle tough problems such as climate change and the current pandemic. Fundamental research can be turned into breakthrough innovation but getting there is long and uncertain, she says. “The main priority should be to address funding our research at a level to address those challenges. In 2010 the EU agreed to set aside 3% of GDP for research and we are still not there.”

“There is a real opportunity to create the tech giants we are looking for in Europe but to do that we need corporates,” said Nussenbaum.  “If had more collaborations between founders of startups and corporates international expansions would be much faster.”

Speaker Belen Moscoso del Prado, Chief Digital Officer at French food services and facilities management company Sodexo, noted the disparate efforts to promote the tech sector at local levels in Europe. “If we work together, we can make an exponential push,” she says.

The formation of Scale-Up Europe is a start. Now the initiative has to prove that it can be a real engine of change.

Google teams up with Allianz, Munich Re to insure its cloud users

Google is teaming up with two global insurers to cover cyber breaches and related risks for businesses that use its cloud services, the first time a major provider has opened up such insurance to its clients, the companies said. Major insurers have been treading carefully on cyber risks for years, but the tie-up between Google, Allianz and Munich Re gives the insurers special access to data to see what controls are in place at client firms to help them price the risk.

A China-linked cyber-espionage group has been remotely plundering email inboxes using freshly discovered flaws in Microsoft mail server software, the company and outside researchers said on Tuesday – an example of how commonly used programs can be exploited to cast a wide net online.

Six major utilities unveiled a plan on Tuesday to add electric vehicle fast chargers to connect major highway systems across United States, as they look to cater to the burgeoning electric vehicle market.

Volvo’s entire car lineup will be fully electric by 2030, the Chinese-owned company said on Tuesday, joining a growing number of automakers planning to phase out fossil-fuel engines by the end of this decade.

Intel’s Jerusalem-based subsidiary Mobileye announced a new partnership with two French firms to jointly develop and deploy autonomous shuttles for public transportation in Europe in about two years.Transdev Autonomous Transport System, part of Transdev Group dedicated to autonomous mobility solutions, and mobility solutions manufacturer Lohr Group formed a strategic collaboration with Mobileye to integrate its autonomous vehicle technology into the i-Cristal electric shuttle, made by Lohr Group, to roll out public transportation services powered by fleets starting in Europe, and then globally.

Honda launches Legend, a $102,000 luxury sedan that promises Level 3 autonomy. The vehicle is capable of driving itself under certain conditions, but it will require a human driver behind the wheel who is ready to take over at a moment’s notice

On The Moscow Metro Your Face Is Your Ticket To Ride

Moscow is introducing facial recognition technology that will automatically charge metro passengers for journeys as they approach ticket offices. The groundbreaking technology is part of a vast city-wide surveillance system that has sparked privacy concerns, as well as fears that it is being used to crack down on opposition protesters.

Robotics Division Of Uber’s Postmates Spins Out Into New Company

The robotics unit of Postmates, a delivery startup that ride-hailing firm Uber Technologies acquired last year, has spun off into a new company called Serve Robotics, the company said on Tuesday.

Instacart, Crisp, Rohlik, Flink. Online Grocery Gets Funding In The U.S. And Europe

Apparently investors have been shopping for online grocery startups, as there was a spate of funding news in the sector across North America and Europe over the past week. The pandemic has pushed people into record amounts of online grocery shopping, creating new habits.

Google Plans To Stop Selling Ads Based On Individuals’ Browsing

Google plans to stop selling ads based on individuals’ browsing across multiple websites.The decision, coming from the world’s biggest digital advertising company, could help push the industry away from the use of such individualized tracking, which has come under increasing criticism from privacy advocates and faces scrutiny from regulators.

Payments firm Square agreed on March 4 to buy a majority stake in rapper Jay-Z’s Tidal music streaming service for $297 million in a deal that could popularize blockchain or other new approaches to storing and buying online media.