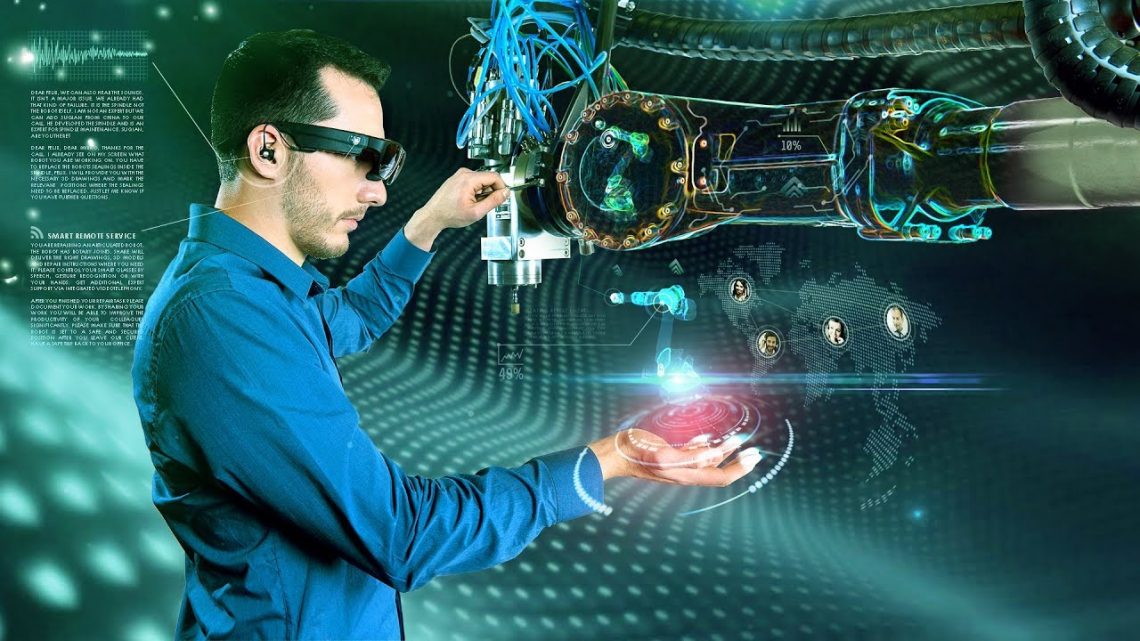 Sending technicians to fix customers’ industrial machines on-site is inefficient and expensive and in the time of COVID it is difficult to do it safely. So, European companies are increasingly turning to a video-based augmented reality solution to let experts and technicians provide service and maintenance to machinery, without having to be physically present.

The AR software platform, which was developed by German scaleup Oculavis, is helping customers like ABB, Bosch, Siemens, Trumpf and Linde integrate new types of digital tools and, in some cases, add new revenue streams. In addition to end-customer service in mechanical engineering, applications include long-distance support for production sites in the Far East or supplier audits in the automotive industry.

Oculavis is just one example of how deep tech startups and scaleups are helping Europe’s corporate transform their businesses for the digital age- a task that is not only crucial for the future of these businesses but to Europe’s ability to compete.

The scale-up’s trajectory neatly illustrates just how much the European landscape has evolved.

Europe always produced great science and technology, but commercializing research projects has been slow compared to international competition, in part due to weak connections between universities and corporates. That’s not all. There was not enough funding available to support capital intensive university spin-offs and deep tech startups. These factors, combined with big corporates’ aversion to risk-taking and working with entrepreneurs, all but ensured that many projects would never get off the ground.

Take the case of Olli Martikainen, a Finn, who developed a router – hardware that directs streams of data from computer to another -back in 1982 at VTT, a research institute in Espoo, Finland. The Finnish companies financing the research, including Nokia, did not see the potential, so the project was dropped in 1986, shortly before an American startup called Cisco commercialized similar technology. Cisco went on to become a multi-billion-dollar company while Martikainen’s prototype gathered dust in a university display.

Fast forward to 2021. Europe’s deep tech companies – which include those focused on artificial intelligence, robotics, blockchain, advanced material science, photonics and electronics, biotech and quantum computing, rather than new business models or services – are worth a combined €700 billion today, according to a report compiled by Dealroom.eu.  European success stories include DarkTrace, UiPath, Babylon, Lilium, Graphcore, Improbable, Celonis and CMR. Some deep tech companies have their roots in academia and drew early support from government grants. For example, BioNTech, the inventor of the first widely authorized COVID vaccine, which is now valued at $22 billion, was founded as a spin-out from Germany’s Mainz University and benefited from EU grants.

Yet there’s a lot more potential to be unlocked. The current state of the European deep tech startup ecosystem and a look into possible future developments will be the topic of a February 24 virtual tech talk organized by German university RWTH Aachen and European venture capital firm Atomico and supported by law firm Orrick. The tech talk, which will be moderated by The Innovator, is one of a series of events planned around the State of European Tech 2020 report produced by Atomico with support from Orrick.

Oculavis is riding Europe’s burgeoning deep tech wave. Its three founders studied industrial engineering and computer science at RWTH Aachen university, a leading European technical university that has morphed into a lively hub for tech entrepreneurs with 400 corporate partners. After earning PhDs at the Fraunhofer Institute, a German research organization with 72 institutes spread throughout Germany, the three were incubated by the RWTH Startup Center in the start-up phase of their venture, which was launched in 2016. The scale-up is now an active part of RWTH’s alumni program, mentoring the teams in the RWTH Incubation Program.

The Oculavis team, which received €2.5M in 2019 from the European Commission, has won numerous awards: German Founders Award 2018, Winner of the EIT Digital Challenge 2019, Winner of the NRW Founders Award 2020 and was recently named #1 of the Top 50 Startups in Germany by the German paper Frankfurter Allgemeine Zeitung.  Oculavis has not yet needed to raise venture capital. It has bootstrapped by co-innovating with its corporate clients. It currently employs 60 people and reported revenues of $5.5 million in 2020.

The founders ‘aha’ moment was when they realized that breakdowns of heavy machinery represented a huge headache and expense for big companies, says co-founder Martin Plutz. Oculavis’ technology– which is device agnostic – helps make up for skills shortages or time differences. If, for example, machinery in one part of the world breaks down in the middle of the night Central European time, clients can opt to use a 3D overlap on top of their machinery with digital instructions to try and repair it themselves. If that doesn’t work, they can interact remotely with a technician during working hours. The solution is device agnostic. It works with smart glasses or tablet devices. The only time Oculavis’ technology solution has failed has been due to a clients’ inability to adopt the organizational changes that underpin the move to digital solutions, says Plutz.

The co-development of Oculavis’ technology with industry illustrates how Europe’s traditional companies are working more effectively with startups and universities. Eight years ago Aachen University invited large corporates to do research projects on tough problems that require multi-disciplinary research. Some 400 companies have signed up, says Malte Brettel, RWTH Aachen’s Vice Rector for Industry and Business Relations and Managing Director of RWTH Innovation.  One of them is Siemens, a largest industrial manufacturing company. The German conglomerate asked the university to help the company be less dependent on China for rare earth elements, which are used by industry as catalysts, phosphors, and polishing compounds. China is responsible for most of the world’s rare earth production and holds much of the rare earth reserve base. The university asked groups of researchers specializing in mining, recycling and material science to study alternative sourcing and came up with an innovative solution, which has not been made public, says Brettel.

The university separately spins out some 75 deep tech spin-offs per year that target big corporates as customers. One, Accure, is applying data analytics to understand and improve the safety, reliability and lifetime of batteries. Accure’s cloud diagnostics tool has been applied to more than 200,000 battery modules from suppliers like Panasonic, Samsung SDI, LG Chem, Sanyo and Sony, resulting, the company says, in 15%-20% increase in lifetime and a reduced CO2 footprint. Another Aachen university spinout, FibreCoat, has created an innovate material for shielding electromagnetic radiation, with promised savings of up to 90%. Due to this enormous cost advantage, FibreCoat offers a platform for completely new applications that are only made economically viable by the new material. In January 2021, the first product of this technology was launched on the market: aluminum-coated basalt fibers. These fibers achieve the same technical performance as competing products but are priced at €30 – €80 /kg, which is significantly lower than the average market price of €600/kg. Currently, the material is being tested by more than 20 large corporate customers in pilot applications.

These two companies are typical of the university’s deep tech spin-offs, says Benedikt Wiechers, head of RWTH’s incubation program. Both were founded by former PhD Students at RWTH doing in-depth research on their products as part of larger research efforts; are tackling large, societal problems with focus on the B2B market; and are working with top corporations as clients.

The Next Wave: Helping Europe Make A Quantum Leap

VTT Technical Research Centre of Finland may have lost out on routers but it looks poised to help lead the way in quantum computing, a rapidly developing technology that manipulates quantum circuits to perform immensely complex calculations for things like personalized medicine and autonomous vehicles that today’s computers can’t handle.

IQM, a spin-out from VTT and Finland’s Aalto University, aims to not only speed up the development of quantum computing but also to ensure that Europe has a competitive offer.

“It is very important for Europe to be at the forefront of quantum computing as this is a technology that will change the world,” IQM CEO Jan Goetz, a quantum physicist, said in an interview with The Innovator last year. (The Innovator named IQM a  startup-of-the week in 2020)

The company, an emerging hardware leader in quantum computing, is a member of a consortium involving startups, industry, research centers, supercomputing centers, and academia coming together to accelerate Europe ́s efforts in quantum computing.  The consortium announced February 15 that it had raised $12.4 million in funding from the the German Ministry of Education and Research.

In addition to IQM, which will lead the project as a system integrator, the consortium includes Austrian startup ParityQC, Infineon Technologies, the Forschungszentrum Jülich research center, Leibniz Supercomputing Centre, and Freie Universität Berlin.

Germany announced  in June 2020 that it will invest € 2 billion funding into quantum programs  worldwide, making it one of the largest efforts in Europe and worldwide.

This latest program, led by IQM, will focus on application-specific quantum processors. The digital-analog concept used to operate the processors is expected to lay the foundation for commercially viable quantum computers. The project, which will run for four years and aims to develop a 54-qubit quantum processor,  is intended to support the European FET Flagship project EU OpenSuperQ, announced in 2018 which  has designing, building, and operating a quantum information processing system of up to 100 qubits as its goal.

“We must act now if we in Germany and Europe do not want to become solely dependent on American or Asian know-how in this future technology area,” Sebastian Luber, Senior Director Technology & Innovation, Infineon Technologies, said in a prepared statement connected with the launch of the new consortium.

In its January report “2021: The Year of Deep Tech” Dealroom.eu argues that the commercial gap with China and the U.S. can be closed by fostering an entrepreneurial culture on European campuses, training first-time academic entrepreneurs and tech transfer officers, and offering spinouts simpler and faster deals. Europe is well on its way, says Atomico’s Siraj Khaliq, a scheduled speaker on a panel in the February 24 virtual tech talk who specializes in investing in deep tech. If corporates, entrepreneurs, investors and academia in Europe can team effectively they will not only continue to strengthen a now-flourishing deep tech ecosystem. They will also bolster Europe’s largest companies digital transformation and boost the chances of using technology to help solve some of the world’s most challenging problems, he says.