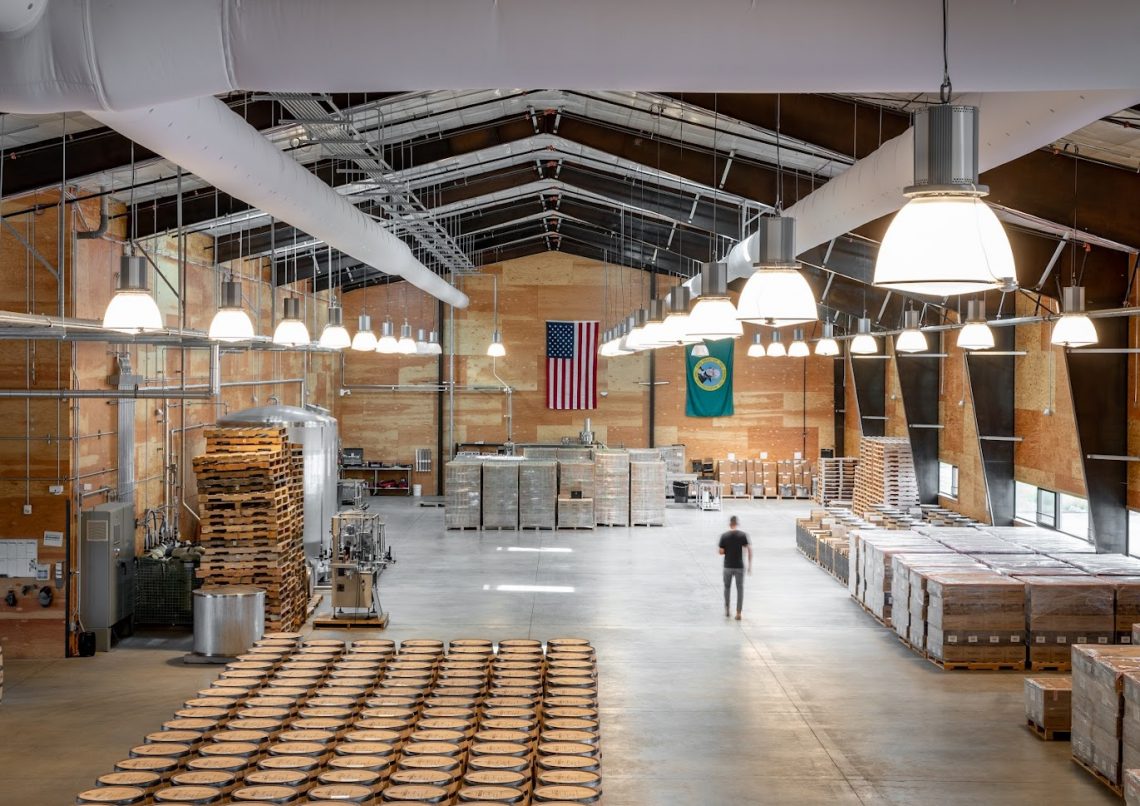 Wood has always played an important role in the production of bourbon, but Woodinville Whiskey is taking it to a whole new level. The U.S. company’s newly completed warehouse (pictured here) – one of six 25,000 square-foot structures that will house its small-batch bottling, barrelling, and ageing facilities in a rural part of Washington state -is being built with an eco-friendly modified wood that serves as an alternative to building materials with a much higher carbon footprint.

Produced by Oslo-based Kebony, a World Economic Forum Technology Pioneer, the modified wood has also been used to build hotels, apartment buildings, a theater, and family homes in Europe and the United States over the past 36 months. It’s part of a trend. Wood not only reduces the amount of Co2 used in the building process; it serves as a carbon sink, storing the Co2 taken from the air by trees that are harvested and used as engineered timber.

The race to Net Zero is putting pressure on all companies to reduce their carbon footprint and is changing the way buildings are constructed and renovated, says Norman Willemsen, CEO of Kebony, which describes itself as an “environmentally friendly wood modification technology company.”

“Kebony is very much in demand as an alternative to products like concrete, steel and tropical wood,” he says. “We provide a safer, better, greener construction material.”

“Our research shows that estimated material emissions per kg CO2/m are, for example, 353 for Kebony Clear versus 1,200 for concrete, 7,500 for clear cut tropical wood and 15,600 for steel, making Kebony the greenest material, “ says Willemsen.

Tropical wood comes from trees that take 80-200 years to grow, and deforestation has become a threat to wildlife and biodiversity. Kebony relies on softwood trees, such as pine, that grow in a shorter time span (about 25-30 years) and are planted to be harvested in Forest Stewardship Council certified forests.

Kebony’s technology uses a patented process that enhances the properties of soft wood with furfuryl alcohol, which is produced from corn and sugarcane crop waste. The process permanently modifies the wood cell walls by forming locked-in furan polymers that increase the dimensional stability, as well as durability and hardness, of the wood, with features that Kebony says are comparable, and in some cases superior, to those of precious tropical hardwoods.

The opportunity is huge, says Willemsen. The European timber market is worth around €3 billion for the residential and non-residential construction industries while the global market for tropical hardwood is worth $20 billion to $30 billion. There are many companies that treat wood to strengthen its properties.  Kebony’s differentiator is that uses a patent-protected bio-based process, he says.

The technology Kebony uses was first developed in 1997. Full scale manufacturing began in 2009. Kebony started to gain traction about three years ago after Willemsen was brought in to run the business and the company raised its first venture capital round, says Antoine Trannoy, a Kebony board member and a partner at Jolt Capital. Jolt Capital and Lightrock led a 2021  €30 million investment into the company. (Previous shareholders Goran, MVP, FPIM, PMV and Investinor joined the 2021 round)

Today Kebony sells its products through distributors in 30 countries. Its material is being used for everything from whiskey barrels, hot tubs, and decks to piers, promenades, roofs, and cladding.

“We believe there is a tremendous opportunity for refurbishment,” says Trannoy. Kebony can be used to improve thermal insulation, weather resistance, and the appearance of existing buildings. The material’s light weight additionally makes it ideal for adding stories to existing buildings in cities.

Production of Kebony’s modified wood takes place in Skien, south of Oslo, and at a facility in Antwerp, Belgium that was built in 2018. “The Belgium facility was built to be scalable and can be expanded and replicated if needed,” Willemsen says.

Norway is becoming a proving ground for timber as a sustainable alternative to concrete and steel in more ways than one. It is also home to the 280-foot-tall Mjøstårnet tower, which was built using a type of engineered wood called cross-laminated timber, or CLT. Part of a larger group of materials known as mass timber, it is produced by gluing strips of laminated wood together at 90-degree angles to one another, before they’re compressed into huge beams or panels under extreme pressure. Other cities are also building wooden towers and the Netherlands has announced plans to build an entire Amsterdam suburb from wood.

“Provided we replace the trees used in construction, we could create a future where cities would become carbon neutral, acting as ‘second forests’ for carbon storage,” Ewald Rametsteiner, Deputy Director, Forestry Division, Food and Agriculture Organization of the United Nations, wrote in a March article that explains howswitching to wood-based products can help combat climate change and achieve the Sustainable Development Goals (SDGs).

Meanwhile researchers are developing other types of organic-derived materials based on everything from algae to hemp that are strong and versatile enough to replace carbon-intensive steel and concrete. To stimulate those efforts, in June, the U.S. Department of Energy announced $39 million in grants for 18 projects working on “technologies that can transform buildings into net carbon storage structures.”

Today companies like Kebony represent only a tiny fraction of the construction market, says Willemsen. He predicts that pressure to meet sustainability goals will accelerate the uptake of greener materials.  “Our aim is to help the world reduce Co2,” he says. “This is a large and growing opportunity.”

To read more of The Innovator’s Profits With A Purpose articles click here.