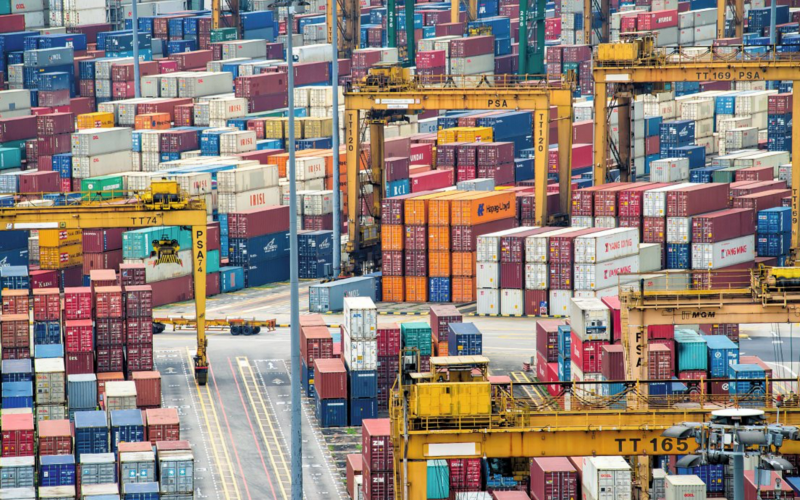 The technology is adding transparency and efficiency to a system that still runs on phone calls and handshakes.

The industries that power the global supply chain have stubbornly resisted radical change for decades despite being plagued by fraud, buried under mountains of paper, and suffering mind-boggling inefficiencies. This conservatism makes their sudden love affair with blockchain technology one of the crypto era’s most surprising twists. IBM and shipping giant Maersk have teamed up to develop an industry-wide blockchain platform they believe can finally modernize an industry that still often runs on phone calls and handshakes. Retailers like Carrefour and Walmart have embraced blockchain as a way to make their supply chains more transparent in order to build more trust with customers. A host of startups have seized on this trend to demonstrate that blockchain is more than just the foundation for cryptocurrency.

The technology serves as an immutable distributed ledger that allows an almost limitless number of participants to record transactions. It is perfect for supply chains because the transactions are transparent to everyone on the platform, allowing for easy verification and a high degree of trust and security. Any change to the record has to have the agreement of all parties. “Global supply chains are some of the most complex, multi-party ecosystems in the economic landscape today,” says Maersk’s Mike White, who heads the TradeLens blockchain project the company is co-developing with IBM. “Blockchain is one of the technologies that really changes the game.” The blockchain revolution is coming just in time for supply chains. A study by Transparency Market Research projects that the value of goods moving across the supply chain will almost double from $8 trillion in 2016 to $15.5 trillion in 2023.

The projected growth is likely to strain the capacity of shippers but building more ships, ports or other infrastructure can be a costly and risky proposition. Blockchain is appealing because it makes existing resources more efficient. Today, a product moving across the globe could involve 200 separate exchanges of data or paperwork and pass through 30 different parties as it moves from factory, to warehouse, to port, to customs, to a ship, and so on. These transfers are still often marked on paper, arranged by phone calls, verified with a handshake, or maybe typed into a spreadsheet. When something gets lost, or broken, or delayed, there is virtually no way for a company or consumer to know why. “We’re trying to address one of the big challenges of the movement of cargo, which is the lack of visibility of a container at any given time,” says Todd Scott, IBM’s vice president of blockchain global trade.

That led to IBM’s official announcement of TradeLens with Maersk earlier this year. Maersk and IBM began exploring development of a blockchain service in 2016 before officially announcing TradeLens in August. The companies say 94 organizations have agreed to participate, including shipping companies, ports, customs agencies, freight forwarders and trucking companies. In some cases, the partners say the shipping time for items was reduced by 40%, while the query time about the location of a cargo item was reduced from 10 steps to one.

“What’s interesting to me is the breadth of participation across all parts of the ecosystem,” says White of Maersk. “It shows me the market is ready, the industry is ready to embrace a solution.”

While TradesLens has gotten the most attention, it’s not the only effort. Last year, a group of logistics veterans founded ShipChain, which is developing a supply chain platform on a type of blockchain technology called Ethereum with a goal of bringing together all links of the supply chain. Scheduled for release later this year, the company’s platform will create smart contracts designed to automate all recordkeeping. This will allow users to arrange payments once a contract is fulfilled and verified. To fund its development ShipChain raised $30 million earlier this year through an initial coin offering (ICO), the cryptocurrency world’s rough equivalent to an initial public offering.

London-based Provenance is taking a different tack. The company grew out of research Jessi Baker conducted for her PhD in computer science. She became one of the first people to use blockchain for the supply chain as part of her research. Since then, Baker has worked with non-profits to develop pilot projects such as a program to verify that fishermen are meeting social sustainability goals when they catch tuna.

In shifting to building a for-profit company, Baker decided to focus on trust between brands and consumers. Provenance offers a platform that blends blockchain, mobile, and social technologies to allow companies to show consumers a product’s entire journey. Such a system can offer proof, for example, that the beef you are eating really comes from Argentina, and not from Scotland, which reported an outbreak of mad cow disease in October. Consumers can contribute comments, reviews, or personal stories that are verified and attached.

The reason companies are becoming Provenance clients is “they want to be trusted by their customers,” says Baker.

Trust is also at the heart of the IBM Food Trust project, another of the tech company’s major blockchain efforts. This was developed in tandem with Walmart, and was motivated by an outbreak of E.coli in prepared lettuce a few years ago. A massive recall was ordered in large part because officials couldn’t determine the origin of the contaminated lettuce or where it was distributed.

With the IBM Food Trust, companies can track every item of food from farm to table. Following another E.coli outbreak in the U.S. lettuce supply this year that is linked to the deaths of five people, Walmart recently told all suppliers of leafy greens they must have blockchain technology in place by next year if they want to continue working with the company. The company said it would offer guidance, resources and training to help suppliers onboard to the IBM Food Trust platform.

French retailer Carrefour announced in October it was joining the IBM Food Trust. Carrefour stated that it will continue to use a blockchain platform it developed itself when dealing with smaller, local suppliers. But it makes sense to join the IBM program to work with bigger, international brands, says Emmanuel Delerm, director of Carrefour’s blockchain program.

Carrefour says it is embracing blockchain to promote trust with end- consumers. “This traceability and this visibility is really a way to say to customers that we really want to share this with you and show we care,” says Delerm.