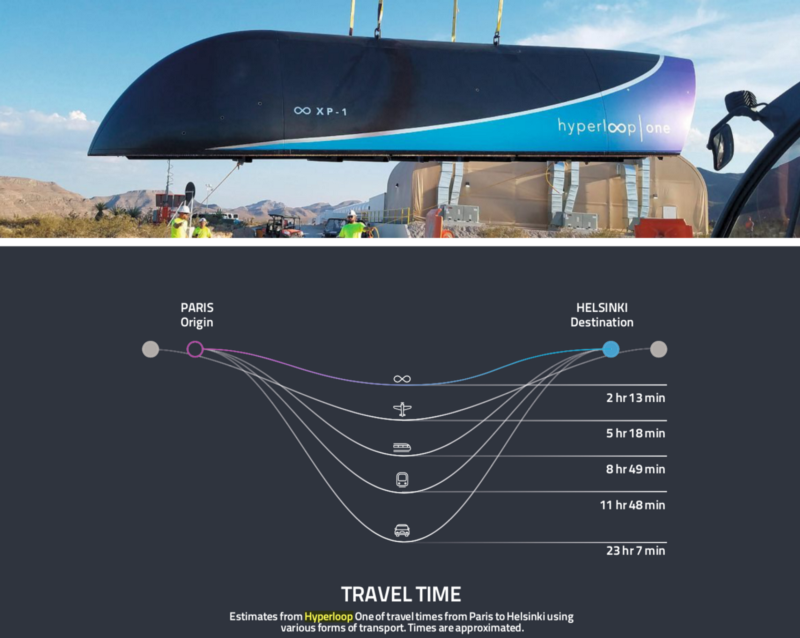 The very high-speed transit system has been called a cross between the Concorde and an air hockey table.

If all works out as planned at some point in the future, in a city somewhere on the globe the first passengers will strap themselves into pods that will float through tubes that have been pumped into a near-vacuum at speeds of up to 760 miles per hour, dramatically reducing inter-city travel time. And the expectation is that the travel will cost the price of an airline ticket or less.

A race is on to see who will be the first to build this transit system, called a hyperloop, and where.The concept behind the hyperloop — travel inside a vacuum tube — has been around for decades. Interest was renewed when billionaire Elon Musk, the entrepreneur behind Tesla Motors and SpaceX, issued a document outlining a suggested design in August 2013. Since then several companies have been founded to commercialize hyperloop services, one called Hyperloop Transportation Technologies and another called Hyperloop One. The latter company recently raised funding from investors that include billionaire Richard Branson, and the project has since changed its name to Virgin Hyperloop One. One of Hyperloop One’s original team members, Brogan BamBrogan, quit and started his own venture called Arrivo. Rather than try and build a rival hyperloop, BamBrogan introduced another type of futuristic transport in November described as an “enclosed, electromagnetic superhighway that uses magnetic levitation to make vehicles float and electric power to move them forward” at 200 miles per hour. It will be built in Denver, Colorado, with the goal of transporting passengers anywhere in the Denver metro area in 20 minutes or less, for the same cost as a toll road.

Meanwhile in July Musk, who has launched a venture called The Boring Company, tweeted that he had “just received verbal [government] approval” to build a new underground hyperloop network that can shuttle commuters between New York City and Washington D.C., about 230 miles apart, in 29 minutes. In a tweet Musk said the new super-fast transportation network will also have stops in Philadelphia and Baltimore, as well as “up to a dozen or more entry/exit elevators in each city.”

A Race to the Finish

In October, Governor Larry Hogan of Maryland tweeted that the state’s Department of Transportation had approved the tunnel. The announcements took people by surprise and raised a number of questions. The development also has sparked speculation that Musk has ambitions to build his own competing hyperloop company.

A flurry of announcements by Hyperloop One and Hyperloop Transportation Technologies about discussions with cities around the world have added to the confusion. Virgin Hyperloop One, which has built a fully operational test track in the Nevada desert, says it has feasibility studies in the U.S., India, the UAE, Canada, Finland and the Netherlands. “The timeline is determined by how fast local governments can work,” the company said in a written reply to questions. “Hyperloop is about connecting people and ultimately it is about how fast governments want to connect their people.” Virgin Hyperloop One says it currently on target for the first operational hyperloop by 2021. Its goal is to be able to provide a service that will operate at 670 mph.

Hyperloop Transportation Technologies, which has 28 patents, is crowdsourcing its research and development from engineers working at places like NASA, Tesla, Boeing and Lockheed Martin as well as the United States’ Lawrence Livermore Lab, which is credited with developing an early levitation system. It has opened offices in Abu Dhabi, Dubai, Toulouse, Slovakia, the UK, India, Indonesia and Spain. It has a joint venture with the South Korean government and in January it announced the signing of an agreement with the city of Toulouse to open a facility for the development and testing of hyperloop-related technologies. As part of this agreement the city is providing a 3,000-square-meter facility along with outdoor terrain at a former military airport base. It has also been given permission to test a two-kilometer hyperloop line inside the airport, its chairman, Bibop Gresta, said in an interview. Virgin Hyperloop One and Hyperloop Transportation Technologies acknowledge that a number of things will need to be put into place before either can launch commercial services.

“We are a new mode of transportation and we have to ensure it’s as safe as other modes of transportation,” Virgin Hyperloop One said in a statement. “Given that it is a new mode we have to make sure it’s not regulated like a plane, train, car, etc. and create new regulations…. similar to creating regulations around autonomous cars.”As for who is going to launch a commercial service first, it is anybody’s guess.Asked if Virgin Hyperloop One considers Musk’s Boring Company to be a competitor, the company responded: “Virgin Hyperloop loves tunnels. If the Boring Company can accelerate tunneling it will ultimately help our company because their system will be great for the last-mile solution that we can seamlessly integrate into our passenger experience.”

Hyperloop Transportation Technologies’ Gresta takes a more circumspect view. “We are in contact (with Musk’s venture) and are monitoring the evolution. Sooner or later we will need to sit down and talk about how do we speed the development. Whatever will be his position I think this could be a really good development. A person like him can make a difference in a market that needs to grow and gain credibility worldwide.”