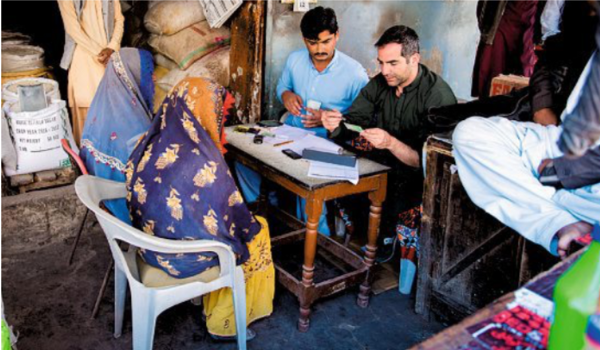 Blockchain’s distributed network of trust is helping step up the fight against hunger.

Blockchain is a way of organizing data through a distributed ledger. This can speed up transactions while lowering the risk of fraud or data mismanagement. The ledger records transactions in a secure manner that cannot be changed. It allows any two parties to transact directly, and removes the need for third-party intermediaries such as banks. Robert Opp, Director of Innovation and Change Management at the UN World Food Program, says he decided to test digital ledger technology after speaking with the finance division overseeing the WFP’s cash transfer programs.

The United Nation’s World Food Program has a $6 billion budget. Its job is to give around 100 million people in 80 countries a year some sort of assistance. In addition to delivering food, the UN agency delivers in-kind emergency relief in places where there are functioning food markets. Cash assistance is loaded on a card, mobile phone or digital voucher.

Some 10,000 refugees in Jordan’s Azraq camp are now able to pay for their food by means of entitlements recorded on the blockchain.

A Scan of their Eye Instead of Cash

In the case of the WFP the cash amount distributed is almost $1 billion. The WFP was transferring huge sums of money around the globe to partner banks, along with a list of those eligible for assistance.

The banks would transfer the funds onto cards or vouchers that those receiving assistance could use to pay retailers. The banks would handle the reconciliation.

Now, “blockchain is replacing the piece that banks would do,” says Opp. Using the blockchain the WTF can avoid bank fees that range between 1% and 3% and the necessity of transferring a list of names to a third party. And, instead of 10,000 payments to the bank on behalf of specific individuals, the organization now deals with only 200 settlements to retailers, he says. After a trial in Pakistan earlier this year WFP rolled the service out to around 10,000 people in a refugee camp in Jordan. The blockchain service is now ramping up to serve hundreds of thousands of people.

Because there is yet no globally recognized digital ID (See the story page 16.), the WFP’s system relies on biometric registration data from the United Nations High Commissioner for Refugees (UNHCR) and uses biometric technology for authentication purposes. Refugees purchase food from local supermarkets in the camp by using a scan of their eye instead of cash, vouchers or e-cards. The pilot aims to create a platform that the wider humanitarian community could use. Depending on the results of the pilot, WFP will look at expanding the use of blockchain technology to areas such as digital identity management and supply-chain operations.

Mobile technology, biometrics and solutions such as blockchain, have the potential to transform the lives of people in need across the world and address the roots of hunger, says Opp. The WFP has opened an innovation accelerator in Munich to work on developing new tools and approaches to eliminate hunger by 2030.

“New business models are needed to address the problems of the poorest people in the world and blockchain can be an enabler,” Opp said.