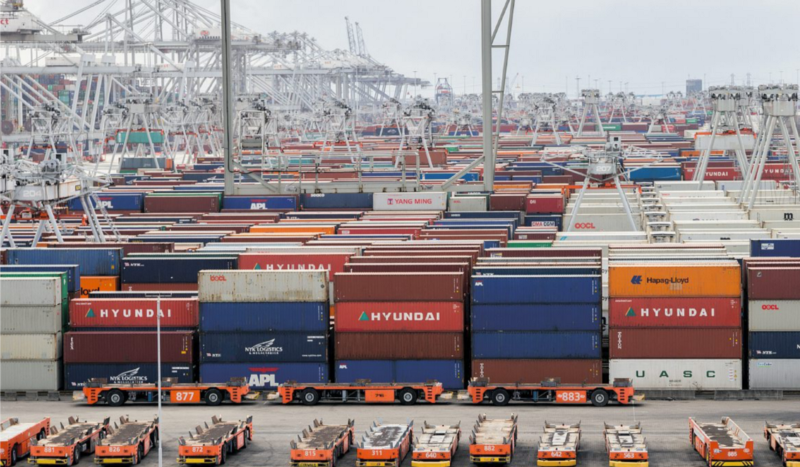 More than seven million container ships move in and out of The Port of Rotterdam annually carrying flowers from Kenya, oranges from California, pineapples from Colombia and a whole array of other merchandise. Europe’s largest port is always bustling because 90% of goods in global trade are carried by the ocean shipping industry each year. It is a highly inefficient process that is ripe for disruption.

Maersk, the world’s largest shipping container company, found that just a simple shipment of refrigerated goods from East Africa to Europe can go through nearly 30 people and organizations, involving more than 200 different interactions and communications. So it is no surprise that Maersk has teamed up with IBM to test how the blockchain, which enables more secure, transparent monitoring of transactions, might streamline the supply chain. It is just one of a number of trials involving blockchain’s use in the supply chain. Supply chains are basically a series of transaction nodes that link to move products from point A to the point-of-sale or final deployment. With blockchain, as products change hands across a supply chain from manufacture to sale, the transactions can be documented in a permanent decentralized record — reducing time delays, added costs, and human errors. Some of the world’s biggest retailers and food companies — including Nestlé, Unilever and Walmart — are now working with IBM to use the blockchain to improve food traceability and transparency in the supply chain. Several blockchain startups are innovating around supply chain in other sectors, notes the research firm CBInsight.

For example, SteelTrace, a Dutch startup, is using the blockchain to automatically trace steel quality from origin to end product. Another startup, Provenance, is building a traceability system for materials and products, enabling businesses to engage consumers at the point of sale with information gathered collaboratively from suppliers all along the supply chain, permitting it to substantiate product claims with trustworthy, real-time data. Others startups targeting this space include Hijro, which offers an alternative platform for lending into global supply chains, and Skuchain, which builds blockchain-based products for the business-to-business trade and supply- chain finance market.

Trade finance is also being moved onto the blockchain. The trade finance environment involves export and import, bank credit and managing the whole supply chain. “The financial payment is not linked to the supply chain so there is a paper version control issue and it adds significant cost because it is manual,” says the blockchain specialist Oliver T. Bussman, a former CIO at UBS.

Another issue is that the payment stream is not linked to the supply chain from a time-to-delivery point of view. With the blockchain, smart contracts can be issued between all the involved parties, delivery can be confirmed and the payment will automatically be executed. Cost efficiency savings are estimated to be between $14 billion to $16 billion, says Bussmann. “This is an example of how blockchain allows for real-time integration not only of the banking industry but to team up with peers and non-banks and move that onto a platform to enable simplified real-time business,” he says. A group of banks, including Deutsche Bank and HSBC, have formed Digital Trade Chain, a project to build a blockchain-powered cross-border trade finance platform for small and medium-sized companies in Europe.

The consortium started in January 2017 with seven European banks and is expected to grow to include additional banks from other countries as well as trading partners such as shippers, freight forwarders and credit agencies. Bank of Montreal, Caixabank and Erste Group recently announced that they are joining a blockchain-based trade platform started by UBS and IBM. The platform, called Batavia, would help banks and their clients automate the trade finance process. Among other things, Batavia will allow parties to track a transaction from when a shipment leaves a port to when it reaches its destination.