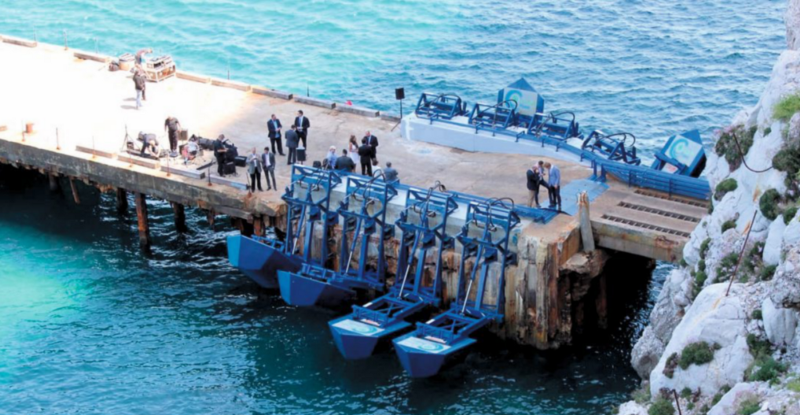 Wave energy has potential as an alternative energy source, but companies have had a tough time trying to commercialize the technology. It costs too much to set up, no stationary equipment has been developed to reliably deal with waves as high as 20 meters or more and environmentalists have objected to the presence of massive new structures on the ocean floor. To make matters worse, insurance companies have refused to underwrite projects due to the high risks. None of that fazed Inna Braverman, who majored in English and political science at the University of Haifa in Israel before co-founding Tel Aviv-based Eco Wave Power.

She and her co-founder, David Leb, believe they have cracked the problems that have held back the sector. Rather than tethering multi-million-dollar edifices to the ocean floor, Eco Wave Power uses buoys that are attached to any type of structure, such as breakwaters, piers or jetties, to produce waves when the buoys move up and down, driving a hydraulic piston to deliver high kinetic pressure to an onshore generator to create electricity. “Our floaters produce electricity at prices that are lower than wind and the same as solar,” says Braverman.

The company has projects and project orders in the UK, China, Mexico, Chile, Israel and Gibraltar. “Most of the wave-energy companies are managed and owned by engineers and scientists,” says Braverman. “That’s a good thing because they have a lot of knowledge,” she adds, “but it is also a bad thing. The main difference with our project is thinking outside of the box.” Braverman, a speaker at Slush, a technology conference in Helsinki on Nov. 29 and 30, is an example of how non-experts from outside particular industries make waves by coming up with solutions that others think impossible. Successful moon shots in the energy sector can have a particularly big impact. “If you can bring energy to everyone, we can solve every problem: education, food, medical, mobility, heating, cooling, etc.,” says George Coelho, a senior advisor to Quadia, which provides private equity and debt financing to companies that are inventing a regenerative economy and driving global sustainability.

Tech entrepreneurs are taking up the challenge in a variety of other ways. A move to electric cars will have an important impact on the environment but battery life is still an issue. Enter Storedot, an Israeli startup presenting at Slush that makes an electric car battery it says can fully recharge in five minutes, allowing a driver to travel 300 miles without worry. Lithium-ion packs are also key for automakers banking on a new generation of plug-in vehicles. Northvolt, a Swedish company founded by Peter Carlsson, a former Tesla executive scheduled to speak at Slush, is aiming to cut the cost of storing power in half by building a €4 billion lithium-ion battery factory.

The objective is to build the world’s greenest battery, with a minimal carbon footprint and the highest ambitions for recycling, to enable the European transition to renewable energy, according to the company. Energy storage is seen as the missing link in the world’s shift to a zero-carbon economy. Batteries can fill power gaps from intermittent solar and wind energy. Another startup, Sonnen, a GE Ventures-backed maker of residential batteries, is doing just that. It has developed a home energy battery storage unit that connects to off-grid energy sources, allowing users to obtain, store and use free electricity from the community without needing to connect to a public utility. The batteries can also be used to balance out fluctuations in the public power grid, helping to stabilize it. This energy management service is provided thanks to a pool of thousands of sonnenBatterie units that are digitally linked to one another.

TenneT, a European transmission systems operator with 41 million customers, is trialing a service that uses the blockchain to harness Sonnen’s battery storage capability, helping it overcome issues related to so-called re-dispatch measures, which were designed to prevent regional overloads on Germany’s electric grid.

Blockchain to the Rescue

In Germany, there are restrictions on how much of the wind energy produced in the north of the country can be transported to the industrial centers in the south in order to prevent too much power from flowing through the grid at the same time.

Under the current system, energy suppliers in Germany make a forecast of how much energy consumers will use the next day. Then they go to an energy exchange or the operators of power plants, buy that amount of electricity and provide the information to TenneT, which runs a simulation of the electricity flows on the system to make sure there is enough capacity. If any of the calculations are off-base, TenneT might have to pay a power plant in the south to generate more energy and/or pay damages to a wind farm in the north that produced too much energy for the power lines to handle. That is where Sonnen comes in. In the pilot project, a network of residential solar batteries is being made available to store the energy, helping reduce the imposition of limitations on wind energy at times of insufficient transport capacity. The blockchain presents TenneT with a view of the available pool of flexible battery power. If activated, the blockchain records the batteries’ contribution, enabling the integration of renewable energy sources into the German electricity supply system.

As energy demand continues to rise, particularly in emerging markets, due to growing populations, ongoing urbanization and rising wealth levels, startups are stepping in with energy efficiency solutions.“Smart Grid, storage, distributed generation, energy efficiency solutions for buildings — start-ups are playing a role in all of these areas, especially software, now that renewable generation is more commoditized in wind and solar PV,” says Coelho. “And don’t forget that mobility and the rise of electrification and self-driving and car sharing will also cause changes in the energy business which start-ups will serve.”

If pundits are right, the energy sector is likely to continue to generate powerful opportunities for startups for some time to come.