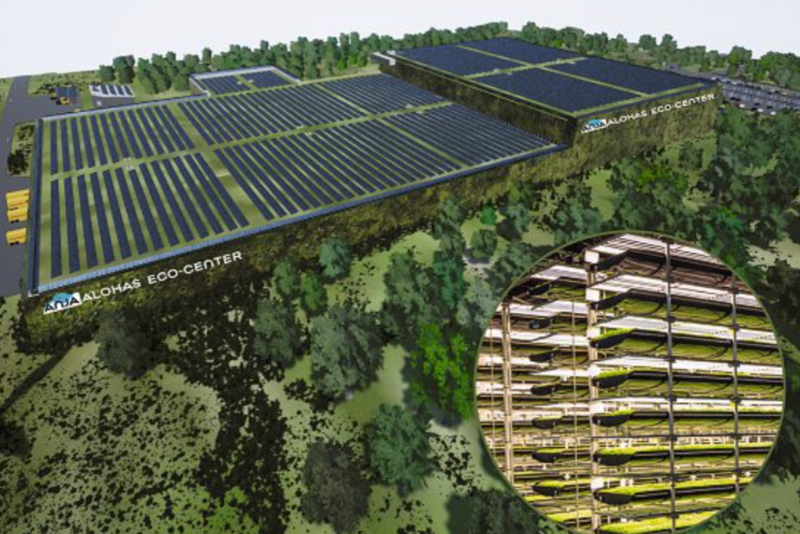 — An eco-friendly gigafactory for energy, agriculture, food and beverages being built in Germany could serve as a model for the industry

Food production has a stronger negative impact on the environment and climate than any other industrial sector,”says Marc Buckley, an international expert on vertical farming and renewable energy. The environmental damage is calculated to be more than 224% of the industry’s EBITDA.

Buckley, an ardent environmentalist who grew up on a farm, is out to prove that it doesn’t have to be that way. He and a small team of experienced entrepreneurs are the co-founders of the ALOHAS (Adaptive Lifestyle of Health and Sustainability) ECO-Center, an eco-friendly gigafactory for energy, agriculture, food and beverages being built in Germany that could serve as a model for the industry and be deployed in other cities.

If it works as planned, once it opens later this year the 400,000 square meter plant will be able to feed and hydrate 500,000 people comfortably all year long. The ECO-center is called a gig factory due to the amount of energy it will be able to produce: the equivalent of six factories — and because it is gargantuan in size. The center will produce 80 megawatts per day of renewable energy, mixed between solar, wind and hydrogen power and store 150 megawatts per day in Tesla Powerpacks and Aquion salt water batteries. Only an estimated 15% of the generated electricity will be used by the facility. The rest will return to the local grid. Buckley estimates the plant could provide the yearly energy needs of 380,000 people. The ECO-center plans to extract five million hectoliters of drinking water per year, the equivalent of 200 Olympic sized swimming pools. It will be able to produce over 299 metric tons of food a year.

When built it is expected to be the largest vertical firm in the world (the equivalent of ten factories under one room) and produce no greenhouse gases. The factory is being designed by William (Bill) McDonough the author of the book Cradle To Cradle: Remaking The Way We Make Things, a globally recognized leader in sustainable development.

The ECO-Center will incorporate vertical farming methods, the practice of producing food in vertically stacked layers. It expects to harvest one million metric tons of salad and vegetables a day. ECO-Centers could be built elsewhere and serve as an infrastructure or resilient back-up for major cities in times of disaster, helping in the aftermath of disasters, such as the hurricane that hit Puerto Rico, wiping out most of its crops and shutting down its electricity, says Buckley. He says he approached several of the world’s top food and beverage companies about partnering on the project. All refused. Buckley wasn’t surprised because, he says that most of them make a great show of green pilot projects but even when they are very successful don’t adopt the models in other facilities.

So he decided to build the first sustainable European circular economy based innovation system for agriculture, food and beverage production on his own, to prove it can be done and run profitably. It plans to generate revenue from five different sources: integrating renewable energy into the electrical grid and into storage, providing co-packing and filling for the beverage and food industry, becoming a wholesale supplier for supermarkets, restaurants and canteens, selling its own food and drink products and generating income from a 500 person rest stop, ECO store, charging location for electric vehicles, space rental, events, conferences and a visiting center.

“The ECO-Center will be a pioneer in the transition to global food reform and set the example of how the agriculture, food, and beverage industry can be healthy for humanity and our environment,” says Buckley. “It addresses 12 of the 17 UN Sustainable Development Goals and I believe this example will impact millions of people and help the industry reach the 2030 agenda goal to remain below 1.5 degrees of warming.”