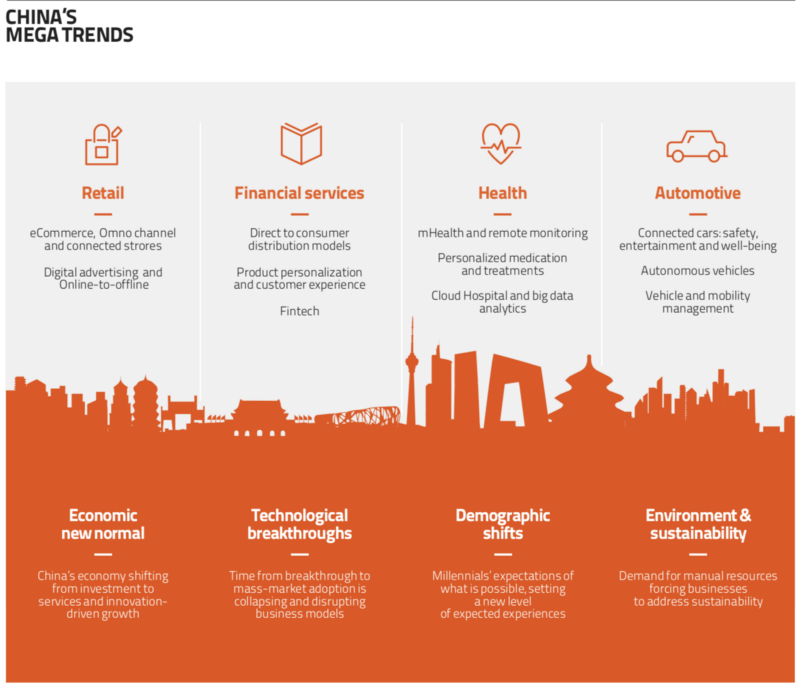 — Retail, health, financial services, entertainment and local services are all being transformed by technology and the new business models.

China’s big tech companies aren’t content with using their core businesses of search, ecommerce and gaming and social messaging to dominate the world’s largest Internet market. Baidu, Alibaba and Tencent (which are collectively known as BAT) are positioning themselves to become the artificial platforms of the future, disrupting a whole host of traditional industries, including automotive, retail, financial services and predictive healthcare. In November 2017 the Chinese Ministry of Science and Technology announced that the nation’s first wave of open AI platforms will rely on Baidu for autonomous vehicles, Alibaba Cloud for smart cities and Tencent for medical imaging and diagnostics. In each of these areas BAT is starting with a local focus on China and going global through international deals and partnerships, notes a CB Insights report. In April 2017 Baidu announced an open platform called Apollo for autonomous driving solutions, attracting partners from across the globe.

The idea is to accelerate AI and autonomous driving research by opening it up to contributions from other players in the ecosystem. Apollo currently has over 95 partners, according to a report by CB Insights. By comparison the U.S. ride hailing service Lyft, which announced its own open-platform initiative for autonomous driving last year, has fewer than 10 partners. Announced partnership deals make clear its ambitions for China and foreign markets. Baidu and the automaker Chery plan to jointly roll out Level 3 self-driving cars in China by 2020. (Level 3 vehicles are capable of taking full control and operating during select parts of a journey when certain operating conditions are met.) And it has created a $200 million joint venture fund with Asia Mobility Industries to invest in autonomous driving tech in Singapore. That deal is “Baidu’s first overseas expansion with the prospect of commercially releasing driverless cars outside China,” the report says.

China is expected to have a tremendous global influence over design, operating rules, and sales of autonomous vehicles, since breakthroughs in each of these areas are expected to be driven by companies like Baidu and regulators. For its part Alibaba, the country’s largest e-commerce provider, is focusing on a broad range of new business sectors, including smart cities, retail and financial services.At the core of Alibaba’s AI cloud platform is “City Brain,” which crunches data from cameras, sensors, social media feeds and government data, among other things. It uses AI to predict outcomes across healthcare, urban planning, traffic management and more.

A Huge Push at Home and Abroad

City Brain, which was first tested in Alibaba’s hometown of Hangzhou, has since been adopted by other Chinese municipalities. Alibaba made its first international smart city deal with the Malaysian government this year.

The first phases of City Brain are primarily focused on traffic management. To this end, Alibaba has partnered with NVIDIA for its deep learning-based video platform for smart city services. It also participated in a $600 million venture capital round in SenseTime, a computer-vision startup that specializes in surveillance technology, which is considered the most valuable AI startup globally. It is partnering with SenseTime on smart transportation, urban management and intelligent surveillance. Alibaba has also pioneered online-offline (O2O) retail in China. It has invested over $9 billion in brick-and-mortar stores since 2015, including a 36% stake in China’s top hypermarket operator, Sun Art Retail Group. Counting all its investments, Alibaba is now the largest offline retailer in China as well as the largest online, says a report from Oliver Wyman, a global management consulting firm. And its affiliate Ant Financial is disrupting financial services. It operates Alipay, China’s most popular mobile payment wallet, an investment fund, micro-loans, insurance services, a digital bank and more. Altogether, it claims to reach more than 450 million users via its products.

Meanwhile, through its investments and partnerships Tencent is bringing healthcare to AI tech from around the world into mainland China. These efforts underpin China’s huge push to be a world leader in genomics and personalized medicine using AI, according to the CB Insights report. Tencent’s biggest strength is that it owns WeChat. Known as the “app-for-everything,” it is the most popular social media platform in China with more than one billion users, offering everything from messaging to money transfer and ride-hailing. Around 38,000 medical institutions have WeChat accounts, of which 60% allowed users to register for appointments online, and more than 2,000 hospitals accept WeChat payment. The ability to collect huge amounts of consumer data gives Tencent an advantage as the health care system shifts to digital services.

And it is striking partnership deals and making investments to strengthen its foray into this sector. Last April it partnered with Babylon Health, a UK- based startup which is developing a virtual healthcare assistant. WeChat users will have access to Babylon’s app, allowing them to message their symptoms and receive feedback and advice. It has also partnered with UK-based Medopad, which applies AI to patient monitoring. And it has invested in the AI startup iCarbonX, which is building a consumer-facing AI platform that is a one- stop shop for all things health and wellness — from skincare and nutrition recommendations to behavioral health and genetic analysis. Tencent is focusing its internal R&D on developing a healthcare AI platform called Miying. Launched in 2017, Miying provides healthcare institutions with AI assistance in the diagnosis of various types of cancers. It also uses AI to assist hospitals in analyzing and managing health records. There is speculation that it may also expand into pharmaceutical applications of AI. Tencent participated in two AI in drug discovery deals this year: a $45 million venture capital round in Atomwise (alongside Baidu Capital) and a $15 million round in XtalPi, according to the CB Insights report.

Part of the impetus for BAT to expand into new areas is competition from a new crop of Internet companies that have emerged known as TMD: the news platform Toutiao; Meituan-Dianping, a platform for lifestyle services and products; and the ride-hailing firm Didi Chuxing. Both BAT and China’s long-established news portals are investing in machine learning to tailor feeds for users of their news services, but Toutiao, which has first-mover advantage, has a stated ambition of building the company into the world’s largest platform for information creation and distribution.

As BAT moves into autonomous cars, Didi is expanding globally and branching out into the autonomous vehicle market. Meituan was created through a 2015 merger between the rival companies Meituan and Dazhong Dianping, which were backed by Tencent and Alibaba. Tencent has since become the main backer of the new combined company, while Alibaba cut its stake in Meituan-Dianping, and instead invested $1 billion in May in the rival service Ele.me. Meituan, which has a valuation of more than $55 billion, is currently planning an IPO on the Hong Kong exchange that could make it the world’s biggest Internet-focused listing since the e-commerce giant Alibaba Group’s $25 billion New York float in 2014.

Although Alibaba still dominates in ecommerce, Pinduoduo, a social commerce platform that allows people to order products at discounted prices by grouping together on the social messaging service WeChat, is now the country’s third-largest e-commerce platform, according to a 2018 report on China’s Internet sector created by the South China Morning Post and 500 Startups, a Silicon Valley investment fund and seed accelerator. Pinduoduo raised $1.6 billion in its July initial public offering on NASDAQ, giving it a market cap of just under $30 billion.