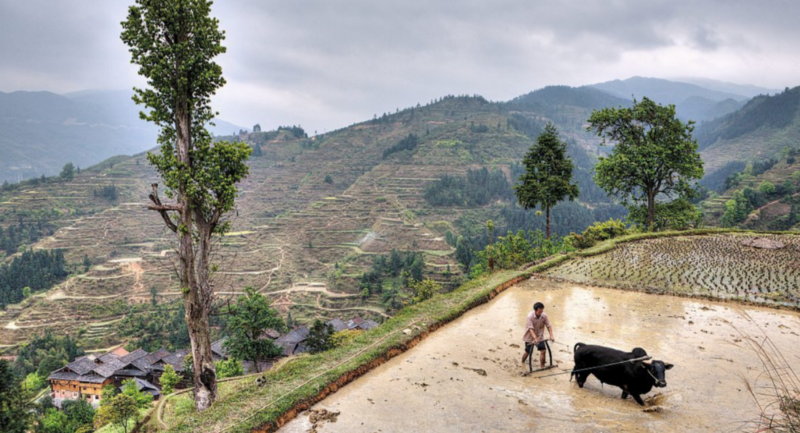 — The country, which now accounts for 40% of the world’s e-commerce business, is pioneering “online-to-offline,” or O2O, retailing, in which customers use digital channels to buy from physical businesses.

Retailers announced plans to shutter more than 6,700 stores in the U.S. in 2017, more than any other year in retail history, according to Fung Global Retail & Technology, a retail think tank.The situation is completely different in China, where Internet giants are breathing new life into physical stores, including supermarkets, malls and Mom and Pop shops. China has a term for this new trend: online-to-offline, or O2O.

E-commerce players are realizing the limits of a purely online model in some segments, and are establishing a physical presence. Physical retailers need the tools of e-commerce, and are obtaining them by partnering with e-commerce players. Alibaba has invested over $9 billion in brick-and-mortar stores since 2015, including a 36% stake in China’s top hypermarket operator, Sun Art Retail Group. Counting all its investments, Alibaba is now the largest offline retailer in China as well as the largest online, says a report from Oliver Wyman, a global management consulting firm. Alibaba’s Hema supermarket spearheaded O2O shopping in China. It helped crack one of the hardest areas for online retail: fresh food. Customers like to see, feel, and smell it before buying, which is not possible online. Another challenge is delivery speed, says the Wyman report. An average Chinese household makes five shopping trips a week to buy fresh products to cook and eat that day. But online shopping sites for electronics and apparel normally deliver food too late. Alibaba’s Hema supermarkets have the appearance of regular supermarkets with plenty of fresh food on display. But they operate quite differently.Shopping at Hema is a smartphone-powered experience — you can do it from home or in the store. When you’re in the store, you’re able to scan a bar-code with your phone to get product information. Payment is also cashless, done through the Alipay platform embedded in the Hema app. Among Hema’s attractions is the ability to choose your own fresh seafood and decide whether you want it to go home with you — raw or cooked — or have it prepared to eat in-store.

Hema had opened 46 stores in 13 cities as of May 2018 and recently announced 24-hour delivery service for its stores in Beijing and Shanghai, according to a 2018 report on China’s Internet sector compiled by the South China Morning Post (SCMP) and 500 Startups, a Silicon Valley venture fund and accelerator. Rival JD.com, China’s second largest e-commerce player, launched its first offline fresh-food supermarket, called 7Fresh, in Beijing in January of this year. The new store has 4,000 square meters of floor space and smart carts which guide shoppers to their desired aisles. 7Fresh has cooked food stalls, offers fresh food and provides delivery within a five- mile radius, allowing users of the service to receive groceries in 30 minutes. Meanwhile Tencent, which runs the social messaging app WeChat, has invested heavily in Super Species, the fresh grocery store brand of Yonghui Superstores. Superstores employs a hybrid model of high-end supermarket plus fresh food restaurant and O2O.

JD.com is also bridging online and offline by opening over 5,000 online-to- offline home appliance stores through franchising, according to the Wyman report. Consumers can check sample machines and place an order on JD.com by scanning a dedicated QR code in store. JD will then arrange home-delivery and provide after-sales service.

Alibaba is also modernizing China’s malls, equipping stores with “virtual shelves.” If a shopper doesn’t find his size or color in stock, he can still select the product he wants on a screen, punch in size, color, and other specs, scan with an app, and have exactly what he wants delivered directly to his home. Alibaba and JD.com are also aiming to transform some six million convenience stores across China, says the SCMP and 500 Startups report. Alibaba and JD have launched the Ling Shou Tong and Zhang Gui Bao initiatives aimed at integrating local convenience stores into their ecosystem by providing modern analytics and operations. For example, Ling Shou Tong offers a suite of digital services to improve efficiency, including a mobile app to order inventory from a single source, consumer analytics to determine highest selling goods and even mobile/data top-up plans.

For its part JD.com has announced ambitious plans to open one million convenience stores by 2021, primarily in smaller cities using a franchise model, according to the Wyman report. It will supply the stores through the JD.com wholesale platform, which already serves hundreds of thousands of independent shops. The arrangement will increase JD.com’s scale, making its logistics network more efficient and helping it to negotiate favorable terms with suppliers. These efforts are helping Chinese e-commerce retailers break down some of the remaining barriers to digital shopping.

They are already doing a pretty good job at it. E-commerce has grown faster in China than in any other large market in the world, according to the Wyman report. Online retailers have made big investments in delivery infrastructure and e-payments, which are being taken up by a digitally advanced population. More than 40% of the world’s e-commerce transactions currently take place in the country, up from 1% about a decade ago, says a report about trends in China’s e-commerce landscape scheduled to be released at the World Economic Forum’s Annual Meeting of the New Champions in Tianjin, China, Sept. 18–20. In addition to the merger of offline and online retail, the report identifies four trends in Chinese e-commerce.

Cross-border e-commerce between China and the world is helping drive globalization, according to the Forum report, which was authored by Ziyang Fan, the Forum’s project head of Digital Trade and Data Flows and Joel Backaler, managing director of Frontier Strategy Group and author of “Digital Influence.” In 2016 the market size of cross-border retail e-commerce sales in China was $78.5 billion, with the same figure expected to exceed $140 billion by 2021, says the report. This is due to a record number of Chinese going abroad to work, study and travel and gaining exposure to more international brands.

When they return home to China these shoppers rely on cross-border e-commerce to purchase international products that are either not available domestically or are too expensive in local flagship retail outlets within China. And, due to concerns around consumer and food safety, Chinese consumers are turning to cross-border e-commerce as a route to access trusted international brands for categories such as baby, health and nutrition, beauty and food products. Consumers can either use Chinse cross-border e-commerce platforms like Alibaba’s Tmall Global or JD Worldwide or they can rely on unofficial overseas sellers know as Diagou, agents that reside in foreign markets, purchase authentic merchandise overseas and then utilize local platforms like WeChat and Taobao to reach Chinese consumers.

China is leading the way in establishing what are special custom zones with streamlined processes and innovative models to speed up cross-border e-commerce transactions, the Forum report says. Existing import-export structure was applied to digital cross-border e-commerce pilot zones three years ago in 13 cities. The pilot was so successful that 22 more locations have been approved across China. Chinese e-commerce companies such as Alibaba are now promoting special trade zones for e-commerce products elsewhere, such as in Malaysia and Thailand.

Digital influencers are also helping to drive e-commerce. China has its own group who produce content ranging from articles posted to WeChat, China’s do-everything social messaging app, to social media livestreams, the report says. Influencer live streams especially are leading to outsized e-commerce market growth. According to a recent Deloitte report, live streaming in China will lead to $4.4 billion in direct revenue this year, with influencer livestreams set to reach as many as 456 million viewers.

The future of e-commerce in China will increasingly take place in rural, inland regions where there is still tremendous room for growth, says the Forum report. These rural consumers leapfrogged PCs and use their mobile phones to access the Internet and make purchases online. JD.com and Alibaba are developing logistical networks to help flesh out their services to the Western region of the country. JD has announced plans to build 185 drone airports in Southwest China to use for deliveries. And Alibaba is in the process of scaling its rural e-commerce platform, including a recent $716 million investment in Huitongda, an eight-year-old rural-focused platform with 80,000 member stores in 18 provincial-level locations. These types of services are an important driver of economic and social development that is powering transformational change across the country, the report says. Indeed, some 50% of poor villages in China are expected to be equipped with e-commerce capabilities by 2020, according to the SCMP and 500 Startups report. There are already 2,100 so-called Taobao villages — rural villages where at least 10% of households sell goods online, with annual sales of at least $1.6 million. These villages account for $19 billion in annual sales and have created 1.3 million new jobs.