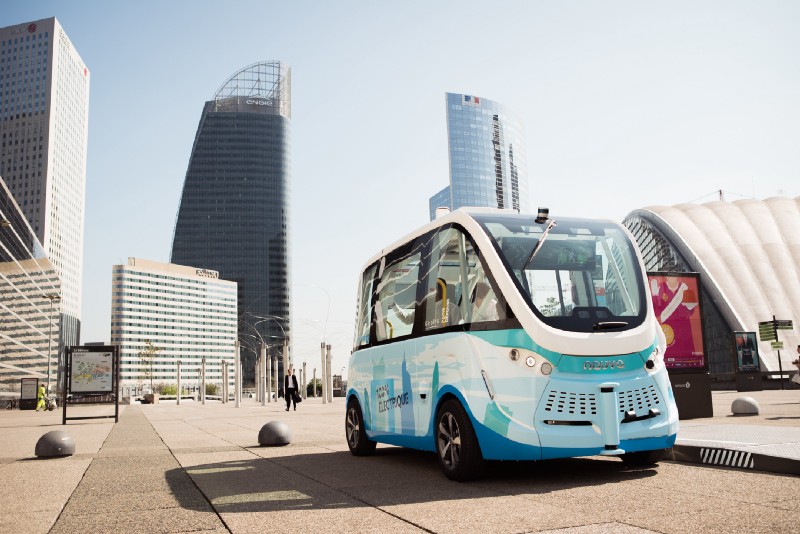 While much of the hype around autonomous vehicles has focused on passenger cars, the most advanced emerging use case is less sexy but more practical: self-driving shuttles that are already being used to ferry people in retirement communities, industrial complexes, shopping centers and airports.

European companies, new and old, have an early lead but are facing growing competition from Chinese and U.S. rivals.

“We are seeing newcomers making strong investments,” says Nicolas de Cremiers, head of marketing for Paris-based NAVYA, one of the earliest autonomous shuttle companies. “The competition will be very strong. I don’t know what the real future of the market will be. But it is 100% sure that there is a market.”

NAVYA makes the kind of boxy, slow-moving vehicles that shuttle around passengers in defined areas.

But self-driving shuttles embrace a much broader range of vehicles. Mercedes-Benz’s “Future Bus” is among them. The company demonstrated the bus — which uses its CityPilot autonomous software, in Amsterdam but it is not expected to be market ready for some time.

Chinese Internet giant Baidu has developed 14-seater autonomous “Apolong” buses in collaboration with Chinese bus manufacturer King Long. The buses are already being deployed in several Chinese cities, with plans to introduce them in Japan by year’s end. These buses are capable of Level 4 autonomy: They can mostly drive on their own and need human intervention only under some circumstances when the special maps they rely on aren’t available. (Apolong buses run on the Baidu’s Apollo autonomous driving platform, which underpins its broader ambitions for self-driving cars. Apollo, which is open source, is now being used by Valeo and Jaguar Land Rover.)

On the other end of the spectrum are “robot-taxi” services, such as the partnership between ride hailing leader Lyft and Dublin-based Aptiv which together deployed a fleet of 30 self-driving cars in Las Vegas. Aptiv acquired Ottomatika, a Carnegie Mellon University spinoff in 2015 for its software and systems development for self-driving vehicles.

And Voyage, a spin-out of Udacity University which was briefly chaired by Sebastian Thrun, the German founder of Google’s self-driving car project, has already launched autonomous car shuttle services in retirement communities in California and Florida.

Waymo, the self-driving car unit owned by Alphabet, Google’s parent company, has conducted its own trial in Phoenix, Arizona with Walmart and shopping mall owner DDR to bring shoppers to stores after they purchased an item online. Waymo said it will continue to study such retail partnerships with an eye toward an eventual national rollout.

The U.S. market also includes a number of other new entrants. Local Motors, a Phoenix-based manufacturer, has developed a self-driving electric shuttle dubbed “Olli” that is built using 3-D printing and open source tools at “microfactories” around the country.

And in Michigan, May Mobility has now raised $34 million in venture capital for its autonomous driving platform, which is being used by some manufacturers to build low-cost shuttles. Shuttles using May Mobility’s technology are roaming streets in Columbus, Ohio and Detroit, Michigan. And with investors such as BMW and Toyota, it’s one more sign of the potential many see in this market.

A number of technical challenges must still be overcome before autonomous vehicles become commonplace on the roads, says Sam Abuelsamid, a principal analyst at Navigant Research, who tracks the autonomous vehicle market. Shuttles that have the ability to geofence their movements are a more interesting option in the short term with a clearer business model, he says.

They’re also appealing as cities rethink urban mobility. As more people move to cities and they become more crowded and more polluted, urban leaders are becoming more aggressive in trying to redesign public and private transit, from scooter sharing to new forms of public transportation. Shuttles that can move people between public modes of transport could play a critical role in these new mobility systems. “They will not solve all the problems of urban transport,” says Abuelsamid. “But having shared autonomous vehicles will be an important part of an overall mobility system.”

That’s NAVYA’s vision. Founded in 2014, the French company has focused exclusively on developing electric autonomous shuttles. The company raised €80+ million in venture capital in 2018 and has recently opened a sales office and manufacturing facility in Michigan. The company has sold more than 115 shuttles around the world in more than 20 countries. Some of the fleets have been running for several years now. Due to legislation, all its shuttles still have a human on board, but NAVYA says it is hopeful that will begin to change soon.

“What we see in the near future is removing human operators from operations,” says de Cremiers. “For that, we really need to have a global regulatory framework. It’s not in place yet, but it’s coming.”

While NAYVA is regularly ranked as one of the leaders in this space, there is no firm data about the number of self-driving shuttles operating. One of its rivals is EasyMile, based in Toulouse, France, which has raised €22 million in venture capital. The company’s fully-electric autonomous shuttle, the EZ10, transports up to 15 people and is being used at over 200 sites worldwide, including on the grounds of a factory in Sorigny, France owned by TLD Group, a maker of aviation ground support equipment. An EZ10 shuttle carries employees 1.5 km round trip to the company’s cafeteria. More recently, in the U.S., the Utah Department of Transportation and Utah Transit Authority has launched an autonomous shuttle pilot using an EasyMile EZ10. The shuttle will travel the state giving free rides to get feedback from the public as the state considers adopting more of them.

France is also home to AutoKAB, short for Automation Kits for Autos and Buses. As the full name suggests, the company makes technology to allow current vehicles to convert to being autonomous. The company evolved out of France’s National Institute for Research in Computer Science and Automation, where researchers had started a program to develop a public transit system using electric, automated vehicles in the mid-1990s.

Having defined the market, these French players are watching warily as somedeep-pocked competitors target the market.

That said, NAVYA says it is confident its experience and long track record of testing will help it maintain an edge. And while it’s prepared to fight for deals, in some ways the growing attention validates the vision such early movers had when the rest of the market was more focused on consumer vehicles, de Cremiers says.

“When we started there were just two or three players,” he says. “And this market was not obvious for everybody back then. But now that we are in 2019, based on what we achieved, we can see that we have been going in the right.