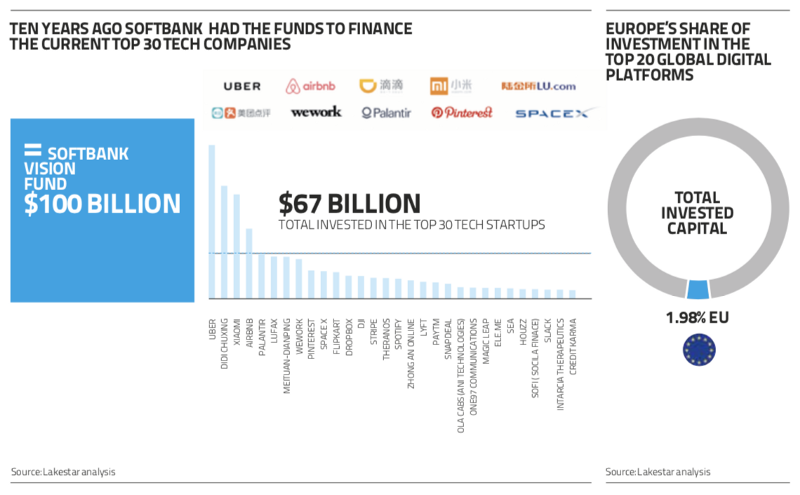 The World Economic Forum Digital Europe initiative hopes to put the building blocks in place to help the Continent become a global leader.

Large players from Asia and North America are leveraging digital platforms to grab market share from established companies. Europe is lagging in the digital transformation of industries key to its success in the Fourth Industrial Revolution. It is also behind in investment in new technologies, such as artificial intelligence, where it captured only 11% of global corporate investment and venture capital in 2016 compared to 50% in the United States and 39% in China.

The potential to become a global innovation leader is there. But to move forward the building blocks need to be put in place. That’s the mission of the World Economic Forum’s Digital Europe initiative, which is being supported by the Forum System Initiative on Shaping the Future of Digital Economy and Society. The Digital Europe project is a collaborative effort of the World Economic Forum and McKinsey.

The Digital Europe team has spent the last year consulting with entrepreneurs, investors, corporate and public figures and representatives from academia across Europe to try and create a common vision, identify action areas, and develop concrete suggestions to make European innovation ecosystems more successful, and identify an innovation model that will allow it to effectively compete with other regions.

“Europe needs a new ambition: to compete for global innovation leadership,” says a Digital Europe project report on the topic, which will be released during the Forum’s annual meeting in Davos, Switzerland on January 22- 25. “In addition to mitigating issues and catching up, Europe will need to develop its own, more ambitious innovation model, anchored in its strengths.” The foundations of this model are ten fundamental building blocks for the competitiveness of Europe’s innovation ecosystem which are outlined in the report. These include a pan-European approach; corporate start-up collaboration; innovation funding; enabled government and public institutions; data access and protection; entrepreneurial talent, digital education, reskilling and upskilling, gender diversity; digital infrastructure and interoperability and harmonized legislation and standards. One of Europe’s big handicaps is that it does not have any of the large platform companies that in recent years have come to dominate the technology world and capture large revenue shares. To compete globally, Europe needs to scale. The Digital Europe initiative has come up with four catalysts it hopes could help Europe achieve scale by “supercharging” across all ten building blocks:

— Creating cross-sector innovation strategies and platforms for high- potential industries, including regulatory sandboxes for experimentation, and cumulative funding of €80 billion to eliminate the R &D funding gap with the U.S. *Leading on goverance for data access and trust by fostering secure platforms that make transparent which data are shared and when, and that allows citizens to change access rights for data sets.

— Boosting talent pools through initiatives such as doubling the number of female tech entrepreneurs.

— Doubling the share of digital innovation requirements in tenders for Europe’s €2 trillion annual public procurement spend.
Three flagship projects are being considered for launch in 2019, the report says. One is a European Sovereign Wealth Fund that could leverage private funding sources from across Europe, including institutional money, such as pension funds, and issue debt. Its key objective could be to provide scale-up capital for start-ups and for cross-sectoral, cross-border integration projects with multiple industrial players.
Creating a Forum Centre For The Fourth Industrial Revolution for Europe to drive public-sector digitization, standardization and citizen-centered data access is another option as is the creation of a Women Entrepreneurship Network to increase the diversity of talent.

Overcoming Challenges
The report says action is needed because Europe cannot realistically hope to outcompete the United States and China on their terms because
— Its markets are more fragmented, making it harder to offer the same
scale.
— It lacks deep-pocketed tech giants to fund the next wave of innovation — Its citizen-focused regulatory stances and mindsets can’t sow the radical
disruption of business models.
— Its governmance structures, make heavy public investment and other
intervention more difficult or slower than, for example, in China.

For Europe to have a chance for success in becoming a world leader in digital it will need to catalyze its own strengths. The report lists these as a highly skilled population, including in science, technology, engineering and mathematics (STEM), a history of collaboration and standard-setting; an industrial base that is leading in manufacturing and service sectors and the fact that it has many market leaders among its small and medium sized businesses.

Lakestar venture capital firm founder Klaus Hommels, one of Europe’sbest-known tech investors and an early backer of Spotify, Facebook and Skype, says there are other reasons to be bullish about Europe. Hommels, a scheduled speaker and discussion leader at a planned Digital Europe session in Davos, notes that it was 2011 before more than ten European unicorns were created during a twelve-month period. But the numbers started to rise sharply thereafter, reaching more than 50 in 2016, and 69 in 2018. This has broadened and deepened the ecosystem becauseit cre¬ates experienced entrepreneurs who have the confi¬dence to createmore new companies, he says. Exit values are also increasing as the European ecosystem matures. In the early 2000s, Skype’s exit value was the biggest to date at $3.2 billion. But since then Spotify had a $30 billion exit and startups Adyen and Farfetch both created unicorns through IPOs in Europe — as have others such as Zalando and Delivery Hero. “The flywheel has finally gotten moving,” says Hommels. However, he notes that Europe falls short when it comes to investments in crucial digital infrastructure companies like Amazon, Apple, Google and Microsoft.The biggest 25 digital platforms which are not publicly listed raised €67 billion in the last eight years and Europe represents less than 2% of the cap table. “We as a Continent represent around 20% of the global GDP and there is a lot of wealth in Europe so this is ridiculous,”says Hommels. “Funds like Softbank’s can easily finance the next 20 most decisive companies in the next 10 years and have a role in both their cap table and corporate governance,” he says.

He adds “it is very important that the new industries get decently fundedin Europe so that we keep some of those defining industries here ».Europe may have “lost the war for B2C but on the B2B side there is a lot to be won so there is an urgency for politicians, regulators and corporates to create a favorable framework around the ecosystem we are building,” Hommels says.