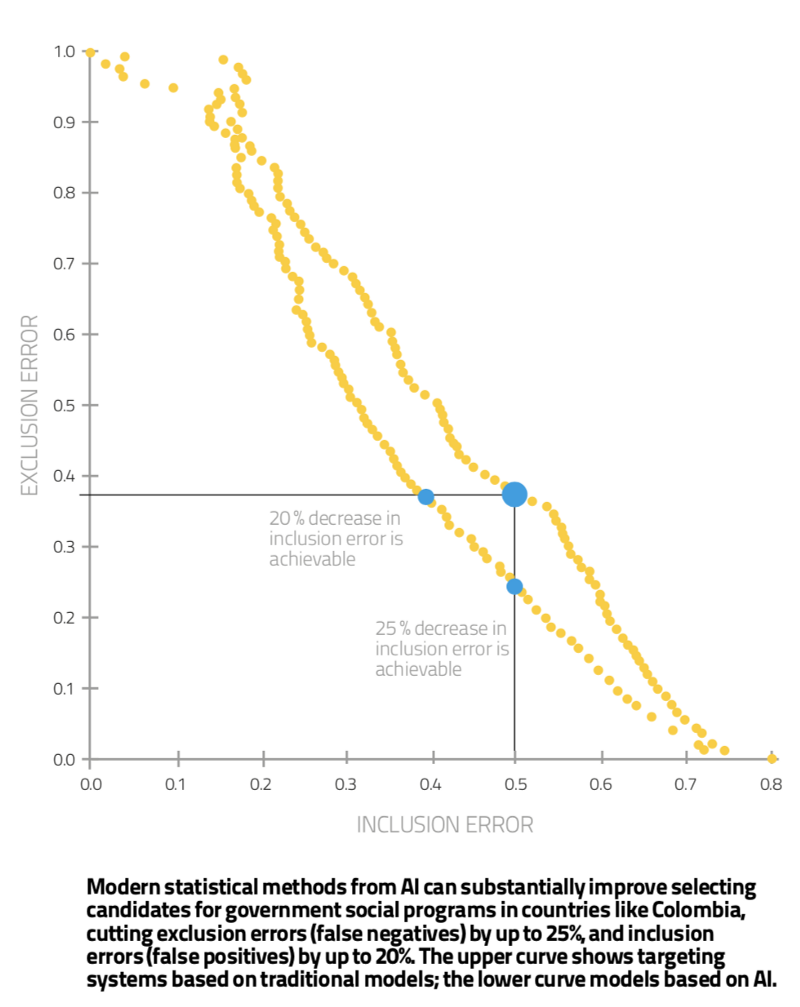 Colombia is pioneering the application of cutting-edge technologies for the public good.

It is testing the use of artificial intelligence (AI) for fair and efficient targeting of candidates for government social programs and the ethical extraction of data from private enterprise for the public good. And, it is examining how it could use blockchain to fight corruption.

The government is testing the use of data collected by AI to more fairly access who is eligible for government cash transfer payments to the poor. Across Latin Ameria 35% of the people in the program don’t belong there and more than 35% of the people who need the stipends aren’t receiving them. They just don’t know which 35%,” says Alejandro Noriega, a PhD candidate at the MIT Media Lab whose research focuses on the use of human and artificial intelligence in social decision systems. His research lies at the intersection of decision sciences, artificial intelligence, causal inference, policy, and economics. In the past few years he has conducted applied research projects with the United Nations’ Big Data initiative (Global Pulse), the national governments of Colombia, Mexico, Andorra, and Saudi Arabia.

Initial results in Colombia are promising, says Noriega, who recently returned to the U.S. after organizing a four-day workshop for government officials on the use of AI for targeting social policies.

If successful the same technology — developed at the MIT Media Lab — could be applied to the 115 national cash transfer programs operating worldwide. In Latin Amercia alone some 80 million households receive $8.5 billion in government cash transfer payments each year, representing 0.3% of the region’s GDP, says Noriega. These payments cover targeted programs such as education scholarships or money to buy food. Ensuring that the right people receive the money can have a big impact.

« Improving large-scale social programs in developing countries is one of the paramount near-term opportunities of the AI revolution, which can swiftly benefit a hundred million lives, and save billions, he says. »

Separately, the Colombian government is working with MIT Media Lab on another program: OPAL, a not-for-profit project that has found a novel way to extract private sector data for the public good from private enterprises in a variety of sectors. Other participants in the project include mobile operator Telefonica Colombia and the World Economic Forum, among others, in close cooperation with the government. Colombia and Senegal are the first two countries to pilot the project. Data collected will be used to help alleviate poverty, aid rescue efforts during emergencies and help improve education and public services. The hope is that OPAL’s platform can serve as a model and eventually be adopted across the globe.

The government is not stopping there. During the World Economic Forum’s annual meeting in Davos in January, the government of Colombia and the city of Medellin announced they would collaborate on the first Centre for the Fourth Industrial Revolution in Latin America. Based in Medellin, the Centre will be affiliated with the World Economic Forum’s global network of Centres and will focus in part on a transparency project focused on anti-corruption. « We are planning to look at how do we use the potential of blockchain to increase access to immutable information in a way that reduces corruption and defines who has access to what and when, » says Sheila Warren, the World Economic Forum’s Blockchain and Distributed Ledger Head.

The Centre in Medellin is also expected to look at how to apply AI to projects to optimize bus routes; encourage the use of public transport by improving travel times, safety and quality; reduce pollution by increasing the use of shared vehicles; generate information in real time for public transport users to increase the movement of people; and optimize the network of local traffic lights.