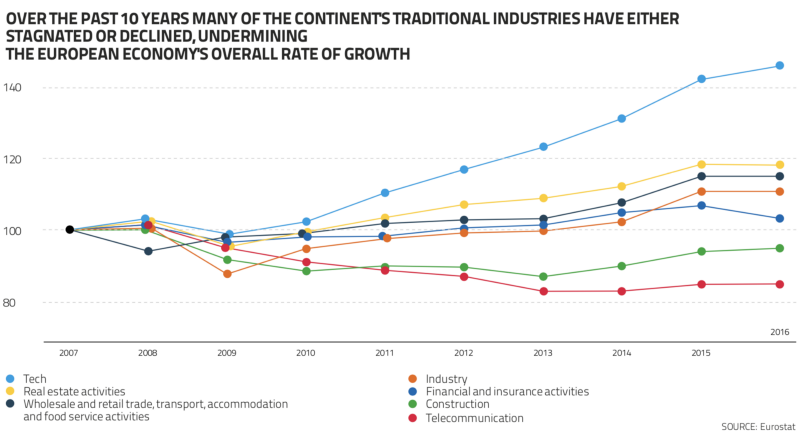 One of the Continent’s biggest handicaps has been the inability of its startups to scale thanks to a lack of growth funding. The good news is Europe now has a swelling group of unicorns, companies with valuations of $1 billion or more. Expect that number to rise. At this year’s Viva Technology conference in Paris 30 scale-ups are competing in a contest to name Europe’s next unicorns. Among them is France’s Shift Technology, which is ranked as one of the top 100 AI companies in the world.

But the lack of late stage capital from European sources means that even when high-growth companies stay here the value flows elsewhere.

London-based Deepmind one of — if not the best -artificial intelligence company to come out of Europe is now owned by Google while N26, a Berlin-based digital challenger bank with a valuation of $2.7 billion, has raised most of its $500 million in capital from foreign investors. (See the story on page 13). And one of four new unicorns, Belgium’s Collibra, which has developed a data governance platform, reached that status in January after it raised a $100 million Series-E funding round led by CapitalG, the growth equity investment fund of Google’s parent company, Alphabet.

Against this backdrop, the Digital Leaders of Europe, a group comprised of over 80 entrepreneurs,investors, heads of incubators , corporate leaders and public figures convened by the World Economic Forum, is examining how to close the gap in scale-up funding for startups in Europe, says Martina Larkin, the Forum’s Head of Regional Strategies-Europe and Eurasia and a member of its executive committee. The Digital Leaders of Europe is looking at « how best to leverage private funding across Europe, the role of institutional capital and the possible creation of new financial vehicles, » she says.

« We need to work to get European private money into the ecosystem to foster entrepreneurship, » says German serial entrepreneur Felix Staeritz, a board member of the Forum’s Digital Leaders of Europe and Digital Platforms & Ecosystems working groups and a Founding Partner of Factor10,an independent corporate company builder.« We are building unicorns in Europe but we don’t provide them with enough growth capital and then they have to raise money from Asia and the U.S. to keep on growing, which is totally ridiculous, » he says. It is time to change regulations in Europe which limit pension funds from investing more than a small percentage in risk capital, says Staeritz. The same constraints do not exist in the U.S. « The total share of how much money can be invested into risk capital is way higher in the U.S.– they have so much more growth capital, » says Staeritz.

Leveraging more private funding here would have multiple benefits, says the Atomico report. “If pension funds rebalance their allocations away from legacy industries towards game-changing technology instead, they can democratize access to the spoils of European tech.”