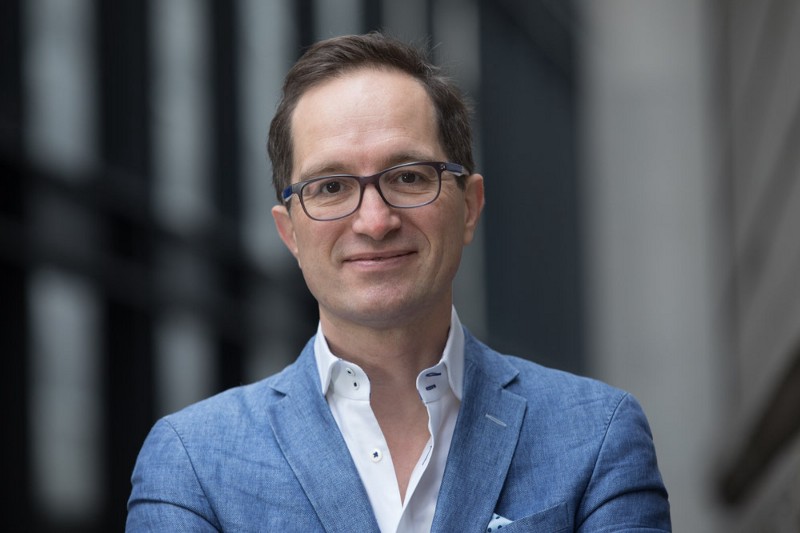 Peter Hinssen is a serial entrepreneur, author and keynote speaker on the topics of radical innovation, leadership and the impact of all things digital on society and business. His fifth book, The Phoenix and The Unicorn will be published later this year. His other books include The Day After Tomorrow, The Network Always Wins, The New Normal and Business/IT Fusion.

Hinssen’s first company e-COM was acquired by Alcatel-Lucent, his second, Streamcase, by Belgacom, and Across Technology by Delaware Consulting. His third venture, Porthus, was quoted on the stock exchange in 2006 and acquired by Descartes. Between start-ups, he worked as an Entrepreneur in Residence at McKinsey & Company, with a focus on digital and technology strategy. His current company Belgium-based nexxworks connects corporates with what is happening in the world of innovation. He recently spoke to The Innovator about how companies can adapt to a period of radical change.

Q : You built four tech companies. What made you switch gears and advise corporations on innovation ?

PH : I worked in startups for 15 intensive years and I saw that technology could bring something entirely new to business so I was flabbergasted to discover that the tech people — the IT people — inside corporations were slowing things down. I started to look at what are the mechanisms that are needed to spur the growth and potential — first on the IT side and then on the strategic side — for large organizations to re-invent themselves. Many companies don’t even see what is right behind the horizon. It is a simple mental model : How much time do boards and management spend on today, on tomorrow and on extrapolating on the day after tomorrow? Today new technologies and new concepts are developing so quickly that it is changing the rules of the game. When I speak to corporates they ask me to show them an example of a 100-year-old company in their sector that has transformed itself. The reality is most companies will never be unicorns but they can become a phoenix — that mythical creature that rises from the ashes. Companies going through a horrible time can reinvent themselves and come out stronger at the end of some of these disruptions. I have had the good fortune to see a number of phoenixes in action. For example, I spent a lot of time with Walmart in the last two years. This giant in retail has been under enormous pressure from Amazon and is having to reinvent itself. My new book is about what can we learn from these phoenixes and how other companies can become a phoenix in their own markets.

Q : Can you point to other examples ?

PH : There are plenty. Disney is a really interesting case. The company has been around for a long time and it was getting a little stale. But then a radical transformation happened : It bought Pixar, Marvel and Lucas Films and it understood the power of technology for digital transformation. This is what we are seeing now in TV. They have taken control of Hulu and are launching their own version of Netflix. Disney is proof that even established companies can successfully embrace cultural transformation, strategy, technology and the changing needs of customers and do amazing things. Up until recently it has been difficult for big companies to attract the talent they need. When students graduate if they have the choice of going to work for some boring bank struggling with transformation or work for Facebook, Google or Amazon the choice was easy. This is why there has been a shortage of talent for quite some time but this is starting to change. Some of the people at Walmart charged with transformation like Tom Ward [SVP Digital Operations, Online Grocery & Last Mile] could easily work for Amazon and Google but are gaining an enormous amount of satisfaction from the impact they are having on the Walmart machine. It is a very interesting period. How you motivate and incentivize help in the age of the phoenix is crucial.

Q : Even if you put the right people in place how do you ensure that top management and the rest of the organization heeds their advice ?

PH : It is the number one reason so many attempts at transformation fail. You need a number of things to achieve success. The first, going back to the Walmart example, is if there wouldn’t have been Amazon there would not have been the same sense of urgency. Companies have to go through near death or go up against someone who can eat their lunch to have the same sense of urgency. Number two companies have to really understand and have a clear vision of where they want to go, as well as the right mindset, which is the third characteristic. If they reinvent themselves too much — if what they are doing is not close enough to the core proposition — they will fail; and the fourth thing is you need executive support to make it happen. I have seen so many examples of companies that have promised they are going to work on disruptive innovation but when push comes to shove, they don’t. And finally, companies need a clear shared ambition and they need to trickle that down from the very top to everybody. If they do all five things the right way they have a good chance of succeeding. If they fail on one it will be a lot harder. If they fail on two it will be nearly impossible. Willingness to change is essential but putting it into practice is incredibly challenging.

Q : What do you see as the biggest challenges?

PH : A lot of companies have figured out the customer side of this. They have understood that customer behavior is changing. Their marketing departments have transformed and are using the power of data and understand the importance of analytics. But there is an enormous disconnect between the commercial side and the organizational side and that disconnect in my opinion is growing by the day. How we think about employees and how we think about organizations needs to change. HR could learn a lot of lessons : there are no analytics inside HR and it is anaemic on the data side. HR needs to step up their game to make digital transformation a success. Secondly, incubators and accelerators are fashionable but they generally give poor results. The reason is quite simple : it is considered a fringe activity and in many cases is cosmetic. If a company wants to truly reinvent itself it has to figure out what it wants to be the day after tomorrow and put that at the core. And finally leadership itself has to change. We need to reinvent the MBA for the 21st century. MBA courses have been teaching the same recipe for the last 50 years. In the 20th century it was all about scale and efficiency. Today it is about dealing with uncertainty and disruption and radical change and we are not preparing leaders to deal with that. If you see many boards today they are very far removed from the reality of fundamental change. To fix that issue we need to move away from « Jack Welch [the former GE Chairman and CEO] is the answer to everything. If you recruit versions of Elon Musk [founder of SpaceX and a co-founder of PayPal and Tesla] into organizations run by versions of Jack Welch they will be underused and extremely frustrated. In order to have alignment between the traditional part of your business which is all about effiency and scale and the more fluid future part of your business and truly reinvent yourself it will be necessary to combine two different types of leadership and abandon a one-size-fits-all approach.

Q : What is nexxworks role in helping companies reinvent themselves?

PH : We don’t focus on consulting. We try to connect corporates with what is happening in the world of innovation but we also put companies together to learn from each other. It is, for example, difficult to put two pharmaceutical companies together because they compete , but if you go to another field, another market, you can get a completely different perspective on similar challenges. There is a network effect that allows corporates to learn and benefit from each other.