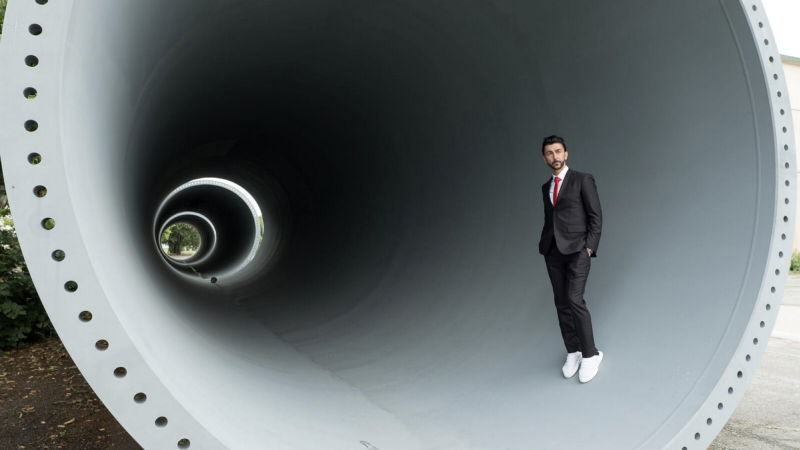 Hyperloop Transportation Technologies, a 2018 World Economic Forum Technology Pioneer, hopes to transport us to the future in more ways than one. It is not only working on a high-speed levitating train that is expected to dramatically change inter-city travel; it is changing the way people think about building companies and just might change the way the entire global transportation ecosystem is organized.

HyperloopTT has crowdsourced its design and early financing and the development of technology necessary to transport people in capsules pushed through giant tubes at speeds of over 700 mph. It even uses the power-of-the-crowd to manage the company, prompting Harvard Business school to write a case study about the company.

The genesis for this novel approach to open innovation came after SpaceX and Tesla founder Elon Musk posted a design document for a moonshot product authored by Tesla and SpaceX engineers, entitled “Hyperloop Alpha,” in 2013. HyperloopTT co-founder Dirk Ahlborn, a native of Germany, received permission to post the white paper on a crowdsourcing platform he created called JumpStartFund.com and asked participants if the hyperloop could or should be built. Hundreds of people responded enthusiastically and some shared hyperloop designs and ideas. So, Ahlborn and co-founder Bibop Gresta, a tech industry veteran who got his start as an Italian pop star, devised a plan to create a version of a hyperloop transportation system through the power of the crowd.

“We knew it needed a very big effort and that the money needed was too much for what could be raised through traditional methods so we decided to do it with a call to action to whoever wanted to join,” Gresta, the company’s chairman, said during a recent interview in Dubai. “Scientists from all over the planet started contacting us. We also knew that the majority of the technology we needed already existed inside labs or companies, so we took the same approach with them and asked them if they would be willing to join the effort.”

Today HyperloopTT is working with 40 big companies and organizations including government transportation agencies, universities and research and development labs. Over 900 individuals such as engineers, designers and technology experts collaborate part-time. Digital tools are used to track work on the project and compensate contributors, who mostly work virtually as independent contractors, with stock rather than paychecks.

While the company uses a flat team-based structure more senior and experienced members of the ecosystem known as “hyperleaders” take responsibility for ensuring team members are actively engaged in accomplishing the work of the ecosystem. The Harvard Business School case study outlines how the company organizes cross-team projects into “sprints,” using a so-called “agile/scrum” approach to designing complex software systems, with a product team owner responsible for delivering the work product and a small set of team members who signed on to do the sprint over a short period of time. For example, the case study notes that HyperloopTT’s successful project proposal in Abu Dhabi was completed in less than two weeks involving contributors in engineering, marketing, production, finance and media relations — none of whom were full-time — and led by a product team owner who was also a part-time contractor.

Tapping into the power of the crowd not only allows HyperloopTT to connect with a large pool of people to work on projects, it inspires those that it attracts to go above and beyond, says Gresta. The development of a carbon fiber composite material that will be used in its futuristic capsule is a case in point. Named “Vibranium” after the fictional substance used to protect the comic book character Captain America, the material is eight times stronger than aluminum and 10 times stronger than any steel alternative but much lighter, reducing the amount of energy needed to propel the capsules over long distances. A Spanish company called Airtificial (formerly known as Carbures) has been working on this material, which can be embedded with thousands of sensors that can relay real-time data on temperature, damage, and structural integrity. An engineer at one big aeronautics company, who moonlights at HyperloopTT, was able to improve the material even further, says Gresta. “It’s amazing, whenever we encounter a problem we simply ask the crowd and within a few days we will often have a viable solution.”

HyperloopTT has also hit on a novel way to attract government funding. Eleven governments around the world have already signed agreements that are in different phases of implementation with many committing millions of dollars to become members of the HyperloopTT’s crowd-powered ecosystem. This has enabled the company to raise over $100 million in in-kind contributions and around $40 million USD in cash. “This system can make money and pay back the state,” says Gresta. “Most transportation systems are subsidized by the government, we want to do the exact opposite.”

The ability to attract customers — i.e. governments — to pay for designing initial pilot tests, strengthens the bonds that hold the ecosystem together, says the business case study.

It notes that members of the crowd have also enabled the company to secure critical strategic and university R&D partnerships. For example, it has licensed its levitation technology from the U.S.’s Lawrence Livermore National Laboratory, which first started testing the technology back in 1995; partnered with Atkins — a leading global design, engineering and project management consultancy that had worked on complex infrastructure development projects for governments around the world — and developed a close working relationship with Leybold Vacuum, inventor of the vacuum pump. What’s more, the manufacturing value chain “has been completely redesigned with this model,” says Gresta. “We are not building, operating or maintaining any part of the production ourselves; we are licensing other companies to do it.”

Since the company launched in 2013 a number of other ambitious hyperloop companies have been created. The power of the crowd is one of HyperloopTT’s key differentiators, says Gresta. The company now has 39 patents and 56 trademarks. “We will be cheaper, faster to market and have less environmental impact than any other system,” he vows.

HyperloopTT, which is headquartered in Los Angeles, has signed deals to build hyperloop systems with governments in Abu Dhabi, France, Ukraine and China.

The first segment of HyperloopTT’s first commercial system is expected to be operational by October 2020. The project will include an “experience center” in Al Ghadeer, which is located between the United Arab Emirate cities of Abu Dhabi and Dubai. Visitors to the World Expo 2020 will be among the first in the world to to try out the company’s tubular transport system, Gresta says.

Once fully operational the capsules can move 20 to 50 people every 40 seconds, which translates into 3,600 people an hour or 160,000 passengers daily.

HyperloopTT says it is working on the passenger experience and innovative ways of generating additional sources of revenue, such as fees from advertising projected onto interactive windows or augmented reality entertainment services. And it might end up selling energy to others as the system is expected to generate more then it consumes.

But HyperloopTT doesn’t want to stop by designing only hyperloop systems. It thinks that the same approach could also be applied to overcome humanity’s other great challenges. “By tapping into humanity’s collective knowledge we can begin to conquer our greatest challenges at a fraction of the cost and time compared to what the traditional business model allows,” says Gresta.

“Whether it be energy, housing, food and, yes, transportation, what HyperloopTT is demonstrating is that when you put together the best and brightest minds in the planet to solve the biggest problems of humanity, something magical happens — they do it.”